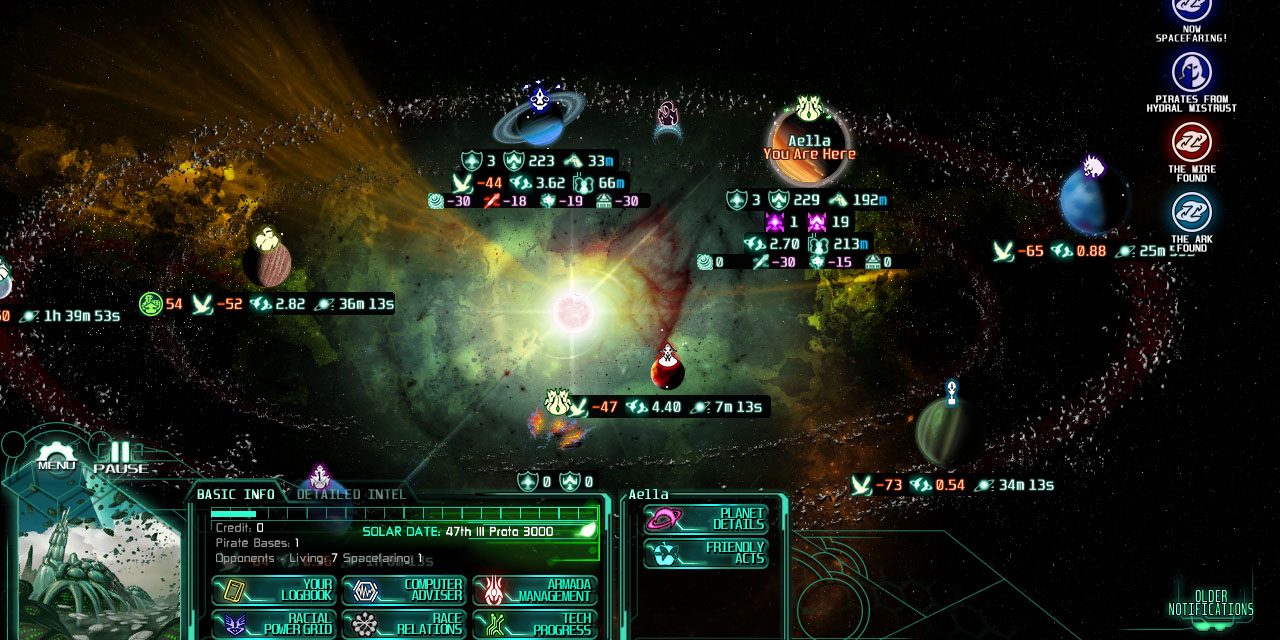 Version 1.600 is gargantuan, and aptly named.  This addresses a lot of the longest-standing balance/clarity requests for the base game… all at one time!  This was kind of an all-or-nothing proposition, and it took a bit longer than I expected.  Still, it’s done now, and I’m super proud of how it turned out.

60 very-boring-somewhat-confusing techs were removed from the tech tree, a ton of techs were changed quite substantially, and 19 all-new techs have been added.  The way that research happens is more balanced now, and proceeds at a more interesting pace.  Science Outposts have more of a clear and present purpose, and holding on to them can be key for both you and the AI to a degree that was never the case before.

Previously, the concepts of shipbuilding (for ships) and manufacturing (for buildings and outposts) were separate, and it was really confusing.  These have been merged together in a sensible way, and also completely rebalanced from the ground up, just like the science stuff was.  Manufacturing Outposts are also now more valuable, for you and for the AI, which again is great.

Ground combat is something that could get absolutely bonkers out of balance in the late game, mainly because it was using multiplicative math instead of additive math.  This was the problem with the other areas that are being rebalanced here, too.  The ground combat is now balanced a new way, and much more sensibly.  In the early and middle game, the results are pretty close to what they used to be, although there is more variance now in terms of decisions made during gameplay having larger effects (mainly in terms of which techs are or are not researched).  And in the late game, the ground combat stays sane.

This was a huge thing to rebalance, and really important.  Previously there were a lot of things that were really unclear, and those 60 “mark level for specific ship” improvements were a big part of that.  In general there was just a lot of decentralization and special-casing here, so that it was incredibly difficult to tell what was going on at a glance.

But even more than that, the general feel of the progression of this has changed.  There are now distinct jumps in power, rather than a slow small increase in power that is hardly noticeable.  I spent a lot of time working on making the jumps in power something that were noticeable, but not so severe that they were frustrating or game-ending.  I think I hit a good balance, but let me know what you think.

Why does it matter that the jumps are noticeable?  Well, it helps with tension, honestly, and makes it so that it MATTERS if you are behind on techs.  The new system also rewards you a lot more than before for unlocking more flagship abilities, too.  The way that races handle the space combat power upgrades is now entirely different in terms of their tech research, and it can make science play a much larger role in space battles than it previously did.

Overall what this does is create desperate swings in power at various times, so that you have a chance to suddenly seize a temporary opportunity or you have to compensate for a poor oversight.  You have a number of years before this really becomes a factor, and the computer adviser already tells you about this in no uncertain terms, so new players should be fine.  But there were some players who previously just kind of ignored these techs and yet were still successful… I don’t think that will be possible anymore, which is certainly by design.  But at the same time, I believe the “this is so complex and also so incremental that I don’t care to look into it” feeling that was causing the players to ignore these techs has been resolved.

And on the racial power grid and at each planet’s details screen, you can now hover over the ground power number and see a breakdown of WHY the number is what it is.  That’s understandably been a longstanding request, and it was something we had already done in the past for manufacturing and science.

On the racial power grid, you can also see this same breakdown for the ship power multiplier.  This is something that is completely centralized, so there’s nothing needed anywhere else.  For ground power there is a local component for defenders, hence being able to see it in both places.

Military Outposts have a completely different function, now.  They buff the space multiplier and the ground troop multiplier, end of story.  They don’t produce armadas or anything like that.  This plays a lot nicer with Betrayal mode, which is good.  But it also just makes more sense and is more clear with the AIs, too.  Even in the standard federation-formation mode (or Invasion mode, for that matter), you can use military outposts gifted to the right races to really help shore up their weaknesses.  Or ones for yourself to help increase your own flagship’s power.

The AI for how the races deal with outposts in general, and what they prioritize building, has been completely reworked.  The races are much better now at trying to shore up their weaknesses with the use of outposts, or to in general stack onto their primary goal (aka Thoraxians with space power).  Previously it was a bit more generalized, not as good.

In the prior version, Invasion mode was basically “you die now” mode.  I had fixed the AI for the Obscura, and they were then just running amok.  In looking at how to fix that, I was realizing that I really needed to go ahead and switch to the additive model for the space power and science and all that jazz.  So hence the long foray into all the great base game updates that make this release so huge.  Anyway, with all of those things in hand, I also did a bunch of balance work on Invasion mode.

This mode is still quite hard, but how hard depends on the strategic difficulty you choose.  On normal, the Obscura tend to win within 60 years, typically.  They don’t lose. 😉  On Easy, they’ll still tend to win within 60 years, but sometimes they’ll lose even in observer mode.  Rare, but it happens.  On strategic difficulty modes higher than normal, the situation gets increasingly dire increasingly fast.  So basically you need to wipe out the obscura pretty quickly, or else you’re frankly going to lose.

In general when it comes to invasion mode, if you get into a long stalemate, you’ll eventually lose.  On the higher difficulties for this mode, the only way to win is to basically play a “rush” style of game, in the Starcraft sense, where you deny them resources and expansion power, and just cut them off before they get started.   Any way you play it, though, the strategies required for invasion mode really are incredibly alien to that of the main game mode.

Betrayal mode was already in better shape compared to Invasion mode in the prior version, but one of the big frustrations was trying to direct your ground troops around.  You could wind up in very long-term sieges just because your ground troops didn’t have armadas to ride over to the enemy planet with.

Fear not!  It’s now possible to place attack beacons on planets, which basically tells your servitor robots to hop into personnel pods and launch themselves at the target planet even without an armada escorting them.  This only takes effect when the enemy armadas are all destroyed, so you still have to suppress the armadas with your fleets.  But while you’re doing so, you can make it so that you get a constant influx of angry mindless robot slaves hacking away at your enemies on the surface, which I think is what we were all looking for in the first place. 😉

There’s also a variety of smaller stuff.  Various bugfixes to do with the expansion, balance updates to deal with the pirate ravens from the base game, and so on.  In observer mode there is also a new window that lets you spy on the current actions and research of all the races.  You can’t normally see this in the real game, but it’s quite interesting to look at in observer mode and understand better what races are planning before it happens.

“Paradigm” is such a horrible word, but it’s appropriate at least.  I’ve incremented the version number to 1.6, since this version is so vastly different from the 1.5-era and before.  It’s a much clearer game now, I think, and I’m actually surprised just how much more fun I’m finding it to play.  Not that it wasn’t fun before, but it’s just so… immediate now.  I’m the lead designer, and things are immeasurably clearer to me as I play, making it so that I can make good decisions faster as a player.  If that’s the effect it has for me, I can only imagine (slash hope) that it has an even better positive effect for everyone else who hasn’t spent a thousand hours staring at this. 😉