It’s been sixty-six days since the last major release writeup, with THIRTY-FIVE releases in all, and notes starting here and ending here.

We are now in a mix of multiplayer alpha and beta!  (Depends on how you play, some methods are feature-complete and others are not.) If you want the full info on multiplayer’s current status, the place to look at that  is here.

Okay, this would be a really really long digression, but I hope you take a moment to click over and read about the legacy of Badger and Puffin.  Both have retired from working on the game fully (although both still hang out and occasionally poke things in), and so I’m now the sole remaining active developer on the game.

With that being said, this is “news” as of a month and a half ago (for Badger — for Puffin, it was much earlier this year), and we’ve had 28 releases since Badger retired, so I do okay on my own.  This isn’t a cause for concern, but rather a moment to take stock of their achievements and celebrate them.

It’s also worth noting that Badger is still doing some remaining work here and there on DLC2, and he’s already decided to return and is working on content for DLC3.

You might have noticed the new main menu if you’ve logged into the game in the last month: 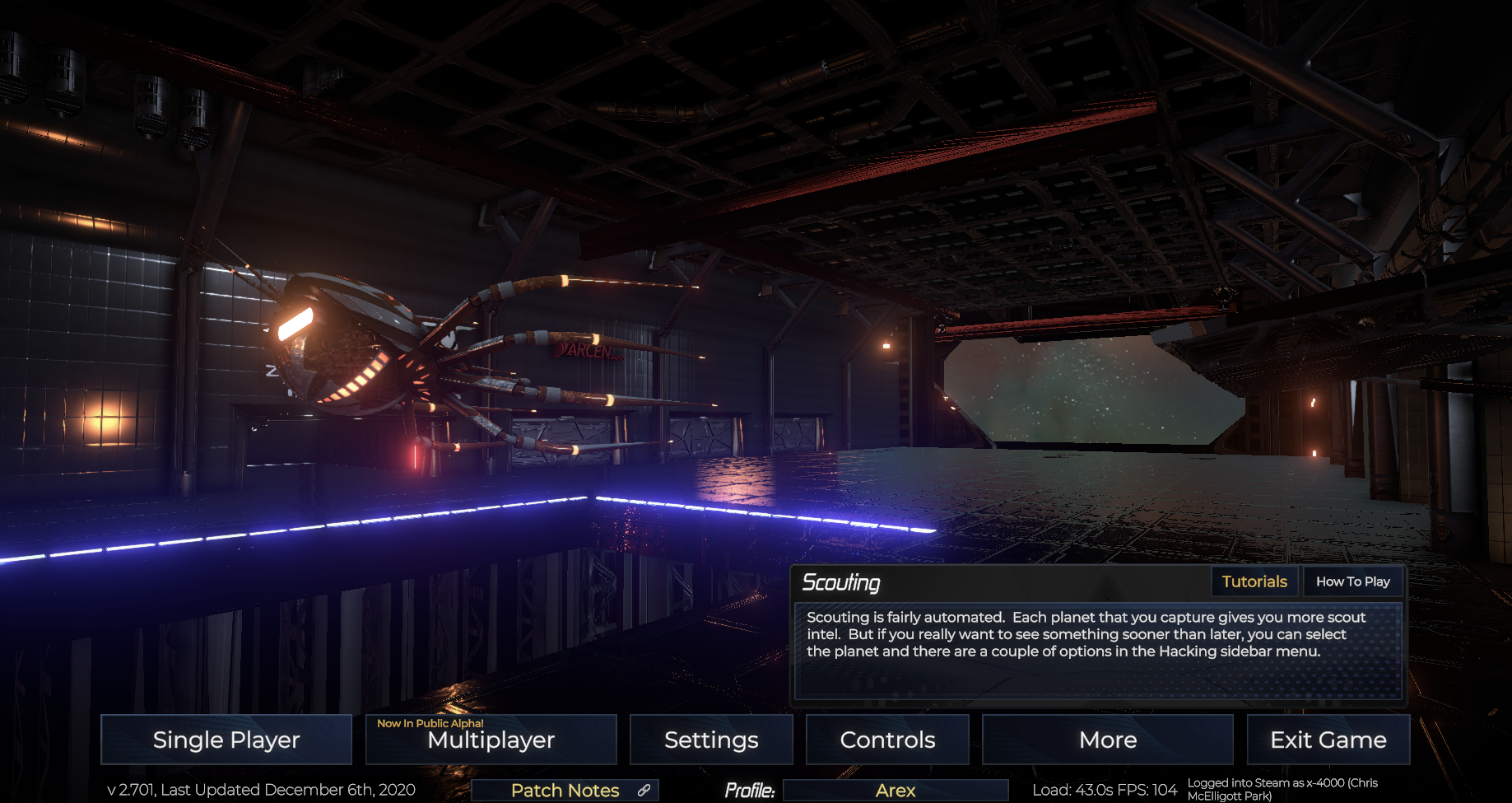 If your computer fans turn on and your FPS is only like 30, please don’t freak out.  This is actually the (by a really large margin) most intensive scene in the entire game.  I get 90fps on it and in the game on my main dev machine, and a measly 30fps on my under-min-sys-requirements mac computer, but it’s usable on both.  Even my below-specs mac is getting like 60-90 fps in-game with ship models turned off.

The main menu might seem like a strange thing to revise, but it’s the first thing that you see when you load up the game.  We wanted something that felt more epic and exciting, and that had a darker and more appropriate thematic feel for the game.  Personally, I also wanted a view from inside a spaceship looking out, since usually we only ever see spaceships from the outside during actual gameplay.

I also majorly updated the ending scenes (both win and loss), so those are more epic now.

Okay, so for one thing I did a complete visual overhaul of what buttons look like, and backgrounds on all the UI bits, and things like that.  This no longer feels vaguely website-ish.  It feels like… well, like a hardcore strategy game with a lot of space themes.

But that’s not all we did.  There are new functions for doing searches for units or planets by name on the galaxy map.  There are a ton of new galaxy map filters that show more information of various sorts.  You can easily see where threat is, or the hunter or warden, etc.  You can edit planet names, set priorities per planet like the first game (but with more options), add narrative notes to planets, and more.

You can also ping planets or locations on planets, and you can ping with multiple colors to help communicate meaning while you’re discussing on voice chat.  The notices up at the top of the screen now have backgrounds that indicate their severity/importance, and are automatically sorted by that.

There’s also a new fleet status window that Badger added despite being retired (he actually did a ton of QoL stuff in the last month, since he was actually starting to play both on his own as well as with his family and friends and thus noticing more things).  The fleet status window is particularly helpful for keeping an eye on what is going on in your empire, or in all the empires of players in multiplayer. 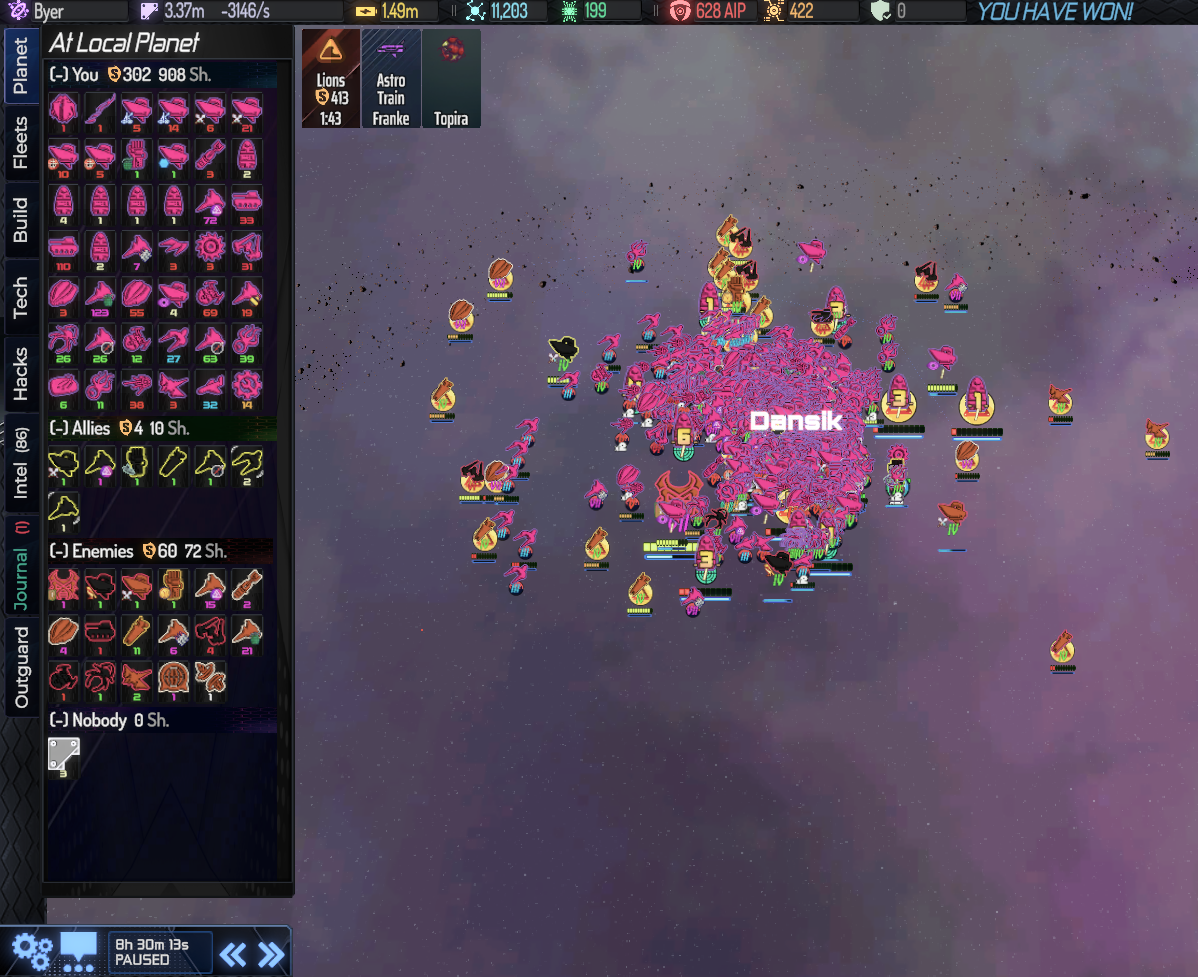 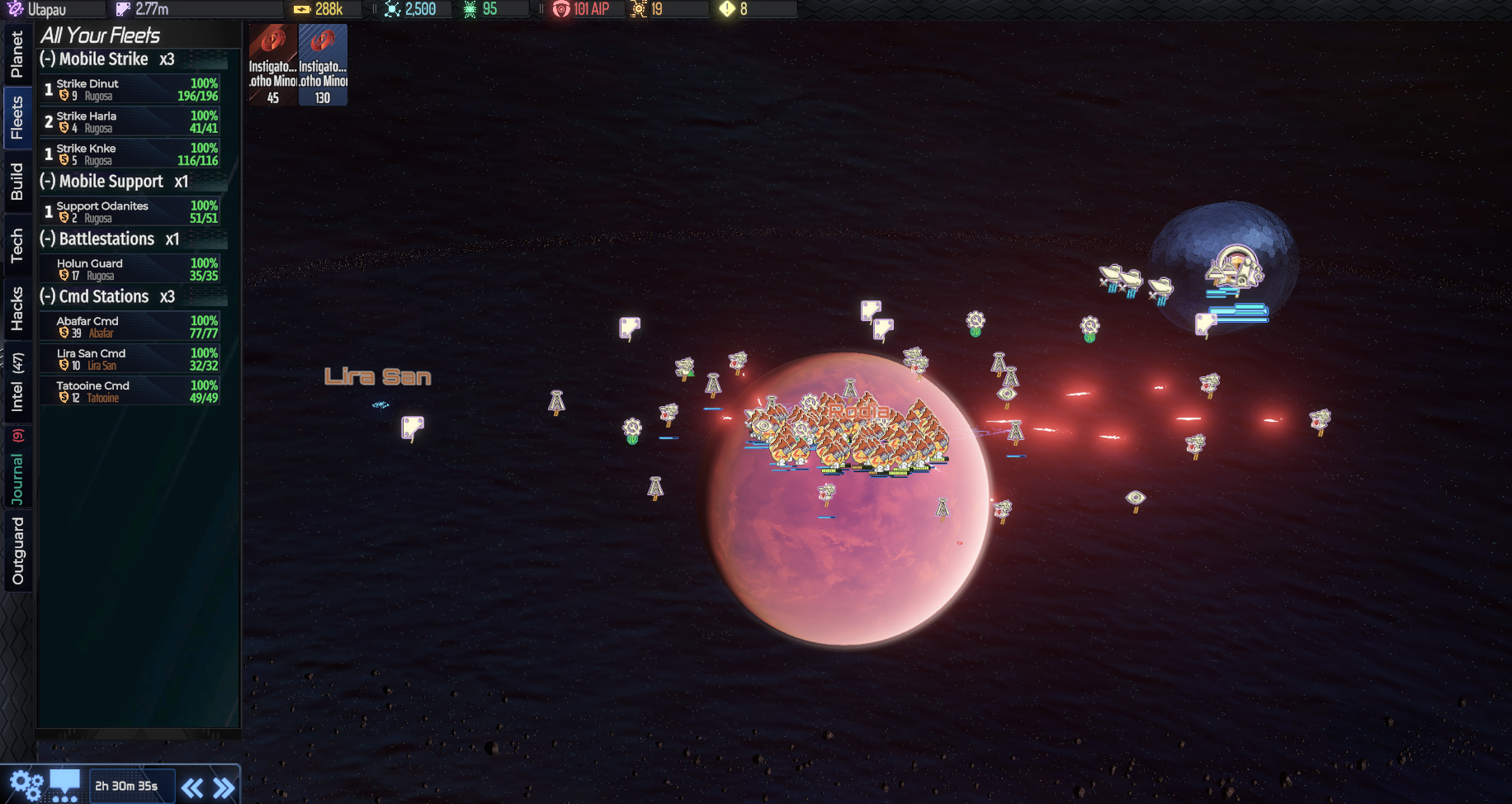 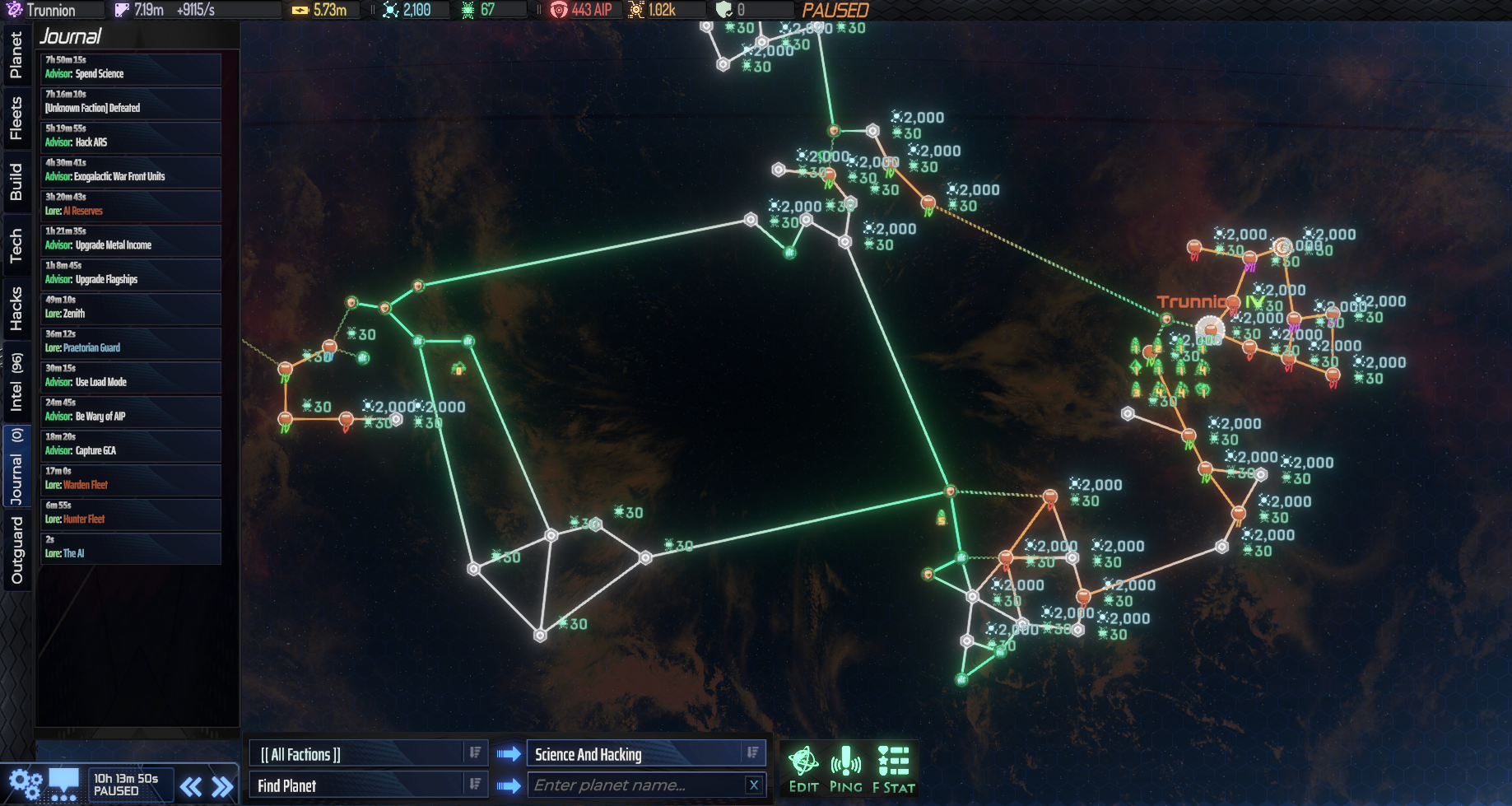 Other Visual And QoL Improvements 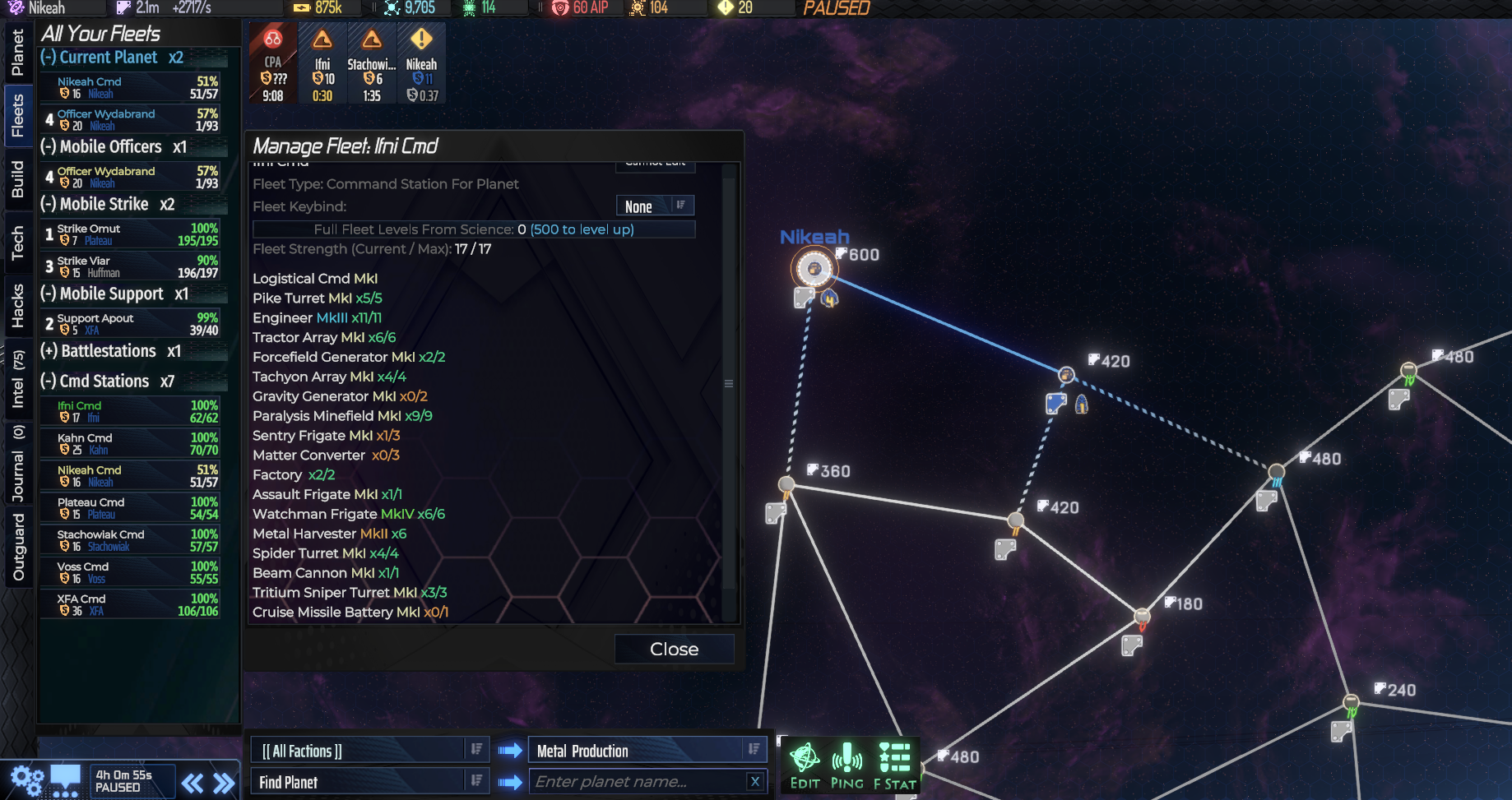 What’s Else Is New? 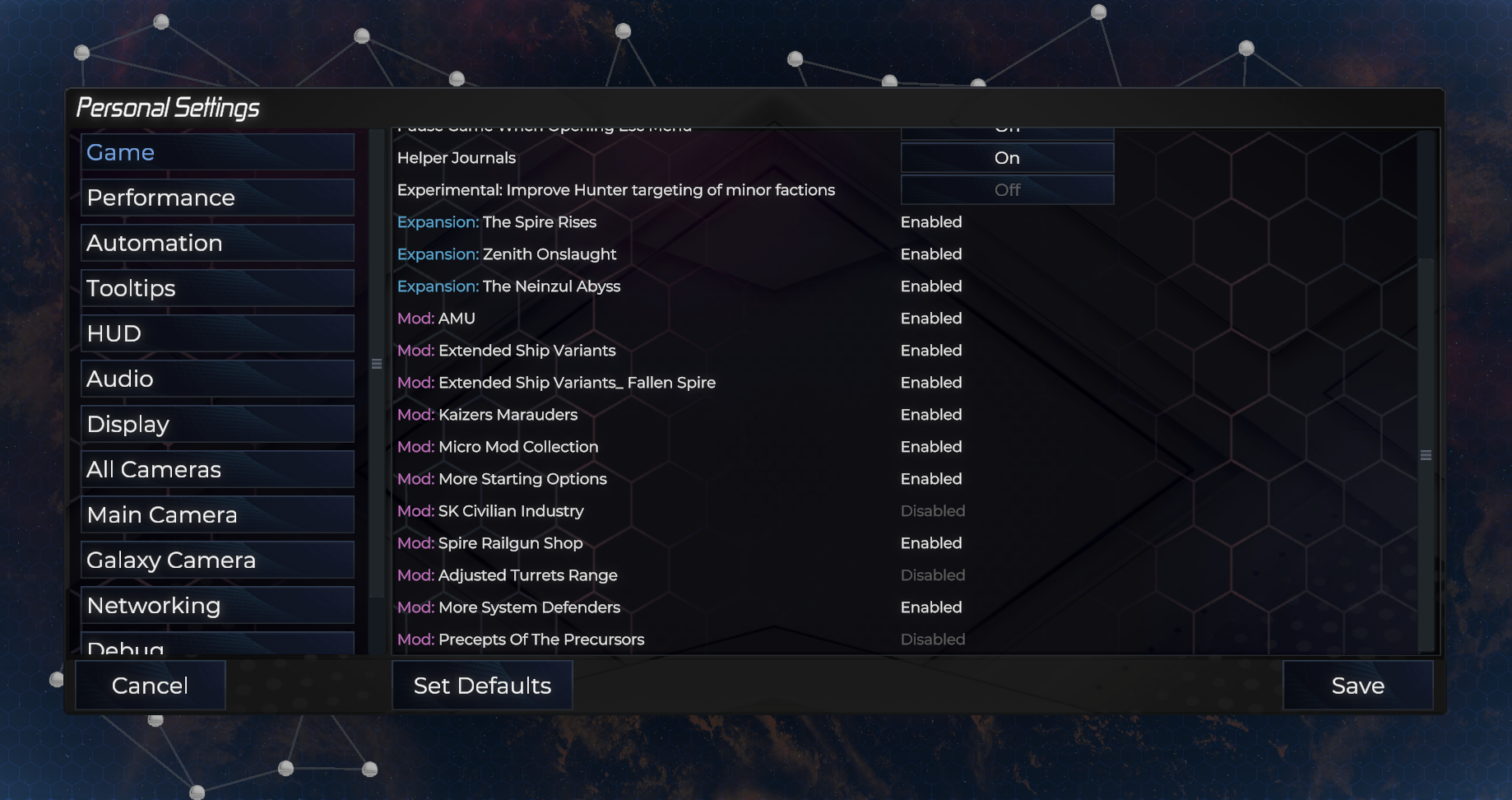 There are two ways of playing: a shared faction, which is now in beta and thus basically complete aside from bugfixing; and multiple faction, which still has some known issues and missing features and thus remains in alpha.

I expect to sort out the remaining known issues, while fielding ongoing bug reports, over the next 1-2 weeks at the most.  At that point, multiplayer is effectively finished aside from just giving it time to collect any more bug reports people come up with.

One thing I should point out is that this is an insanely complicated game from a technical standpoint, and so the more testers the better.  The game might be working perfectly for most people in most situations, and then you come along with your friends and run into something catastrophic and wonder how anyone could possibly play this. 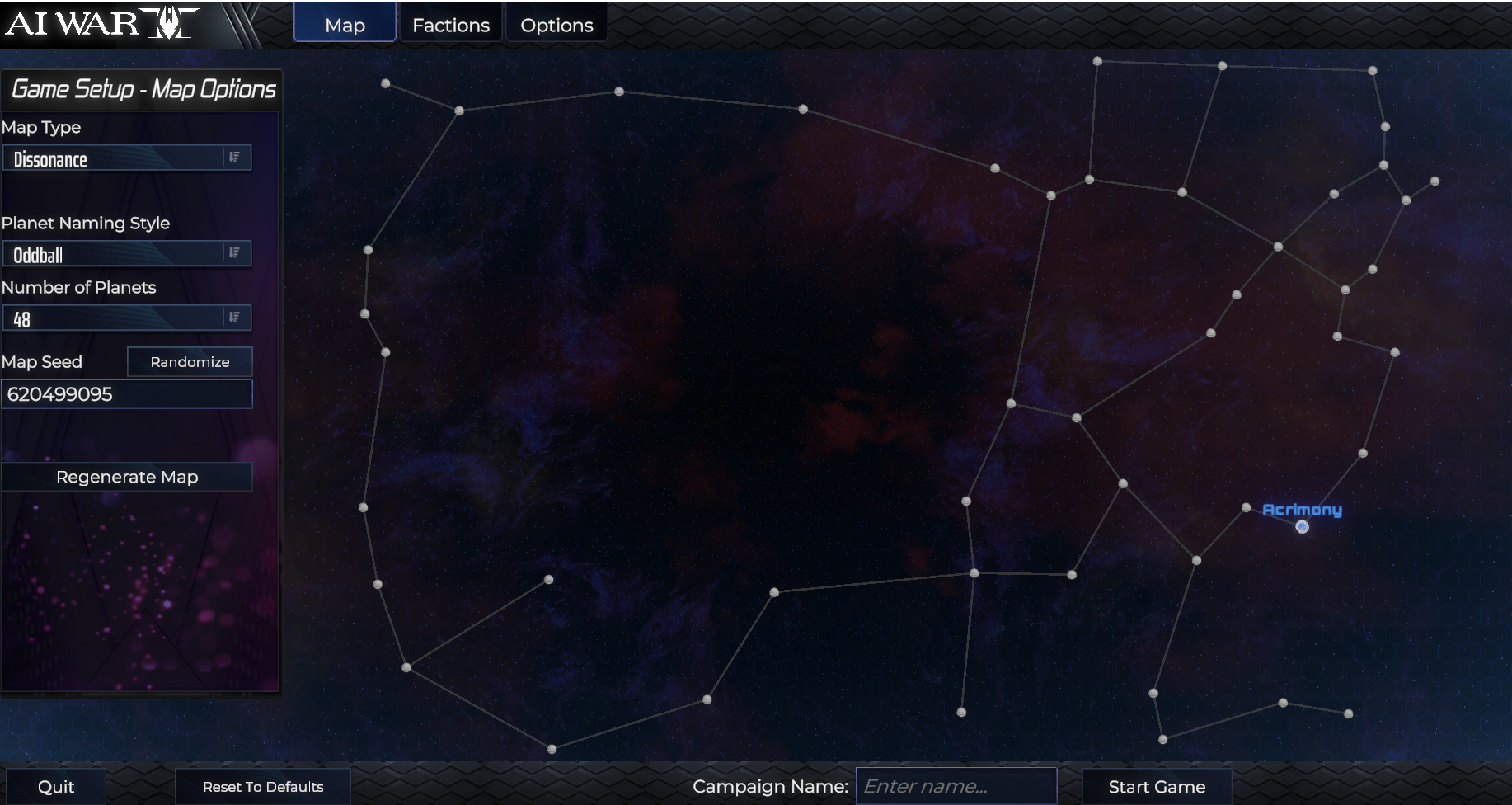 Our first non-kickstarter-related expansion comes out in early 2021.  Maybe January, or potentially February.  You can read all about it, at least in a limited preview format.  We’ve had a number of testers banging on this for months now, and the detailed unit design and art to go with it are the last pieces we’ll be putting together.

This expansion represents a large opportunity for us, since it will coincide with the game fully launching its multiplayer mode.  A lot of news outlets didn’t fully cover the original launch of AI War 2 because we released it in a crowded season and it came out with too little advance notice.  So we’re trying to turn that around with this expansion and hopefully get some more traction with a wider audience for the base game itself.

Our second piece of DLC for 2021 will hopefully come out more around the middle of the year, and you can read about that here.  It’s something that came into existence largely because Badger kept adding too many things to DLC2.  DLC2 was either going to be massively expensive, or any other DLC we ever did was going to look paltry and small by comparison.

We made the sensible decision to split these out into two products that we can thus offer at better prices — and also take extra time to do cool extra things for DLC3.  I’m looking forward to getting to fully design my first faction, versus just collaborating on factions with others or doing the art and technical support for them. 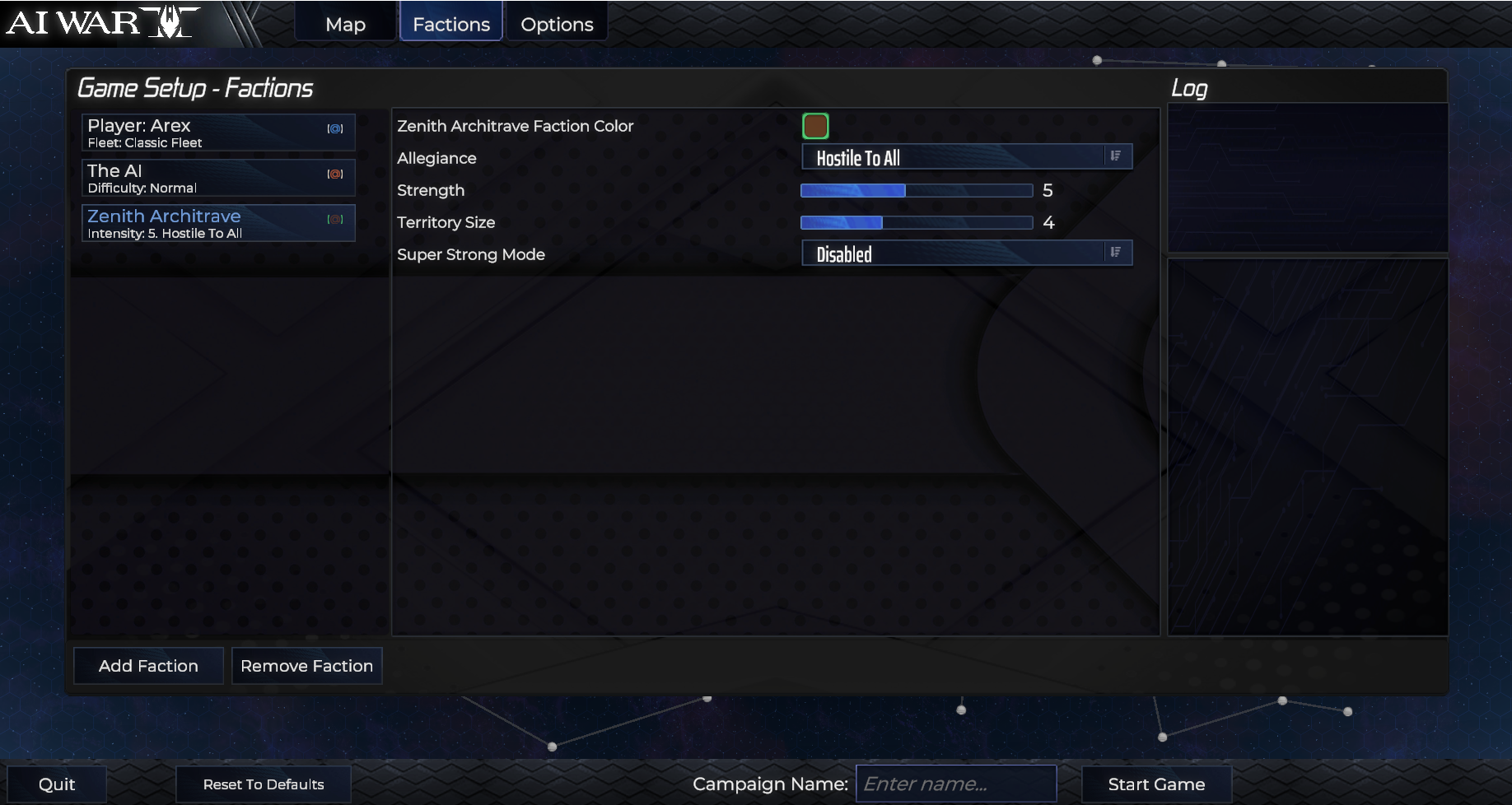 There’s a diminishing number of things.  I covered a lot of it back in update #65.  Interplanetary Weapons are something still coming for free to the base game (they were a stretch goal), and I’ll be working on those while I work on DLC3.  The backer planet naming will happen around the same time, as well as the ability to send some taunts back from the player at the AI.

We’ll probably do another batch of AI taunts as well, and the Cyber Cipher reward for mysterious messages will be something that we tackle during that DLC3 period.  Design and Name an AI is something that will be around the same time as the third DLC3, same as the Text-Based or Design-based Mercenary Stuff.  There are two lingering art-related backer rewards I still need to follow up on, but then that’s it.

What Happens After That?

The release of this game started out going well, and I think that the reviews that folks have been leaving for the game were a big help for folks passing by at the start.  2020 has been a rough year, though, when we really look at the data.  The company’s income has fallen to less than half of what it was in 2019, and that was already one of our lower years in terms of income.

We do have those two new DLC planned for 2021, along with the giant multiplayer updates and so on that are free, so hopefully that trend will turn around.  If you’ve been playing the game and enjoying  it, we’d greatly appreciate it if you’d drop by and leave your own thoughts, too.

If the trend doesn’t turn around?  I don’t know, exactly.  The structure of modern online stores may ultimately wind up forcing our hand.  I’d probably have to either choose between working on an entirely new project unrelated to AI War 2, or start working on a sequel instead of more expansion.  Both prospects have a lot of downsides, but they also have some substantial upsides.

Right now I don’t feel super inclined to leave the AI War franchise after all this work and developing this giant engine, so I’m more inclined to stick to something closer to home than try to reinvent the wheel.  If you look at the evolution of AI War 2 since launch, the current build you’re able to play is already practically AI War 3.  It looks better, plays better, has better AI, has more content, and is much more technically advanced.

Right now the frustration is that more or less we’re doing most of that work for free (personally I have still lost about $240k in making AI War 2, versus earning any actual money, if you look at my spent money versus earned), and it’s hard to get press attention for a “year old game.”  Since we started this project, more than half a console generation has come and gone, sheesh!  I have no shortage of ideas, but I don’t want to work for someone else and right now the open market is feeling fairly indifferent. 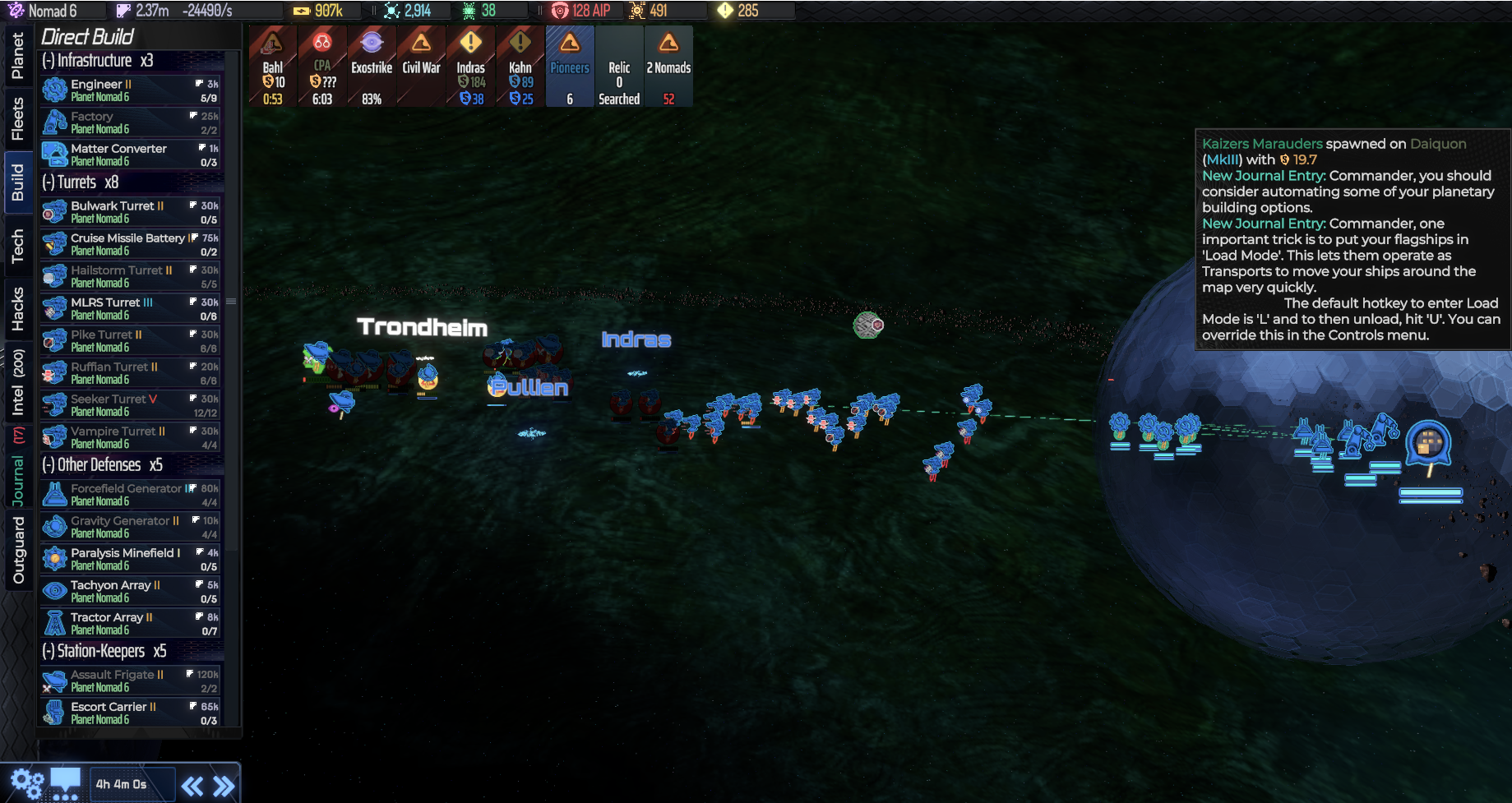 Please Do Report Any Issues!

If you run into any bugs, we’d definitely like to hear about those.

Problem With The Latest Build?

If you right-click the game in Steam and choose properties, then go to the Betas tab of the window that pops up, you’ll see a variety of options.  You can always choose most_recent_stable from that build to get what is essentially one-build-back.  Or two builds back if the last build had a known problem, etc.  Essentially it’s a way to keep yourself off the very bleeding edge of updates, if you so desire.

Also: Would you mind leaving a Steam review for some/any of our games?  It doesn’t have to super detailed, but if you like a game we made and want more people to find it, that’s how you make it happen.  Reviews make a material difference, and like most indies, we could really use the support.