Arcen (pronounced with a hard c, like “ken”) was founded in 2009 by Chris McElligott Park. A lot of really talented folks have worked with him over the years in both fulltime and part-time capacities, but the company has always been relatively small.

If you’d like a really comprehensive history of what our history has been and how it has played out, we have a full company history for you.  It is stupidly detailed, clocking in at novella-length, but is still just the abridged version.  The same questions kept coming up in interviews and AMAs and so on.  Now it’s all in one place.

So what’s this company about, in the TLDR sense? Giving players opportunities to feel clever.  There’s been more strategy games by us than any other genre, but we really don’t consider ourselves a strategy game developer. Chris loves most genres of game.

As of early 2022, we’re working on wrapping up the last of the work for AI War 2, and then preparing for some dramatic expansion of our staff to work on a project that will be announced later.  As we spin up the larger staff, we’ll have bios and information on them as well.

Most of our games are set in a large internally-consistent “Arcenverse.”  It’s a really rich sci-fi landscape that spans a few trillion years of history and future, and which has ties between most of our games.   All of our hard sci fi games are in one large shared multiverse (you can think of it as mostly being a single universe, but your own choices in any given game are part of what perpetuate the multiverse, since any way you play is considered canonical).  If you want to know about it all in insane detail, of course we have that for you.

If you’re wondering about the awesome music in our games, that is always the incomparable Pablo Vega.  He’s been here since literally the first month the company existed.  His incredibly talented wife Hunter Vega is often heard on vocals, and other times his smooth tenor is what you hear.  The two of them in duet is always something to behold.

His last name changed in 2020.  He was born Christopher Michael Park, and went by Chris Park or Christopher M. Park.  He went through a rough divorce in 2018 after an 18 year relationship.  After floundering around for a while, he met and later married the brilliant Dr. Kara McElligott.

He thought it was kind of old-fashioned for just the woman to change her name, and besides which they both had large bodies of work referencing their “maiden” names.  She had already decided to change her name to McElligott Park, and he decided he would do the same. 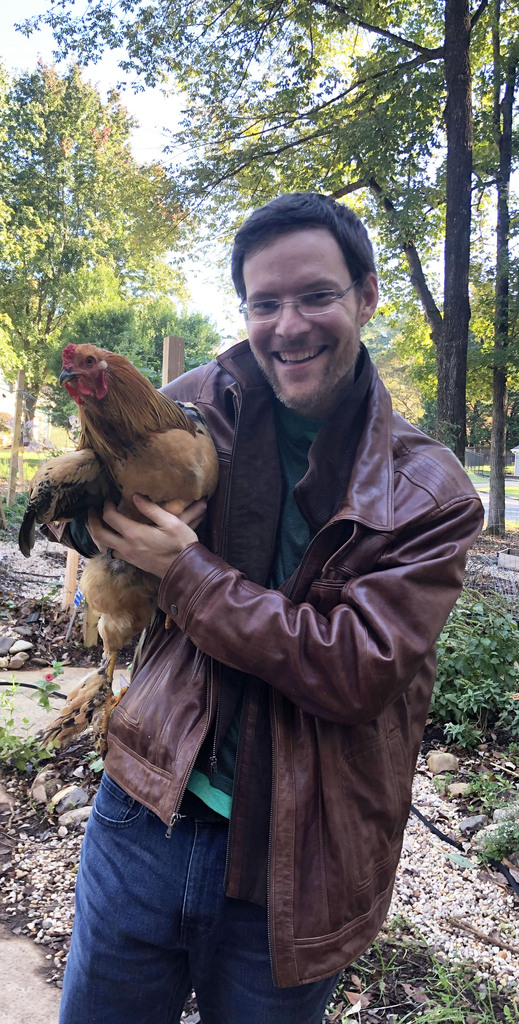 Yep, I love chickens.  Right now I have ten.

They are the dinosaurs I always wanted.