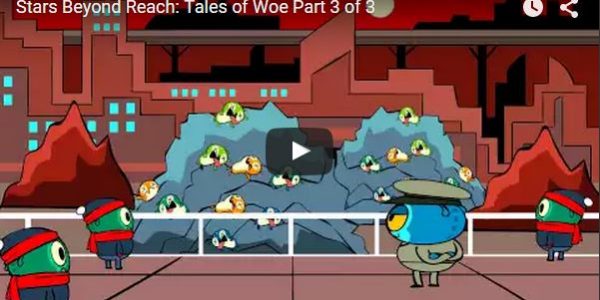 First up the good news.  You may recall that we were doing  a series of visual shorts set in the world of Stars Beyond Reach.  Well, the final part of that is now here!

Since it’s been a while, here are all three parts of the video in one series:

Part 3 has been done since May (as you’ll note by the youtube upload date), but I’ve had it unlisted until now because I wanted to release that along with another gameplay video.  No such luck.  More on that in a bit.

More details on that are here, along with a Q&A with a lot of the people who have been in the beta or were hoping to get in the beta (and still can next year!).

The short of it is this: this game is freaking huge, and it’s extremely novel.  That costs a lot in time, money, and also creative energy.  We’ve been running ourselves ragged over the last few months, and we came to a decision as a team to put the game temporarily on hold.  We don’t have confidence that we could release this in 2015 in a state that we’d be proud of, and even if we did it would likely get smashed by the impressive roster of competing strategy titles that fill the remainder of this year.

Meanwhile, there’s another project that is much smaller and that I’ve been getting increasingly excited about as I designed it on the side over the last half year or so.  Given that we could use a creative hiatus from SBR, and we need to do something with our time, this is the perfect fit.

I know that this sort of delay can be disappointing or even alarming, but really this is what you want developers to do.  Rather than just cut our losses and shove something out the door that doesn’t live up to its potential, we’re going to be a bit smarter about this.

Of course, we’re only able to do this because we’re self-funding: I don’t think a publisher would go for this, and I know that if we’d kickstarted the game people would be screaming bloody murder.  In a lot of respects I wouldn’t blame them, even though this is what’s sometimes just best for a game.   It’s one strong argument against kickstarters, in my opinion, because it puts you in a catch 22 situation where there is no right answer.

We’re looking to release the upcoming interim game — a realtime roguelike with persistence — in January.  This seems very feasible at the moment, and certainly a lot lower-risk than putting all our eggs in the SBR basket for that same timeframe.  That causes an unfortunate delay in SBR, but I believe the final version of SBR will be a lot stronger for it.

Most likely we will start a non-Steam Early-Access-style alpha for the interim game in November of this year.  We have a huge amount of the code and design for the game already done, as it is partly using something that we developed during the dev cycle for The Last Federation — but had to set aside because it didn’t fit with the rest of that particular game.

Why not Early Access on Steam?  Well, you only get one release on Steam, and if we tried to do a release in this time period we feel like we’d just get lost in the shuffle.  Much better to just do a more limited release through our own site and maybe a few other partners, then have our big launch with Steam and yet other partners at 1.0 in January.

If you’re wondering, this interim game is the one that we’ve been talking about since 2014 that was originally called Airship Eternal, then Life At The End Of The Universe, and now is who knows what.  It was originally more of a SHMUP with survival elements, but I’ve been playing more roguelikes lately and found that they better scratched the particular itch I was trying to get at.

Something Else In November!

We also have something else planned for November, although I’m not quite ready to say what it is yet.