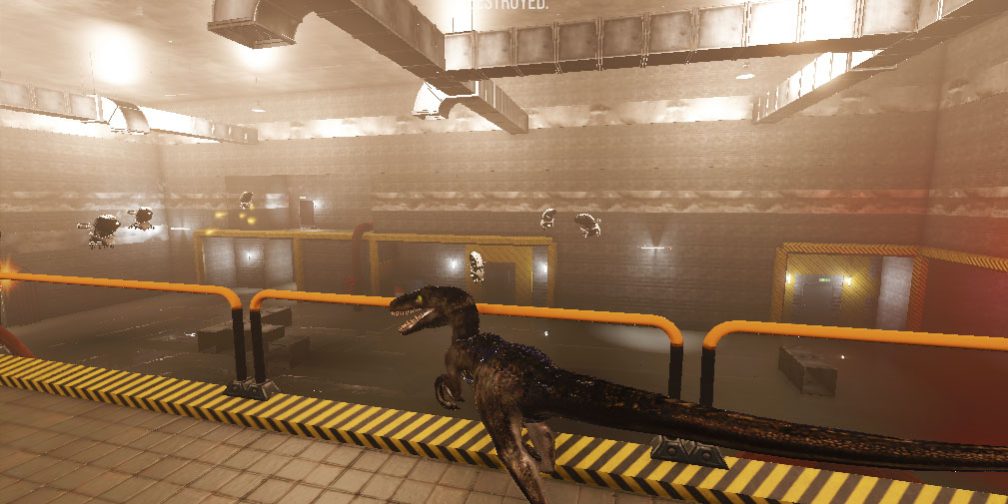 Release Raptor Pre-EA Demo 13 is now out for testers!  Demo 12 came out earlier today, so we’ve been busy.

Tomorrow is our release into Early Access, and while we haven’t been able to do everything I had hoped by this point, we have done a lot of things that I hadn’t expected to get to, so I guess it balances out.  I’m really proud of the current state of the game, and it’s going to grow rapidly over the next days — not to mention weeks.

The performance of the procedurally generated levels is just on a whole other level compared to even earlier today, and I’m very excited about that.  Visually I think it looks better, too, and that’s only going to get better as I get more IES-based light cookies in there.  Right now there are still some cases where we can get some ugly light bleed through walls thanks to changes made today, but that’s relatively minor and something that we’ll fix as we find them.  I think all the most obvious cases have already been found, but we shall see.

In other news, I thought I’d share a series of screenshots from one of my test runs today.  Note that I wasn’t exactly playing strategically, I was more having a fun rampage, heh — so I took a looot of hits.

I didn’t take a screenshot from very early in my run, when I was at the airdrop site in the alley.  However, this was the first hall in the first building I went into: 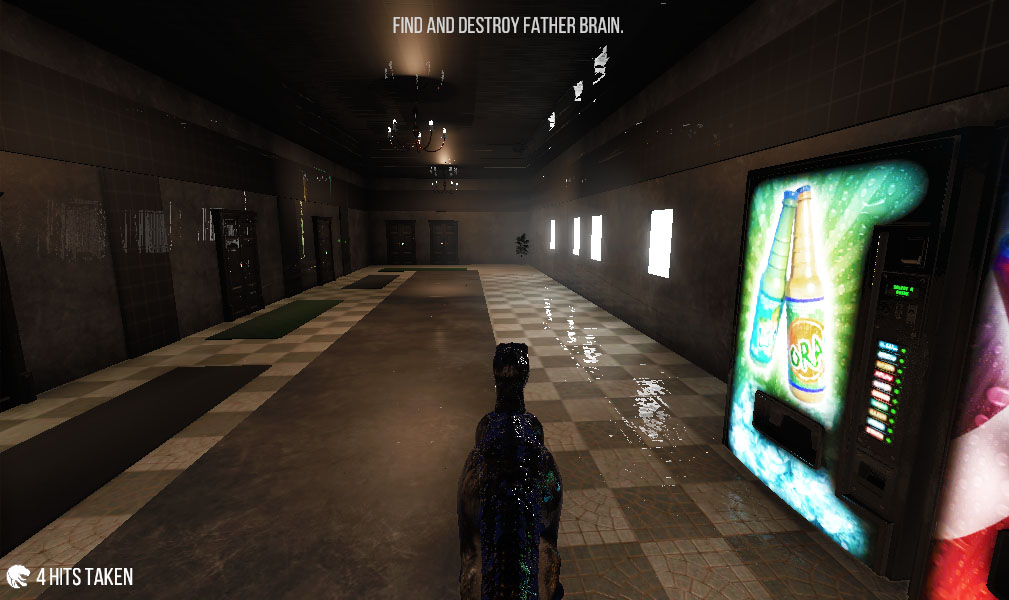 I continued around for a while and explored a few apartments, then went out into an alley between this building and the next.  Cicadabots were… everywhere. RUN, FOOL! 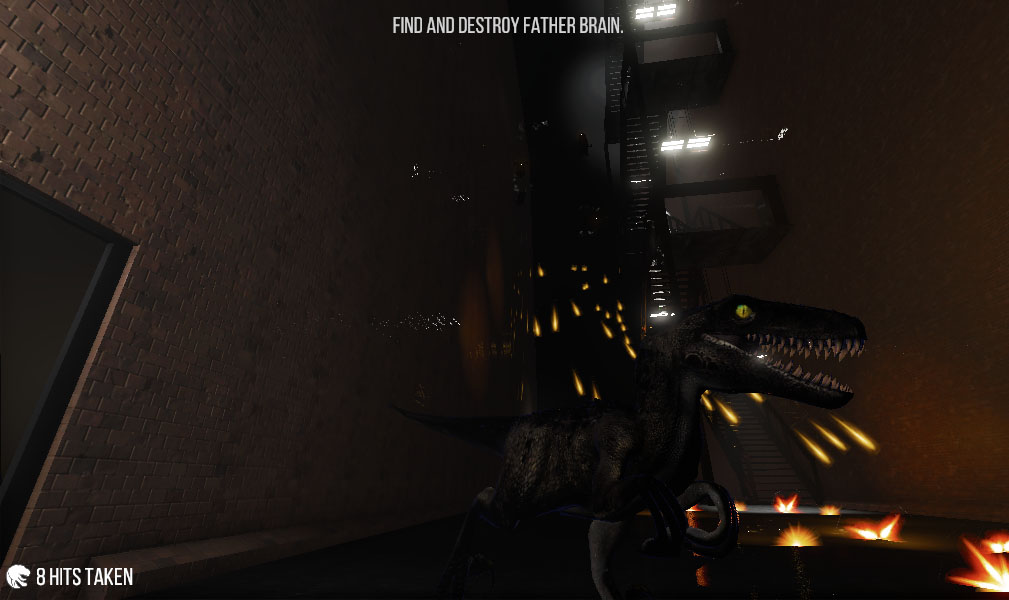 I leapt up one fire escape and then wound my way up the other one using it as cover from their scouring attacks.  I didn’t bother destroying them much, because they don’t shield Father Brain by being alerted.  I think I did stop to leap off the fire escape and kill a couple of easy targets in them just because, though. 😉

In the next building I broke a lot of stuff and just kind of took out some aggression on a pair of apartments.  There was a hole in the floor of one leading down into another, and what you see below is a lot of the wreckage left from my passage.  Well, a little of it. 😉 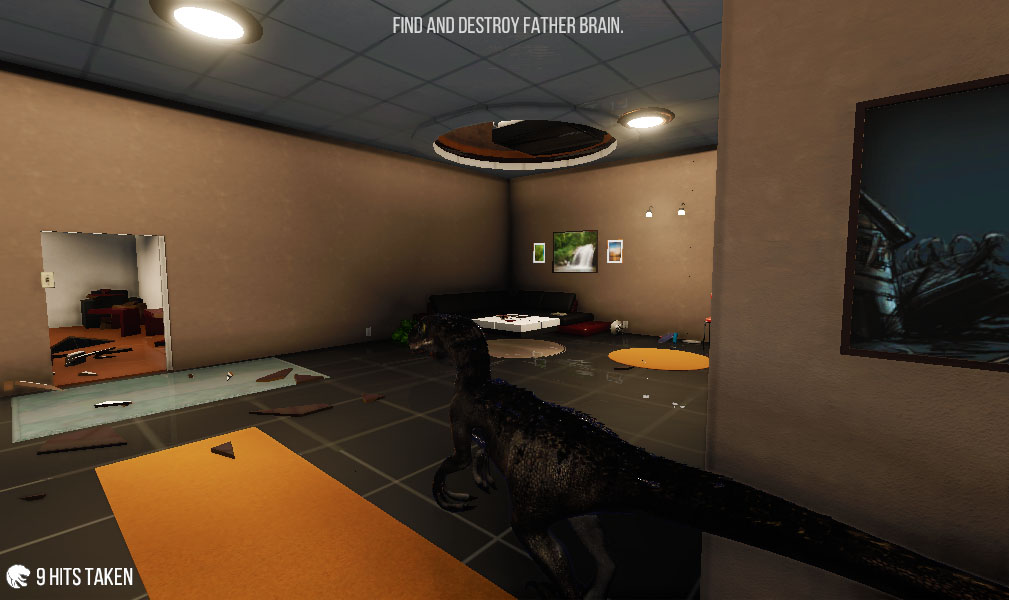 Next up was another building on, getting into an industrial section next to these two apartment buildings.  This giant room is meant to be a miniboss room, but we don’t have any minibosses yet (sheepish grin).  I was hoping to get one in today, but didn’t have time because of all the other stuff that you see in those two release note lists.

THAT said, holy smokes the Cicadabots made it so that no miniboss was needed.  That was unexpectedly intense (there were more than you can see in this one shot). 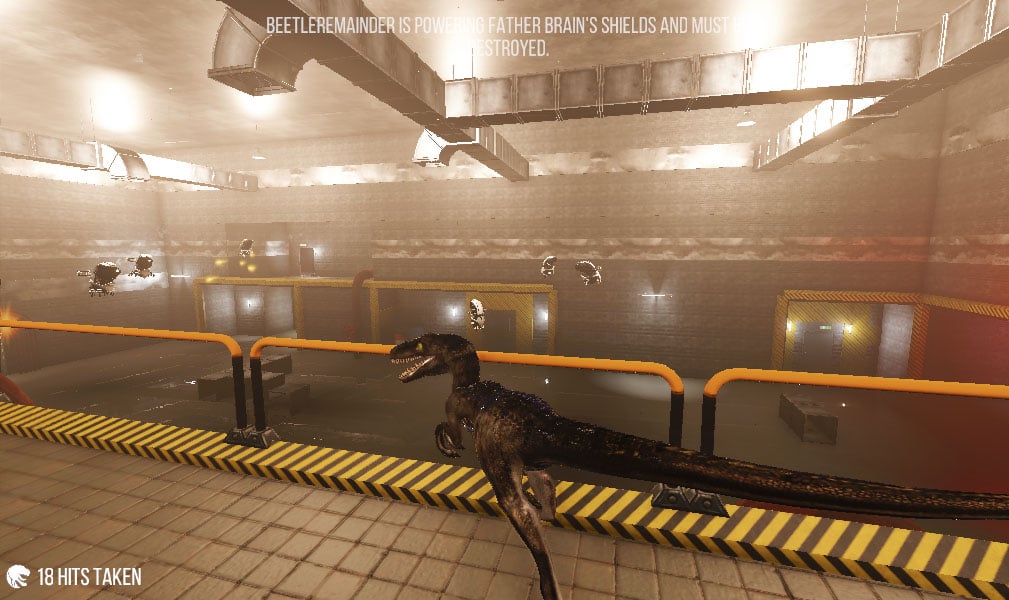 Unlike a regular miniboss, I didn’t have to actually fight these (well, if I didn’t sneak past the miniboss).   But I chose to, just for fun (or spite?). 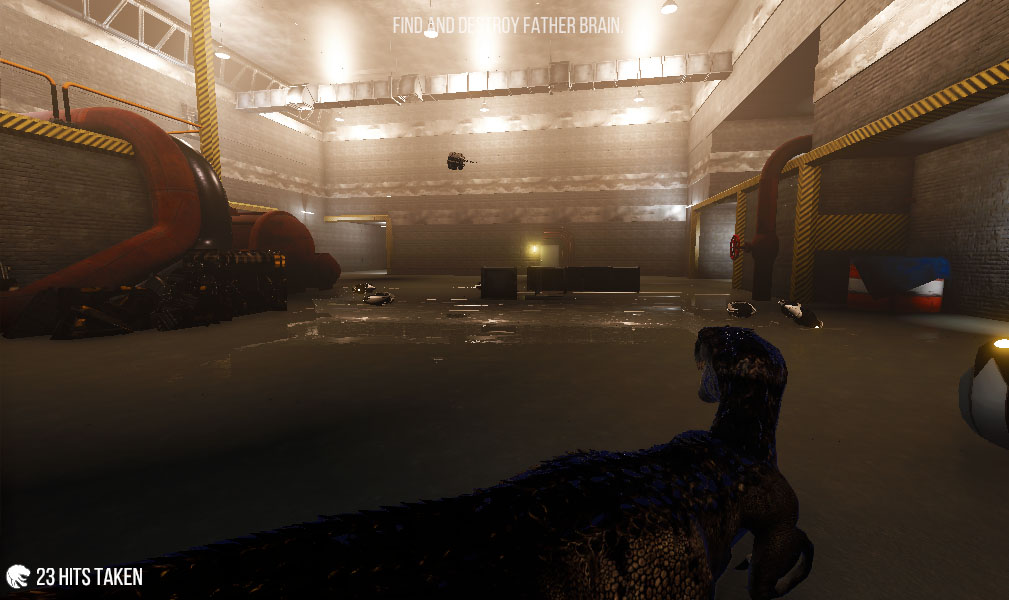 I can’t express how badass I felt at the moment there looking around the room.  I felt like a raptor had wandered into Portal and just wrecked everything.

I went through a few more industrial areas (no sewers in this particular run, it turned out), and then came into the lab at the end of the level.  I was careless coming into the atrium of it, and a couple of Cicadabots jumped me. 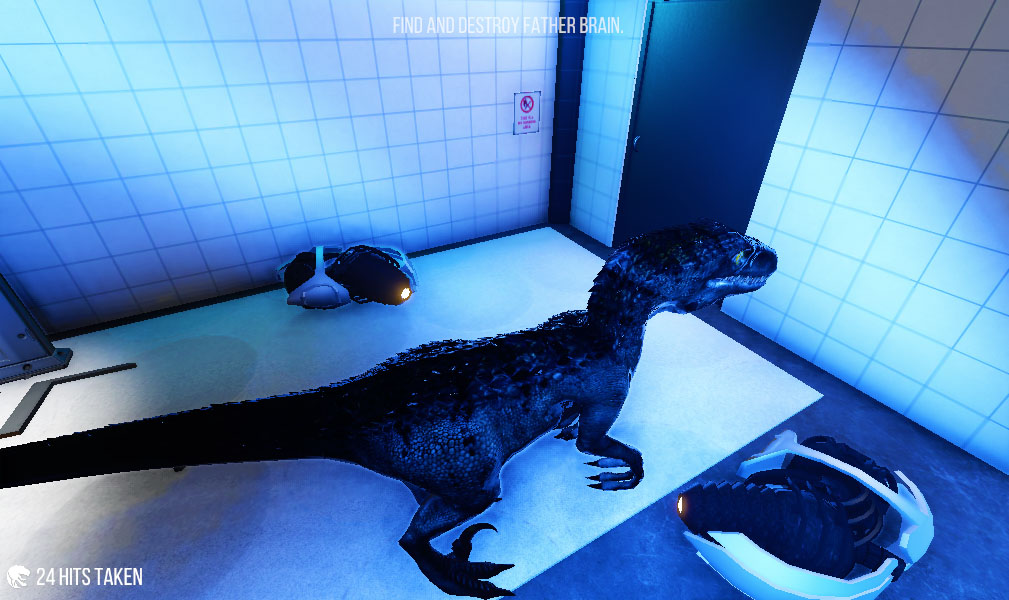 I only took one hit, though!  I freaked myself out a little bit, though, because after killing them their bodies were still there and kind of propped up, and I was paranoid that they were still alive.  So I jumped on one and it kind of rolled around lifelessly, and I couldn’t help but giggle a bit. 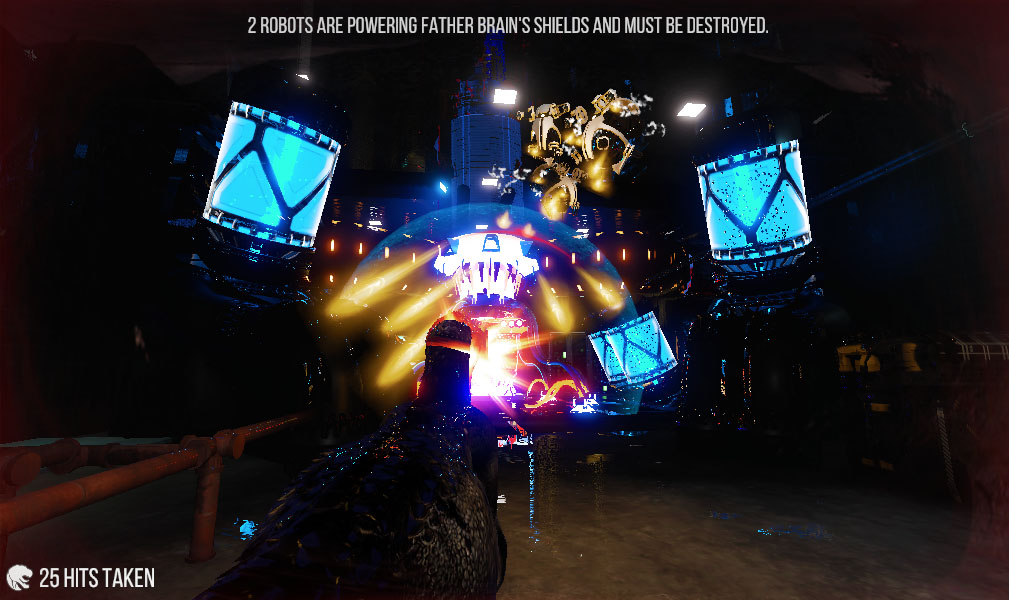 This is what Father Brain looks like when his shields are up.  And I’m about to get blasted in the face trying to take a screenshot of it, naturally.  There were turrets and yet more Cicadabots all up in here; fortunately no Beetleclefts hiding in the corner, though (or as Misery termed them, “those abominable green things.”)

The shield is a really fun thing, because you can actually use it as a defense for yourself, too, heh.  You can run up and down the big dome of it, and it blocks enemy shots.  So you can hide on one side of the bubble, then pop over and get the enemies, etc.  Father Brain taunts you mercilessly if you mess with his bubble too much, but still. 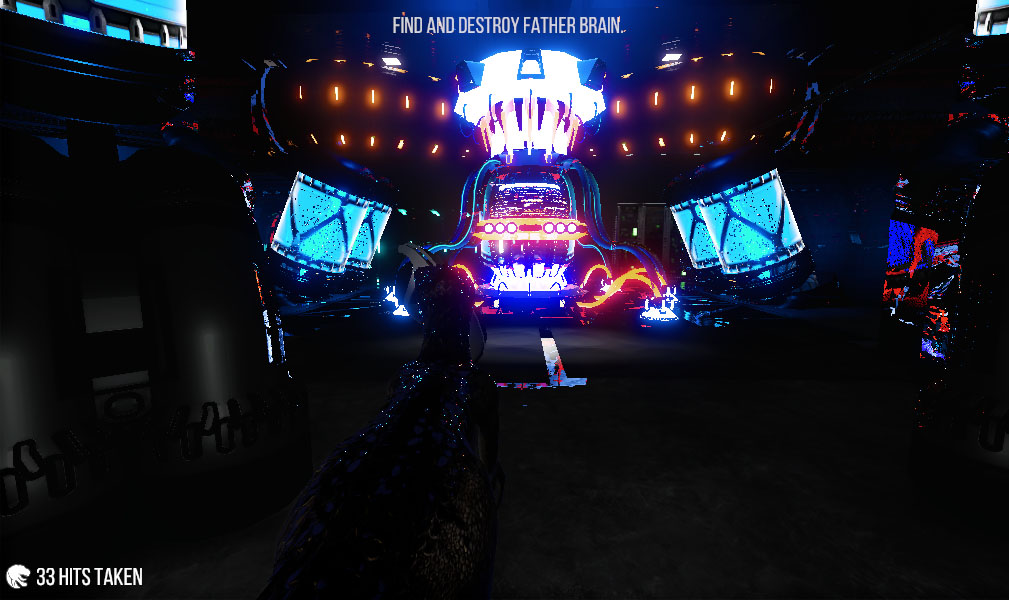 Yeah, so I got shot a LOT there.  It was my own stupid fault, mostly from doing screenshots and not playing smart in general.  I should have used the bubble more to my advantage.  But now everyone else is dead except Father Brain and myself, and he’s utterly defenseless.

If you take it more slowly and everything isn’t fire and death, then you can hear him call for help, beg, and try and trick you into leaving.  I wrote those lines, but I remember when Ben and I were recording them I hit a point where we were both laughing with it and going “man that’s DARK.”

Actually the poor shield generator (not yet in the game) is way darker, but hey.  When Craig was working on some of the audio for the shield generator, he said “is there a way I can not kill that guy and just have him be my buddy or something?”  He won’t be your buddy, but if you can avoid him and the things he’s shielding, then you can at least spare him.  (He never ASKED to be a shield generator.  He’s on your side!  Etc.  Those aren’t the dark ones, obviously.) 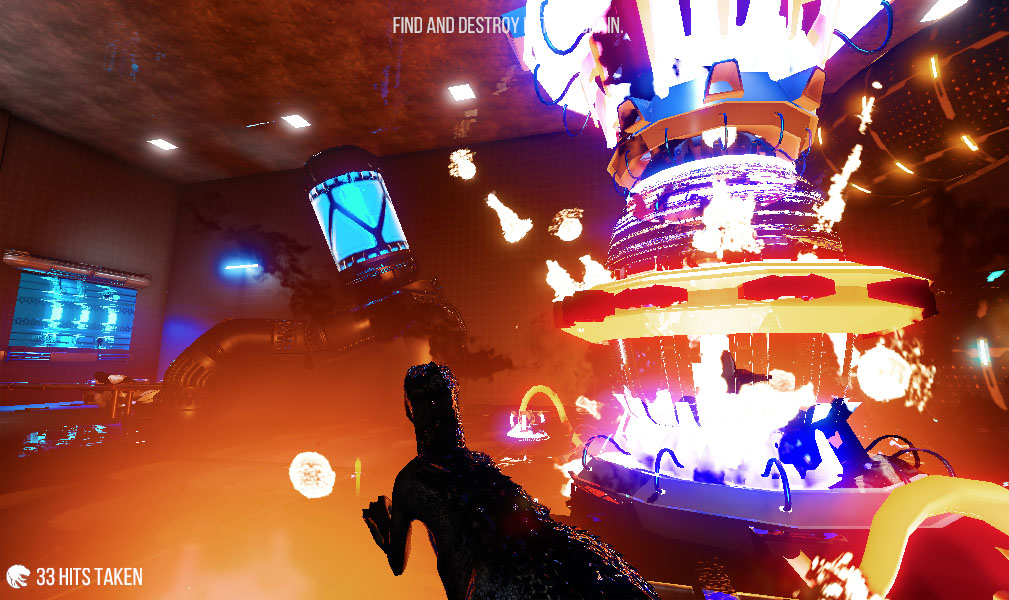 Needless to say, this particular time I went for the kill with speed and couldn’t even hear what Father Brain manged to get out before he went permanently offline.  Another area secure! 😀

And with that I’m going to close it out for the night, given that it’s 2:30am.

Tomorrow morning I’m going to have to focus on getting a new trailer up as soon as possible, but Cinth is helping with taking new screenshots for the store, which I really appreciate.  I want to get the minimap in there if at all possible after that, and then whatever other bugs pop up overnight, if they are blocking.

And then, aside from whatever new reports, it’s on to more good stuff — more enemies and locales and so on!  I’ve enjoyed this polish pass, but we’ve had a lot of such passes (as the release notes show), and getting to focus on content more will be a nice change of pace.  Fortunately Blue has been cranking out the locations to play in.  She has this cool new rooftop scene that hopefully will be fully ready tomorrow; it’s almost there as it is.