Major updates to the Arcen Store, plus discounts on Skyward and Shattered! 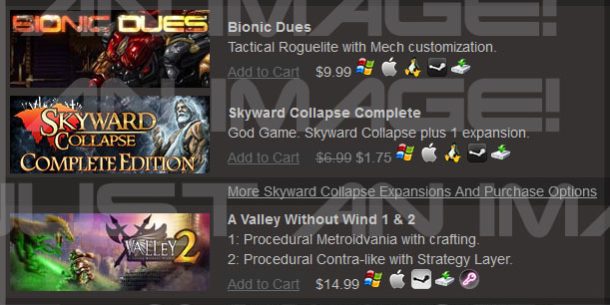 Skyward Collapse and Shattered Haven have both gotten official linux support this week, but that’s not all that’s been going on.

The Arcen Store has had a visual and functional overhaul and now both looks better and works better.  There are a number of things that are easier for me on the back-end, but more importantly for you it’s easier to manage your cart and see what you’re doing, etc.  Cart management has been extremely refined with usability in mind (the old system was pretty frustrating, actually).  The store itself (FastSpring) is also now branded the same as our new website, so you don’t have to do a double-take of “where did I just go?” when you click Add To Cart or similar.  It’s all a lot more seamless now.

In celebration of the new linux versions of Skyward Collapse and Shattered Haven, both of those games (plus the expansion and complete edition for Skyward) are on sale for 75% off until July 20th.  These both come with DRM-free builds as well as Steam keys.  Note that we are working on linux builds for our other non-linux games, so I’ll go ahead and give you a heads up to expect discounts on those at the time of those linux launches.  In this particular instance, only fair to warn you ahead of time. 😉

Now in addition to credit cards and Paypal, you can also now pay with Amazon Payments.  Depending on your location, you can also pay with WebMoney, Giropay, iDEAL, and Sofort.  I know that some of our international customers aren’t able to use credit cards or Paypal for various reasons, so now there are actual valid purchase options for you!

The Last Federation is now part of our store for the first time.  You can still purchase it from the Humble Widget just like before (and we actually get a slightly better cut if you do!), but having it also be in our direct store gives us some added flexibility as well as giving you access to the other payment options noted above (rather than just Paypal and Amazon Payments).  Depending on your location, this may mean that The Last Federation is available to you for the first time — I had someone from Iran email me just a week or so ago about this, which I greatly appreciated having brought to my attention.

The Skyward Collapse Complete Edition, as recently mentioned, is now available in the store.

Steam Keys For All Games!

Every game and expansion on our store now lets you either register a CD key on Steam, or gives you a steam key directly.  Previously the following games did not give you any sort of Steam-registration option through our store:

AI War: Vengeance of the Machine

Now all of them include Steam keys along with the DRM-free builds that they already gave you.

First, an image for you: 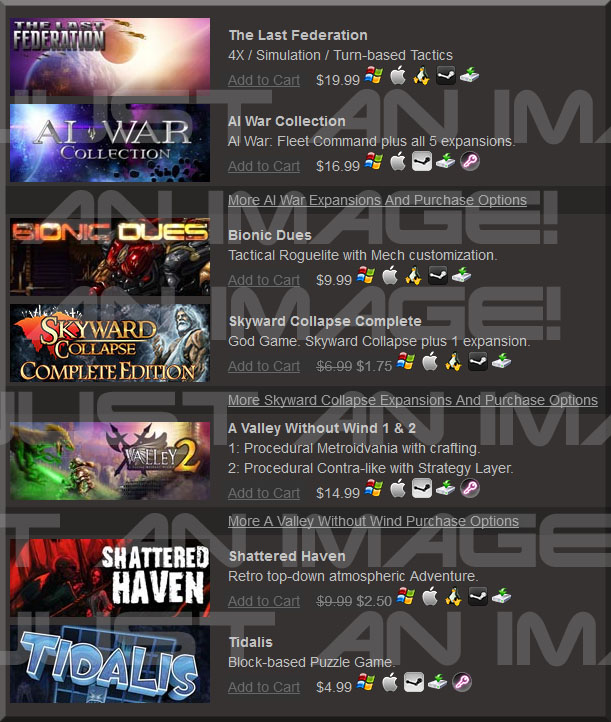 The above is just an image, if the watermarks all over it aren’t invasive enough. 😉

In that image, however, you can see the new legend next to each game that shows its current status in terms of what is supported.  You can hover over each icon to find out specifically what it means (in the actual store, not the image above), but most of it is pretty obvious.  This is a lot better than our old system, because now right inline with the particular store item you can find out what platforms are supported, if it has a Steam Key or else a CD key that is registrable on Steam, etc.

There will also later be little green keys that mean that it gives you a CD key which allows you to do things like register on steam and/or unlock the demo into the full version, but that for the downloadable version it gives you the CD key is not actually required.  There aren’t yet any of those in the store, but I’m working on converting some of the games that are currently purple-key status into green-key status.

Note that the downloadable icon to me really means that you’re getting a DRM-free version of the game, but some people chafe at the mention of a CD key (there are no online checks!), so for the sake of semantics I’m just noting it as being a downloadable thing.

Bionic Dues, The Last Federation, Shattered Haven, Skyward Collapse, and Nihon no Mura all have new builds online for the downloadable version on our store.  In each case it’s the latest version, and it includes the Windows, OSX, and Linux versions all in one simple zip file.  We’ve stopped using installers, because those are both slow and platform-specific, whereas the zip files are smaller, blazing fast, and can be used anywhere.  99% of the files for each game are platform-agnostic, so if you want the game on multiple platforms there is no reason for us to make you download those files 2 or 3 times.  This way you get it all in one go.

Another benefit of having no installer is it makes it clear just how darn portable these games are.  You can throw them on a thumb drive and play them from there, if you want.  They don’t mess with your registry or store files outside of their own folder, or anything like that.  Makes it very easy to hang on to them.

What About Updates For The Last Federation And It’s Upcoming Expansion?

I noted this recently in an update to the announcement post for The Last Federation: Betrayed Hope, but basically I decided to take a break from that for a couple of weeks to get all these linux builds, store stuff, website stuff, and whatnot fixed up.  Then I’ll be back to my regular work on TLF, I promise!  There have been a lot of people wanting linux builds from us for years, and now that I have a relatively quiet period I felt like I owed it to them to finally make good on the promise of those builds.

Plus the website and store has been something I’ve been really feeling like needed to be improved since as far back as 2012, but I just never had the time to stop for a breath.  It’s one of those things that if you just keep putting it off, it never ever gets done.  So I’m taking a few weeks to “clear my decks” of all that sort of backlog clutter, and then I can focus on TLF and Spectral Empire without any distractions.  Thanks for your patience on that!