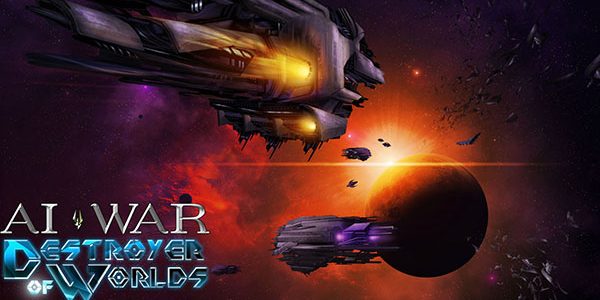 AI War’s run from 7.0 to 8.0 took a long break during our development of The Last Federation, but still contained over 60 new releases in 425 days. Thanks to player feedback (some new, some from years ago) the game is now better than ever.

Biggest on the radar is the addition of the new “hacking” mechanic which gives the player several abilities which can be extremely useful but also quite risky. Hack wisely, and you can turn defeat into victory. Hack foolishly, and you can turn humanity into hamburger. The idea came out of long discussions with players on improving the relationship between metal and crystal. Those two mechanics had become far too similar, and ultimately the idea of merging them in favor a new radically-different mechanic found a lot of support from the community.

“Salvage” is another major new mechanic based on years of community feedback. Basically if you lost your whole fleet in an attack it could take a long time to rebuild but often there wasn’t much actual danger. In a game where 8 hours is a “short” campaign, players don’t want to be stuck spending real “wall-clock” time without much actual “game” happening. So salvage allows the AI to harvest the remains of your ships lost in its territory to build a “reprisal” force that threatens you after a fleet-wipe, and allows you to harvest the remains of AI ships lost in your territory to accelerate your rebuilding. This led to a somewhat bumpy ride balance-wise but it’s shaken out pretty well by now and has significantly improved enjoyment of the game.

Champions have also been the subject of quite a bit of player feedback since they were introduced in the fourth expansion. Some people really liked them, some people really did not. One of the biggest issues was how the nebula scenarios (the main way you could improve champions) were so disconnected from the rest of the game. So we’ve added an optional alternate way to improve your Champion units that’s much more aligned with playing normally. There’s probably more to be done on this topic, but what’s been done thus far has helped.

“If anyone beats difficulty 10, that’s a bug” is one of our old jokes with the community. Actually, we laugh when we say it but we’re not joking. Several players have managed to beat Diff 10 over the years and the refinements to prevent this (without being too heavy-handed) have continued. Several AI improvements were made for 8.0, especially it’s pushing an advantage during a large-scale attack. Balance dials have also been cranked to even-more-painful levels, and as of this writing there are no confirmed reports of a “normal” diff 10 win since the last round of related changes. The gauntlet’s right there on the ground, folks.

Player feedback (and our own devious minds) prompted tons of other changes in 8.0 (counter-attack posts being made optional comes to mind, and many turret caps becoming per-planet), but this account has to stop somewhere. Oh, and let’s not forget the engine upgrade and the addition of linux support 🙂

Have fun!  (Here’s the discussion on the official forums, by the way.)