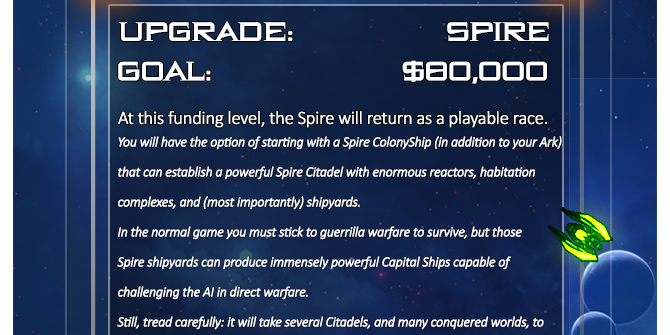 Um… wow?  Folks are absolutely amazing in their support, and I’m just agog at this.  I’m going to be out most of the weekend, but I just wanted to say thanks in advance if we hit any stretch goals before Monday.  At the moment we seem likely to hit the stretch goal for new music sooner than later.

So just what is this “AI War” thing, and why should you be excited about it?

Hopefully the kickstarter campaign page answers that question, in a general sense at least. 😉  But prior to launching this campaign I was working on this video, and I finally finished editing it today (with Pablo’s help cleaning up some unfortunately peaky audio because my mic gain was off), so I thought I’d share it.

If you’re wanting to explain to someone first what this game is, then why it’s frickin awesome, maybe this video will help.  Or maybe I’m just longwinded — 9 minutes is pretty concise for a game like this, though. 🙂

The above image is showing off a small fleet of some sort of capital ships that I designed the other day.  What are these things?  I have no idea — I just had fun making them. 😉

Tangent With Art/Tech Geeking Out

Fair warning that these aren’t yet optimized in terms of their polygon counts, but that shouldn’t make a big difference in visual quality.  Most of what looks like intensive detail on these is actually normal maps — aka non-polygonal bits that catch the light and make it look a lot more detailed than they actually are.

Parallax maps and tessellation can do that sort of thing in the latest versions of OpenGL and in DirectX 11 and onwards, but this is running in DirectX9 (and can run in the equivalent versions of OpenGL identically).  This is using a “rim lighting” shader that I wrote, plus these normal maps, plus some other funky stuff, to give the appearance of far more complexity than is really there.

Best bits?  It’s very inexpensive on the GPU, it’s easy on the GPU pipeline, it’s super compatible with even old systems (no DX11 needed!), it supports dynamic batching in Unity (once Cinth or I get in there and reduce the underlying polygons, which won’t change the visual look much), and it also has a diminishing cost on your GPU the further away from the screen the ship is.

So a distant ship you can’t tell is lacking that detail, because it’s too far away for you to see anyhow.  It’s using a lower mipmap version of the texture.  Much more efficient even than LODs (level of detail groups), which we will also be using.

The other ships that I’ve been showing off, like the fighters and bombers, have had their poly counts already reduced, although they’re simpler in general since it is intended that there be more of them compared to capital ships like these, which are (comparably) more rare.

For the very biggest capital ships and golems and whatnot, we’ll throw batching to the wind and use higher-polycount hand-painted models with full LODs on them as their main efficiency booster.  The overall art style will still remain quite cohesive, though.  It’s natural that you can see more detail on larger things, after all.

So… right!  We’re funded. 🙂  Now we’re working on the first stretch goal off our list:

Next week I expect to release a video actually showing combat, and some other cool visual effects, and we’ll show you more of the GUI, and Pablo has a video for you, and Keith has some written updates…

Busy times, in the best sense. 🙂

I’m personally not going to be around much this weekend because I’m both trying to have a better work/life balance in general and also we’re celebrating my mom’s birthday, but I’ll be back in force on Monday.  I’ll peek in some over the weekend, of course, and I imagine Keith will be around some Saturday off and on.  But just so you don’t wonder where we are if we’re quieter than usual.

Thanks again for all your support!