A Guide To Aliens In The Last Federation 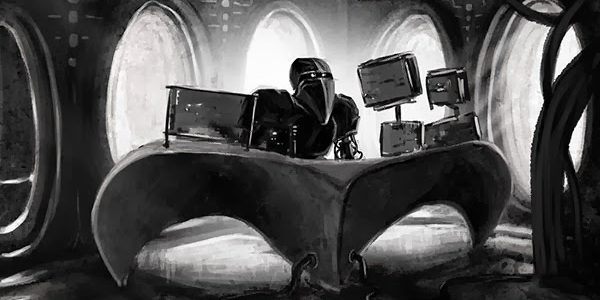 The Last Federation is filled with 8 (well, really 9, but one of them only has one remaining survivor: you) alien races.  How each one acts in each game depends greatly on their circumstances and what sorts of alliances and events form.

Background On The Races
Even the nicest of races can become warlike if their planet is filled with crime or they are bent on revenge for a war of aggression from another race.  Even the most horried, aggressive of races can be your best ally if you get them into your federation early.  And for that matter, the most-aggressive races can wind up being meek and passive on a solar-system scale if they are continually consumed by internal strife or are otherwise finding themselves technologically outmatched and outnumbered.

So the thing to remember while reading this guide is that each game will play out very differently, even though the baseline personalities are always the same.  Sometimes the “ewoks” will be the undisputed terror of the galaxy, ruling half of it with a Fear Empire you can barely overcome.  The “klingons” hide in fear of the terrible little furry guys.  Etc.

Honestly this is one of my personal favorite things about the game: the races themselves do not have randomized attributes, but since their situation is so heavily randomized, their reactions to their situation is understandable and internally consistent, so that you get very different situations every time.

Sometimes maybe just everybody gets along and there is no war, but there’s a bunch of politics, commerce, and pirates to deal with.  Sometimes everyone hates each other so much by the end that it’s a challenge to just build a federation with those planets that haven’t been blown to smithereens. 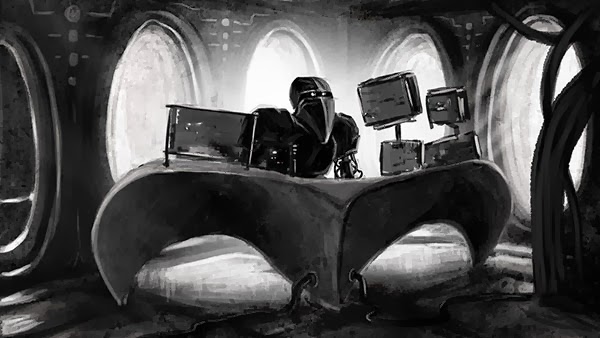 An unfinished sketch of the view for when you are dealing with the Acutians.

So!  Down to business.  Let’s hear about these races, then.

The Acutians
These guys are rather jerks.  Very much industrialized belligerent polluters, kind of a sociopathic robotic race.  In a lot of ways I guess they are kind of like Robo’s “friends” in the 2600 AD time period in Chrono Trigger.  That general vibe, anyway.

The Andors
These guys are more of a utopian robot society.  In a lot of respects they are kind of like C3P0 without the cowardice and with some common sense.

The Boarines
Basically… quadruped snow pig-people that really need their own personal space.  I’m not really sure what to compare them to in other sci-fi.  In a D&D sense they are kind of a True Neutral species, so long as there isn’t overcrowding on their planet.  Then it’s a bit more Chaotic Neutral.

The Burlusts
These guys are basically Klingons… with feathers and chicken feet on their bottom half.  They’re a bit sensitive about it, and their society is a lot less stable than even the Klingons.  These guys are seriously some of the biggest, buffest jerks in the solar system.  Along with the Acutians and the Thoraxians, they are some of the more likely antagonists.

The Evucks
A very scientific kangaroo-like race with these kind of furry jowl tentacles on their face.  They prefer to keep to themselves for the most part, as a group.  If they happen to be on a gas giant and it looks like they are facing takeover, watch out — they’re likely to try to ignite that sucker, glassing a goodly portion of the solar system (including you personally as well, if you’re caught in the blast radius).

They’re also not above unleashing horrible diseases (Teethworms, Black Bubbles, or others) on enemy planets they particular hate.  Left to their own devices they aren’t really mean or aggressive at all, but when someone else pushes them they push back hard.

The Peltian
Basically: fat Ewoks.  Also communist agrarians, as compared to the capitalist industrial Acutians.  These little guys are absolutely pathetic at ground combat, and will absolutely get rolled by anyone who manages to get troops on their planets.  Since they can’t launch useful troops of their own, they instead load themselves into suicidal launch personnel transport pods that explode when they crash into enemy planets.  Why exactly they have to put personnel in these things is a question best not asked.

Their name was never intended to be a pun, but these guys are also aces at orbital bombardment.  Sure they stink on the ground, but in spaceships it’s a bit of a different matter.  When it comes to bombs anyway.

The Thoraxians
A hivemind insect-like race that is kind of a cross between the buggers in Ender’s Game and the aliens in Alien.  If anyone gets into ground combat with these guys, it’s basically all over.  I won’t go into the overused joke about “it’s the only way to be sure,” but, yes, Ripley’s strategy remains a sound one.  Good old ship-to-ship phasers or missiles or whatever are not a bad idea either.

The Skylaxians
The most scientifically advanced of all the races, these are close in some ways to the supposed Area 51 aliens in appearance.  They have a strong sense of honor, and won’t bomb opponents or partake in other questionable activities.  And if someone else does, that will really affect their attitude toward the other race.

These folks really aren’t out for conquest or any other wars most of the time.  But they are so technologically advanced that if they’re on a planet that is particularly suitable for them, they are likely to outstrip everyone else in terms of fleet size and quality pretty fast.  So if they DO get into a war, that can be a Really Bad Thing.

You can always smuggle their technology for yourself and for their enemies, or work to suppress them from getting such high technology in the first place (which may naturally happen even without your involvement), or you can work to become their bestest buds early on in.  Being bestest buds is not always the best thing if that means that suddenly the Thoraxians and the Burlusts are doing something like forming a Solar Axis Pact in response, though.

Bonus: The Chelonians
This is you — you’re the last of the Chelonians, due to events that transpire in the opening story sequence of the game.  The short of it is that your race was the first in the solar system to come up with spacefaring technology, but as a group you were selfish and basically prevented any of the other races from joining you in the stars… for a few centuries.

But not everyone within the Chelonian race agreed with this policy, including yourself.  There was a bunch of civil war, and some other mysterious things, and in the end everyone was dead except you, and your home planet was gone to boot.  Oops.  Meanwhile, you’ve crash-landed your ship onto an alien world (you get to pick which one) with the technology they need to finally reach the stars.

Except, uh, they’re kind of pissed at you for all that historical oppression.  Actually, everybody has some degree of dislike for you at first, and that’s one hurdle you’ll have to overcome.

Who To Ally With?
That all depends!  It’s really going to vary based on the specific game situation you’re running into, which varies heavily time to time.

You might find that, in practice in one solar system, the burlusts are actually the most technologically advanced and the skylaxians are a poor backwater, due to poor starting conditions for the skylaxians and then the burlusts successfully suppressing the development of everyone else.  Maybe you helped the burlusts in that suppression, and their main warlord(s) really love you for it.

Another time, the evucks are spreading diseases left and right, and somebody needs to go take those dudes out… but they’re on a gas giant.  Great.  So either you sacrifice half the solar system (that part which is not already dying from maggot pox, naturally) or you manage to rally the other races and help them all launch a war of aggression that wipes out the evucks before they can achieve ignition.

Sometimes the acutians wind up taking over half the solar system simply through sheer manufacturing power.  If “somebody” doesn’t do anything to help stop them.

Your Role In All This
Unlike other strategy games, you don’t represent a faction here.  You’re not in control of a planet, or a government, or even a fleet of planetary scale.  You’re a nameless mercenary, working (sort of) behind the scenes with a scalpel-like small force and whatever bargaining power you can muster through helping or hindering races through the contracts you take.

A lot of things are going on without your say-so, and if you just sit and do nothing then you’ll find yourself outmatched and some crazy situation will evolve without your control.  We actually love just sitting there in a form of debug mode and running the simulation to see what insane late-game situations evolve completely without the player’s input.  It’s pretty varied to say the least.

That said, your ability to affect things from behind the scenes is quite substantial.  Inciting war, or helping to develop vaccines, or assassinating political leaders, or capturing outposts, or smuggling key technologies or goods for the disadvantaged… oh, you have plenty of power indeed in this solar system.

You are not the face of any government, and it takes a lot of governments a while to catch onto the role you actually play (after which some of them buddy up to you even more, while others start sending assassins your way, and others start seeing political anti-federation demonstrators and insurgents on the rise, etc).  You’re behind the scenes of all of this, as best you can be anyhow, but you have just as much power to wield as any of the planetary governments.  Just in a different way from them, and frankly in a different way from most other strategy games.

Well, this turned out to be a much longer post than I intended!  Enjoy. 🙂