Stars Beyond Reach: What we’re working on, plus spotlight on the Zenith aliens. 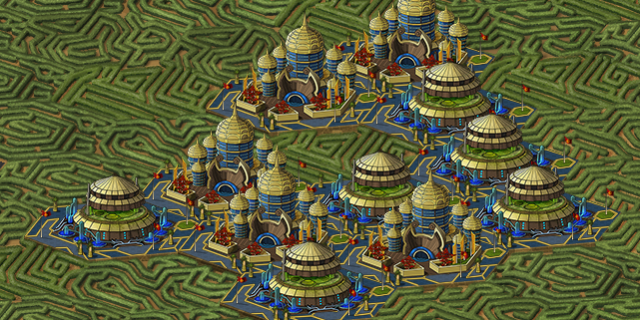 Apologies again for my slowness regarding Stars Beyond Reach updates at the moment.  I’ve been active in the forums since this project answering questions here and there if you haven’t been there.  But carving out the time for organized posts sometimes is a bit tricky.

The last week or so has seen Keith working like crazy on implementing the Market Items that you can create in the game, as well as the resource-usage buildings that provide buffs to adjacent buildings.  He’s now working on actually implementing the first pass of the diplomacy screen that I showed a mockup of last time.

I’ve mostly been consumed by the actual diplomatic interactions between you and the other aliens, which involves a lot of writing as well as a lot of design.  As part of that, I’ve also finished the design for spies, diplomats, thieves, and intelligence reports in general.

One of the fun things with intelligence reports (and consequently spies and diplomats) is that the game is not giving you the all-encompassing sort of knowledge that you have in The Last Federation.  I have found it’s more fun to be a little blind, because then I don’t get stuck in analysis paralysis so much — I’m able to fully see my OWN empire, but as with a game of cards I have to infer what is going on in my opponents’ hands by their actions and mannerisms.  This is part of why the diplomatic screen lets you jot down notes to yourself. 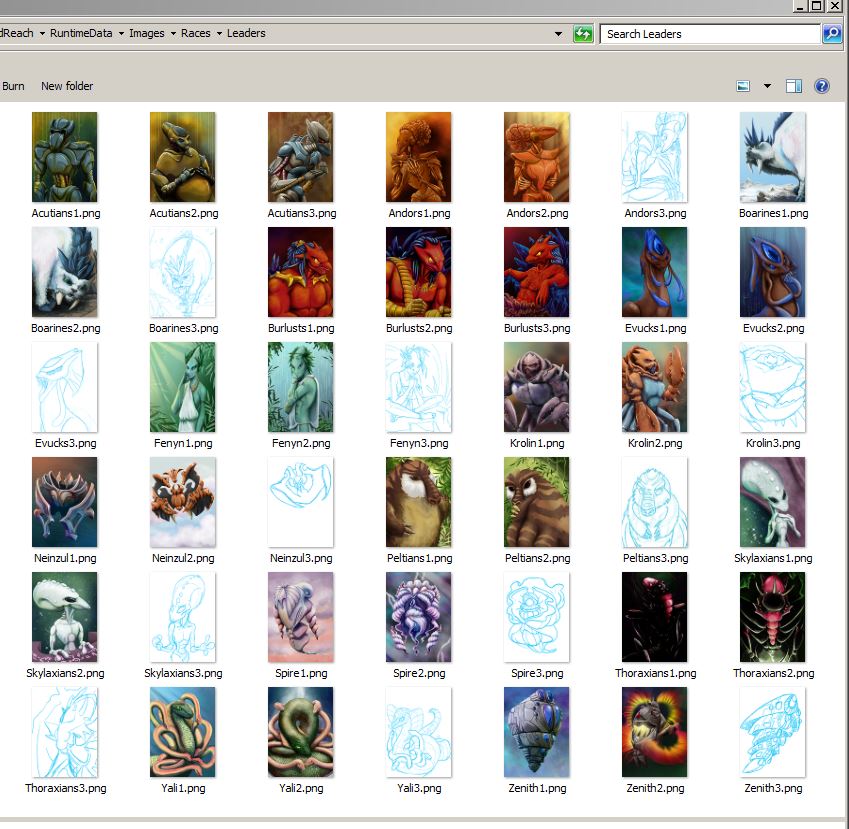 One thing that is fun is that since each race has 3 different possible racial leaders, that’s 42 leaders in all.  They all have their own goals and personalities and strengths and weaknesses even within their faction, and so the faction might act and perform very differently under leader A versus leader B.  Also, which factions get along well is determined heavily by the many (many, many) defined attributes of the leaders.  A lot of these personality-specific attributes specifically play into letting the AI leaders interact with one another (and react to you) based on procedural means rather than hard-coded rules. 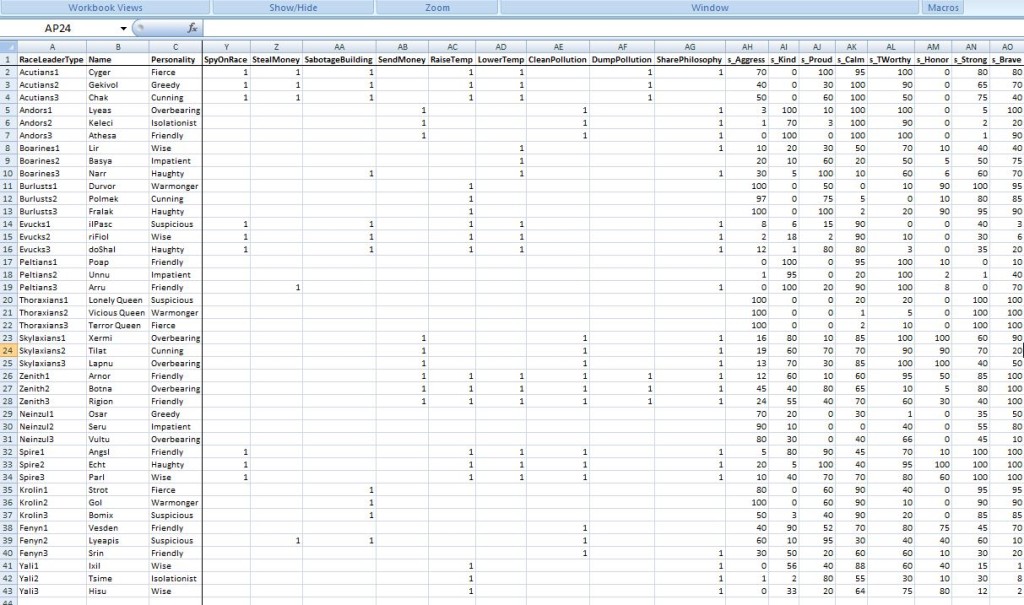 It’s pretty cool, because manipulating spreadsheets thus lets the behaviors of the AI really change quite a bit.  Anyway, but the core point here is that each leader makes the faction act pretty darn differently — and they may be bent on something nice as their goal, or something quite homicidal.  This is… useful to know, to put it mildly. 😉  But you don’t know!  These guys play it close to the chest.

Well, that’s where the spies come in.  You can infer some things based on talking to the AIs (if you can understand them) and seeing what they say back to you.  If you’re aggressive and they like it, that’s… maybe not a good sign (hi Burlusts).  Then again, maybe they were just intimidated (hi Peltians).  Part of the problem is that the identity of the leader is actually a secret at first, so even if you use a cheat sheet and look at the spreadsheet or a source online, you’re not going to just know immediately what is up.

Time to send in the spies, if you care enough!  Of course, that does take some time and money, and when spies are caught that erodes trust somewhat between you and the race you’re spying on.  They won’t like you any less (or more), but they will trust you less.  Anyway, as your spies (and diplomats, to a lesser degree) gather data on both the leader’s attributes and the goings-on in the empire you’re looking at, eventually you get a full picture of who the leader is and what they want — and then their identity is revealed.

I think of this kind of like “informational fog of war.”  Exploring the map is one thing, but also getting to know your potential adversaries and allies is another.

Speaking of getting to know your neighbors, Cath and I were talking about the Zenith this morning.  The first buildings from their faction are only now being painted (were sculpted a while back), and so she’s trying to get a sense for their race and how to represent them.  We’ve had their terrain done for months, but the terrain is a different beast than the actual direct place where a race lives — related, but not the same. 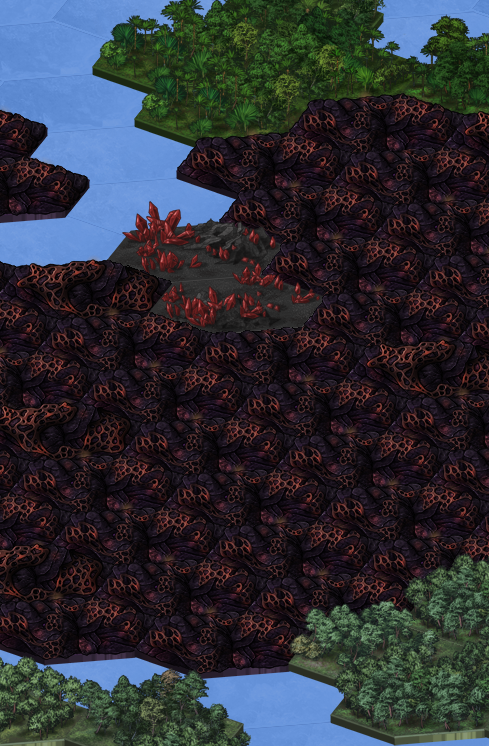 She was going through information about the Zenith on the forums and the wiki, but not finding out enough about them from the sources that were AI War focused.  AI War never really delved into their backstory as much.  At the time, I preferred to leave them as more mysterious.  And they were long-dead in that part of the galaxy, anyway.  The Zenith that you meet in Stars Beyond Reach are a different pocket of the race that are only cousins to the dead relics that you find in AI War.

As I’ve been designing their leaders and their race in general, a solid picture of them has been emerging, so it was a quick thing I wrote up to help provide some inspiration for the painting she was doing.  I figured I’d share that with you as well — why not have more info out there in public about them, after all. 🙂

So here’s way more background on the Zenith than you probably ever wanted to know:

1. Each giant shell is a creature in and of itself, so each building is a living being.

2. The beings themselves are practically immortal, and are often billions of years old.

3. However, they are neither the Old Wise Man sort of trope, nor do they look down on other races. They’re just… at peace. They’re pretty calm and easygoing.

4. Their main quest is for knowledge, and they spend a lot of their time engaged in philosophy.

5. They do die, just not from natural causes. So that’s one of the things that they do contemplate, because it’s not an inevitability for them.

6. All the shells and so forth littered around their landscape are kind of sheddings from their body, OR from the lower life forms that serve them.

7. The Zenith themselves have some smaller animals that resemble them in many ways, but which have a shorter lifespan. But it’s not a master-slave relationship, or even a servant-master relationship. Think of your relationship to the bacteria in your gut, or the microbes on your skin. You’re not on similar mental planes at all, and you don’t really think about them, even though they are vital to your survival. You are also vital to theirs, though they don’t have any concept of “thinking” about you that we would consider meaningful. Still, you are literally the world to them, as they exist on you as we do on the earth.

8. The Zenith are very powerful thanks to simply having been around a long time. However, they don’t actively cultivate the art of war (unlike, say, the Spire or the Thoraxians or similar), so they aren’t as powerful as they could have been. The Spire a much more Type A personality that is very engaged and active, whereas the Zenith are more laid-back. They aren’t sloth-like or idle, they just take time to smell the roses — partly because time doesn’t really have the same meaning to them as it does to you or I. After all, death is not an inevitability for them.

9. Their technology is all 100% organic. Even the things that are iron plating or whatnot have been manufactured by their own bodies. They don’t use machines as we think of them. However, they have been able to use organic means to augment their bodies. It’s theoretically possible to create computers out of organic matter, and in fact they have done so. Similarly, it’s possible (and seen in nature) to do things like make welds or generate extreme heat or whatnot using just organic means. Even generate electricity (heck, WE do that bit). The Zenith have basically mastered all of these biological processes, and they exist as a form of “high technology” society that doesn’t actually have anything that we would consider technology normally.

10. When it comes to their environment, for the most part the terrain around them is just the organic byproducts of their existence. That said, in their direct vicinity things would be kept a bit more neat and orderly by the simple fact of the smaller organisms that live on and around them, helping them exist. I imagine that these smaller organisms would leave a variety of trails like deer paths in the woods, but those are paths made by repetition, not design. Deer aren’t out in the woods laying down roads, and we don’t spend time making roads for deer, either. Whatever paths they have are simply made by repeated passage of deer. Same with these smaller organisms. 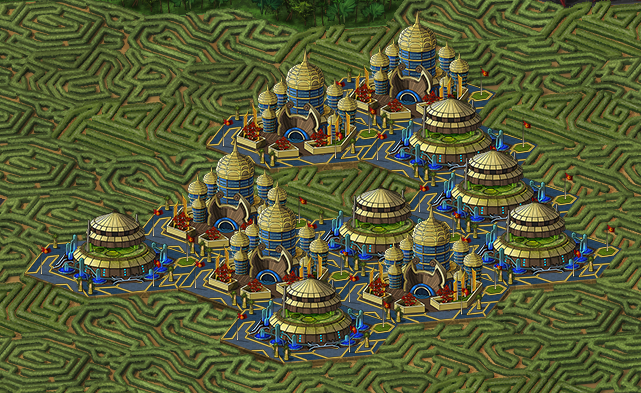 That’s it for now!  I hope you’ve enjoyed the test screenshots here as well.  Sorry that some of them were just cruddy screengrabs from explorer or excel.