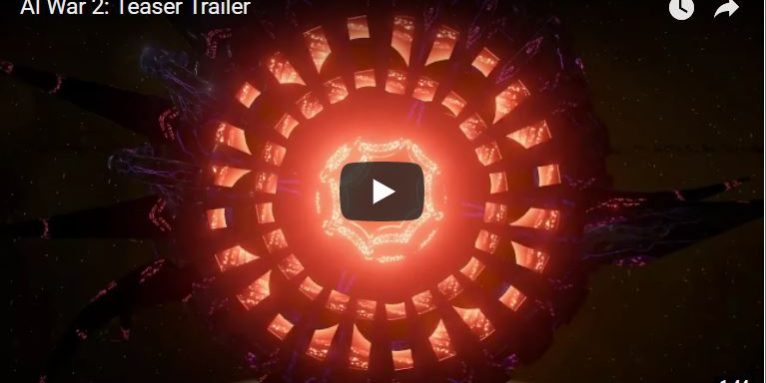 We’ve hit a juncture point with AI War 2. We’ve built a lot of cool things, learned a lot, and now it’s time for a soft reboot. The current plan is to pivot the gameplay to very closely resemble the original AI War, but on our new engine, and then build up from that foundation.

So very much is going right with this game, from a technical level and an engine standpoint.

On that note, here’s an excellent new teaser trailer that Chris and Craig created together. It’s light on details, but it’s just a teaser, after all:

The new game just isn’t living up to the first one’s legacy. We started out with a lot of design shifts away from the original AI War, and the design just hasn’t been as robust or fun as the original.

We’ve done quite a lot of engine work to make the actual game that runs on top of it mostly data-driven, so we have a pretty decent amount of flexibility here. For the last few months, we’ve been chasing various issues in gameplay, trying to tidy those up, but it just kept feeling less and less “like AI War.” So, we had two options:

As you have likely already gathered, we’re going with option 2. As players, Keith and I have been really let down by how different certain sequels felt from their predecessors, and we really didn’t want to do that to you folks.

We want this to be the sequel you truly wanted, that takes the original game and then goes forward in a refinement fashion. Total Annihilation turns into Supreme Commander, not SupCom becoming SupCom 2. Age of Empires 1 begets AOE2, not AOE2 morphing into AOE3. All of those games listed are good, but there’s a reason that the second in each series is typically more acclaimed than the third.

We do know that some of you backed for something more radical in departure from the original game. Why have the same old experience again? That’s certainly a valid point, and that’s why we talk about this as being a foundation for future growth.

Look at how much the first game grew from version 1.0, way back in 2009, through six expansions and version 8.0 in 2014. They’re radically different games. That said, we were constrained at every turn by an engine that was designed for street racing, and that we were trying to take offroad. That just doesn’t work.

The new engine for AI War 2 is so robust and flexible that we can take it street racing, offroad, or underwater. Maybe we can have our cake and eat it too, at least eventually? Based on the underlying engine, there’s nothing stopping us from having n factions, xyz ships, and all sorts of new sub-games and mechanics on top of it if the response to the baseline is positive enough.

One example: We’ve floated a variety of crazy ideas about hacking in the last few weeks, for instance; and while those are Way Out Of Scope right now, there’s nothing stopping us from implementing those exact systems or something like them a year or two from now, once we know the baseline game is fun and feels “like AI War.”

Second example: in the preliminary design document we’re working on, check out the section way at the bottom about using Arks as champions. That’s something that we want to attempt sooner than later, and it could be an enormous leap forward on the “radical new ideas” front. Same with the mercenaries section in that document.

At this point, we’re looking at Early Access (the “fun point” fulcrum) being sometime in July. That will give us a lot of time to further implement Eric’s UI and refine some visual elements and whatnot while we’re at it. Obviously, schedules change, and this is a tight one on the side of Keith’s core gameplay work.

THAT said, the transition toward the fun point is going to come in 5 overall waves of core features from Keith. The 1st wave being minimum set of units to have a functional, winnable and losable game; the 2nd focusing on core variety; 3 and 4 focusing on various toys on human and AI sides; and 5 wrapping up the last toys as well as adding the minor factions noted on the design doc as being pre-fun-point. (Nemesis and Spire are both post-1.0)

Hopefully we’ll have a general idea of our progress, and people’s reactions to it, throughout those five waves.

After Early Access starts, there’s a bunch more stuff to add and tune, and we think the 1.0 can still be October. Some of the stretch goal content (Spire, interplanetary weapons, possibly some merc stuff) may be after 1.0, but that was always the plan, anyhow.

All the above said, this is not coming without cost; it’s a major financial blow to the company, and unfortunately we can’t afford to keep our longtime artist Blue after April. She’s been with us for five years, and will be sorely missed, but we’ve known for a while this might be something that had to happen (as did she).

We’re basically folding back down into a quasi-one-man company, although that’s giving me too much credit. I’ll be the only full-time employee, at any rate. Keith is part-time and has been for some time. With the AI War 2 project being almost a year over schedule, something had to give. For myself, I’ve taken on a lot of debt, and am about to take on more.

You better bet that the game is going to come out; we’re working hard to make this truly shine, not just as a half-baked, unenjoyable mess. We’re determined that this will arrive at 1.0 as something that we can be proud of and that you can enjoy for many hundreds of hours.

This Isn’t an Engine Overhaul

We want to emphasize this! The AI War 2 engine framework isn’t changing much. The engine we built basically kicks butt, with all the moddability and support for advanced UIs and multi-threading, and so much more.

What’s changing is what we do with that engine, back towards something we know was fun on a different (much worse) engine. That solid baseline will be something we can have confidence in, and will be a great place from which to grow.

Example question: “Is the engine is flexible enough to go back to the original vision of mobile Arks as your king unit, and no stationary home command station?” Answer: an emphatic YES. The engine is so flexible that you can designate a king-unit option in XML and select it through the interface. That king-unit could be a squadron of fighters if you want, or the largest spirecraft with steroid stats. All of that can be done, at this very moment already, without any need for more than XML edits.

In general there are a few upcoming stages:

At this point, Keith and I are feeling like the feature set as planned for the pre-fun-point is pretty darn huge on its own, and then there’s a variety of stuff planned for pre-1.0 that makes it even larger. We weren’t trying to expand the scope, but such is life.

There are also a number of ideas of varying tentativeness for after the fun-point that we want to try, such as bringing Arks in as a champion style. Things like that should really make the game feel like it has been taken to the next level compared to the first.

We’ll provide as much help as we can in getting you the info you need, and documenting all of this as things go on. If you have questions about where anything is, you can always ask Keith or Chris. Badger probably also knows, and before long we hope to have a solid stable of folks who know this well enough to help others.

Further, I feel it’s worth pointing out:

What do we WANT from modders?

A good question was raised: what are we really asking of modders, here? Honestly, that depends on the modder.

Some folks like putting in interface bits to solve personal pain points that they had with the original interface. Others have ideas for creative extra factions — for instance the Nanocaust — and we’d love to have those be something that you’re working on as we move toward 1.0, rather than as we move toward 2.0. If it’s all the same to you, anyway, it’s more valuable to us sooner than later, if that makes sense?

But in general, it’s kind of a “hey, if poking around at games like this is your sort of thing, we’re throwing a party and you’re invited.” We’re happy to show you around the house, not just throw you into the deep end of the pool without floaties.

We’re going to be aggressively pursuing the Fun Point, with Early Access to follow; and meanwhile building up and refining the UI, controls, and so forth to be the best that they can be.

On the further volunteering end of things: if you want to help out with any sort of balance testing or custom unit design using the mechanics that we decide on as final, then the XML is easy to edit, and our doors are always open on our forums and on mantis.

Thanks for your continued support!