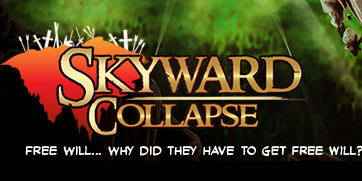 It’s been a crazy few days since Skyward Collapse launched late last week. The game has received a few new updates, the Steam community already has a guide up, and players (QuartertoThree, Octopus Overlords, Bay 12 Forums), video channel owners and press (Kotaku, PC Gamer, Cult of Mac) seem to be buzzing about it — for heaven’s sake, half of Co-Optimus is playing it!


PixelJudge: Skyward Collapse Review [5/5, 3/5, 4/5]
“I honestly tried to find even one element that could be seen as a flaw on Skyward Collapse. The problem is – it was nearly impossible, as everything the developers did here, they did great, giving us an astonishingly complex game which plays differently every time. The only weak spot would be the time required to actually understand what you are doing. Not everyone will have the patience, but then again, they shouldn’t have picked a strategy game if they don’t. Apart from that, Skyward Collapse is flawless and could be easily recommended to every gamer seeking some innovative, slow-paced, complex gameplay which will take ages to become boring!”

Dad’s Gaming Addiction: Skyward Collapse Review [8/10]
“Overall, I found ”Skyward Collapse” to be an intensely in-depth strategy game.  It looks simple on the surface, but there a ton of things going on behind the scenes that will keep analysts busy for hours.  Luckily, the easier difficulties allow those who don’t want to dive into all of the number crunching a chance to experience the game in a casual manner.”

Broken Analog: Skyward Collapse Review [8.5/10]
“I have begun to associate Arcen Games with their unique take on strategy games, but I have started to play their games more and more due to the wonderful soundtracks. A Valley Without Wind 2 has a great soundtrack, and Shattered Haven’s music did a great job setting the atmosphere of the game. Skyward Collapse’s music has a nice mix of both, great atmosphere with a nice variety of musical styles. The music alone is a reason to pay attention to Skyward Collapse.”
Game Wisdom: Skyward Collapse Mythical Strategy [No Score]
“Normally the strategy genre was all about balance: making sure every unit has the proper counter, no strategy being completely dominate and so on. With Skyward you have powers that can kill everyone on the map except for Gods instantly, bestow invulnerability and more. Just try to imagine fitting that into a game of Starcraft.”

There’s been a good amount of interest from both YouTube and TwitchTV channel owners as well:

It’s still in the early going, but sales have been very solid. While I don’t have anything official to announce at the moment, the team is very confident Skyward Collapse will receive significant post-launch support moving forward. I sign off with some interviews and the rest of Skyward’s coverage. Until next time!