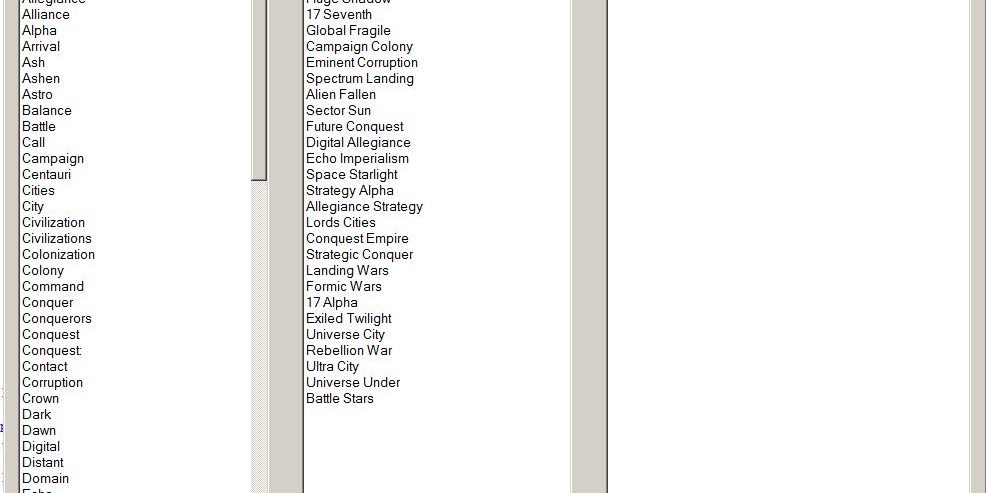 Bear with me, because this is going to sound strange.  First, let’s get the premise out of the way: naming games is hard, and it’s also incredibly important.

Why is it so important?  Well, take the following screenshot of Steam:

Unless you have banner rotation featuring, this is ALL people see of your game.  Even when your game is on sale, all they see is this, the base price, and the slashed price.  No screenshots, no trailer, no description, no tagline, nothing.  Just the little capsule image, the title, and the genres.

And you know what?  I’m okay with that.  Can you imagine how cluttered a storefront it would be if every game had even just a tagline?  Forget about it.  That would make people (including myself) glaze over even MORE when looking at the front page or the scanning through the discounts page.  The same is true of pretty much all the other major stores, incidentally, so this isn’t limited to Steam.

Obviously you have to have a good trailer, description, screenshots, and GAME on the other end of that clickthrough, but still — if nobody clicks through, you can have a great game that everybody overlooks.  Bionic Dues is one of those games that gets a really positive reception, got respectable reviews, and yet is very much overlooked.  At least one reviewer told me flat-out that the name was awful, and that he was frustrated by that because he felt like it would turn people away from the game.

There are a lot of reasons games sell or don’t sell, so we can’t blame anything entirely on the name for any game.  If a game is good enough, it will sell no matter what you call it.  If everyone is talking about a game, that will also overcome a mediocre name.  But what about all the games that are not inherently darlings with the press, that are exciting to a niche audience, and that therefore rely on storefront discoverability?  There the clickthrough rate is really important as a first step, and if that clickthrough rate is too low then you may just be kneecapping yourself.

After much brainstorming back in June, the name that we came up with for our upcoming 4X title was Spectral Empire.  I originally wanted something like Age of Ashes or Proto Colony, but those were really unpopular with our players.  And they didn’t really feel right to me, either.  After many many many attempts at names, we found one that was overwhelmingly popular: Spectral Empire.

That said, it’s only with a small group of our most dedicated fans, and in particular a group that was already weary from us trying out so many dozens of names on them.  There was some concern that “spectral” sounds like a fantasy game rather than a sci-fi one, but we all kind of brushed that aside as a cost of the process.

More recently, as we’ve been working on the internal prototype for the game, I’ve been getting more and more unhappy with the name.  I brought that up, and immediately some of the other staff said they’d been having the same feeling.  It wasn’t really a conscious thing at first, I don’t think, it was just a growing discomfort that wasn’t fully noticeable until a certain amount of time had passed.  (Which is one of many good reasons not to name your game at the last second, incidentally).

So now we are again trying to find a name for our 4X game with the help of our players, and thus far not coming up with anything that really immediately excites any of us.  Lots of brainstorming, which is great, but there’s nothing yet that makes ANY of us just go “oooh, that’s the one!”

A name for a game can obviously be a variety of things.  It can be off-the-wall and eye-catching for that reason.  It can be pretty and symbolic and thus make people curious.  It can be funny.  It can be evocative of its genre, and thus pique interest in that way.

Of course, they all carry risks.  Off-the-wall is likely to miss a lot of people who have no idea what it is.  Pretty and symbolic may be a turnoff to some people who think it is pretentious and/or again have no idea what it is.  Humor is a fine line no matter what you do, since all people don’t find the same things funny.  And with “serious” games like the strategy or simulation genres, or even with hardcore first person shooters for that matter, a funny title can really be a mood-killer.  Being evocative of its genre is ALWAYS a good idea if you can manage it, but you risk delving too far into “Generic Game #56” names.  Let’s call it “Empire Combat: Age of War!”  Er… no.

So if you’re having trouble coming up with a name, and are anything like me, then what you wind up with is an increasing collection of possible words that can go in a name.  But what combination of them?  And in what order?  The more you brainstorm, the more potential words you wind up with, and the harder it gets to even consider all the various combinations.  I realized it was hitting a point where my brain just couldn’t do the job well anymore, and so I coded up a little tool to help.

First of all, you can download the compiled version here.  If that version doesn’t quite do what you need, then here’s the C# source code for it.  I hope it helps. 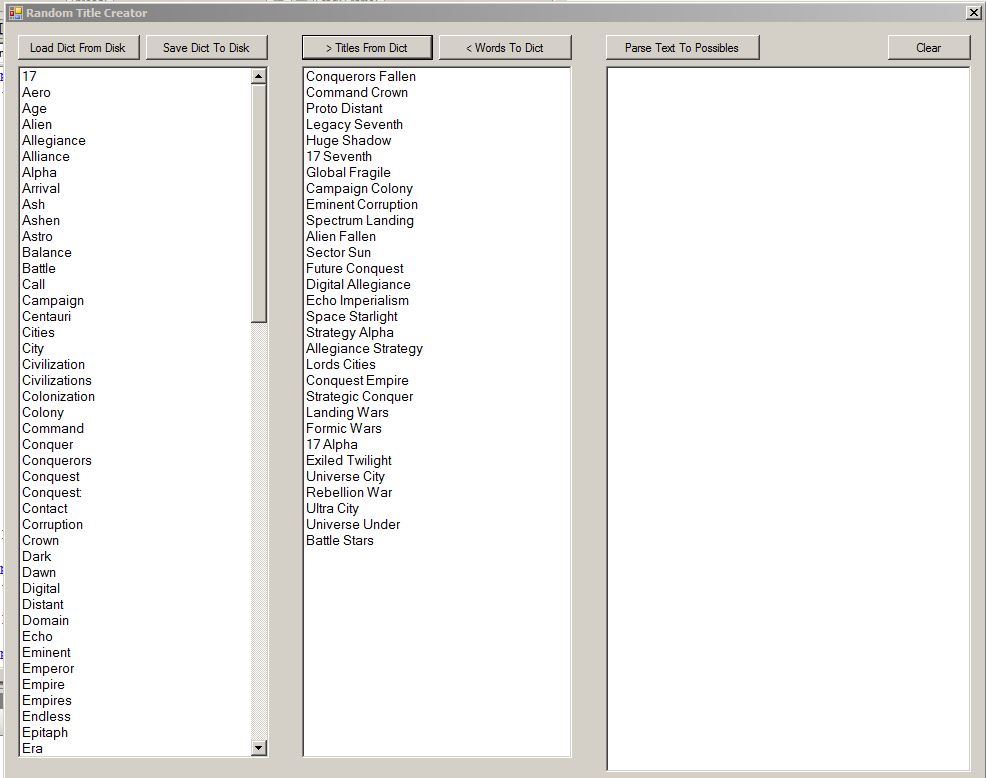 The middle column is kind of the “working column,” and gets used for two purposes.

Purpose one for the middle column is as a place to show potential game names.  If you hit the “> Titles From Dict” button, then it will make a list of randomized two-word combinations of words from the dictionary on the left.  Obviously your title may not be two-words, but when you see something like “Lords Cities” that almost-kinda makes sense, it can spark you to think “ah, Lords of Cities.”  And of course that name stinks too, but anyway my point is that just doing two-word pairings is I think the simplest way to inspire even titles that have more words than that.  If you disagree and come up with a better approach for multi-word titles, then definitely feel free to re-share your altered version of the source code and/or executable.

The right-hand column is actually a big textbox.  You can paste anything you want into there.  Paste the words of a sci-fi novel in there.  Paste the names of every strategy game ever made into there.  Whatever you like.  Then click Parse Text To Possibilities, and it will write the distinct words into the middle column.  That’s purpose 2 for the middle column.  When you do this, it will order the central column by the most frequently used words.  So if you post the collected works of Issac Asimov, for instance, you can find all the most commonly used words by him and potentially get some inspiration from there (after you sort through all the “if” “you” “he” “she” “it” clutter, of course).

The Clear button over on the far right just clears the middle and right columns.

Anyway, so that’s how you build up your dictionary, and how you then generate potential names from that.

Also, I suggest the One Look Reverse Dictionary as an awesome resource.  It’s very much like a thesaurus in many ways, but the two are definitely distinct.  The reverse dictionary is a lot less literal and gives you some extended phrases and ideas that can be further afield.  It’s particularly useful for naming things.  I wind up using both quite a bit, and then the resulting words can just be fed right into the dictionary here.