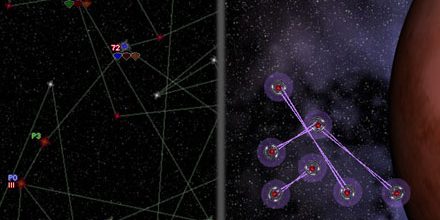 Arcen Games is pleased to announce the release of AI War: Fleet
Command version 1.008. You can download a trial version
of the game, as well as purchase
a license key to unlock the full version. If you already have the
game or demo installed, just hit “Check For Updates” inside the game to
get the latest patch.

More Free DLC: The primary upgrade in this release is
improvements to the AI and how the players can interact with them.
Planets on the galaxy map now show up as red (as seen below left) when
the AI is likely to reinforce at them.  This helps the human players
avoid tipping their hand too soon and causing key AI planets to
reinforce too heavily.

Additionally, AI players will now reinforce their wormholes much like
the human players tend to do.  This makes deep raiding much more
difficult and interesting, and requires many new tactics.  In response
to this, the human scouts are now much upgraded — they all now include
Cloaking, and most also now have a Cloaking Booster ability (as seen
below right) that makes them even more effective in groups. 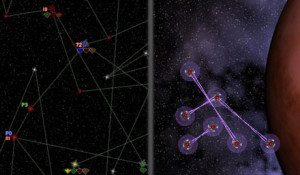 In addition to the above, this release also contains another large batch
of improvements, tweaks, and extensions based on player suggestions.
Here are some of the highlights:

– Capturable ships now are now only captured after a command station
is finished being built.

– Waypoints can now be queued in conjunction with wormhole-movement
commands.

– Ships can now move between planets in attack-move or free-roaming
defender modes.

– Repair Stations and Mark II Engineers have had a range upgrade.

– Cloaked ships will no longer auto-fire at enemy ships unless in
attack-move/free-roaming mode.  This helps them maintain invisibility on
longer raids.

– New Ship: Wormhole Command Posts are a perma-cloaked ship used by
AIs to reinforce their wormholes. Kill the command station to kill
these.

– Scouts and EyeBots have been heavily upgraded to deal with the
newer wormhole threats; they now all have cloaking, and most have a new
Cloaking Booster ability.

– Control group icons are now included in the planetary summary.

– The range of all tachyon beam emitters is now higher.

– Lightning Missiles have been made a bit more durable.

– A new “AI Alert Level” is now shown on the galaxy map intel
summaries, showing at which planets the AI is likely to do
reinforcements.

– Fixed Astro Trains just hanging out at their stations.

– Fixed a bug with AI players getting new ship types at too fast a
rate.

– Fixed a 1.007 bug where too many Advanced Research Stations and
Data Centers were being created on maps 80 planets and up.

The above list is just a sampling, however, so be sure to check out the
full release notes to see everything (attached at the end of this post).
More free DLC will be heading your way next week. Enjoy!