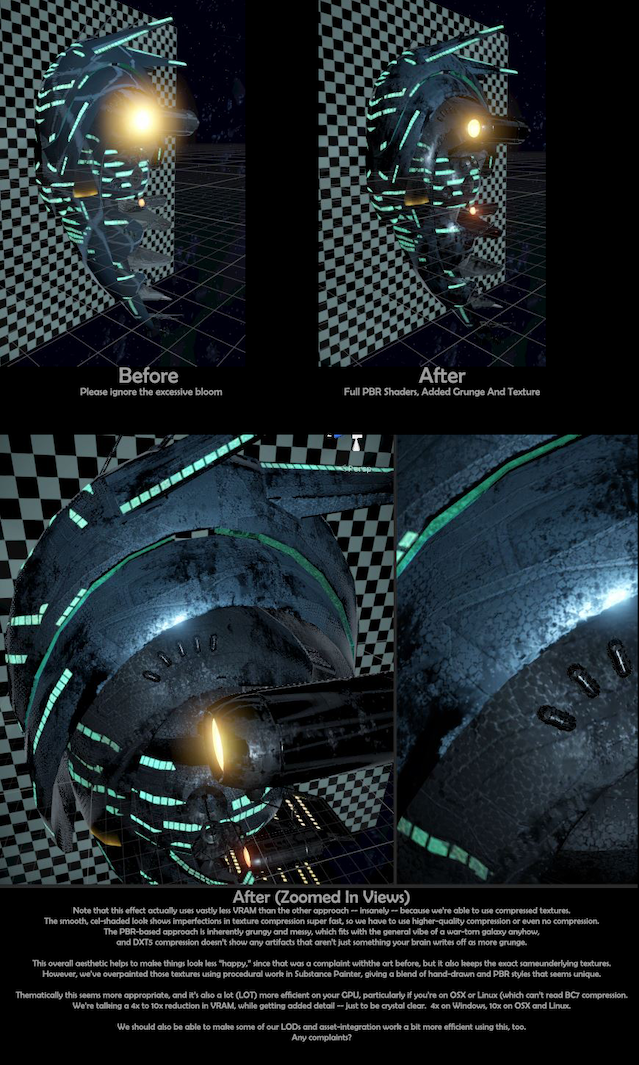 Chris here!  Wanted to run something by folks.

Hopefully you can click on that and get the fully zoomed-in full-quality version.  If not, here is a link to a version that will definitely be full size.

In case that (tiny, tiny) text at the bottom is hard to read, here’s what it says:

Note that this effect actually uses vastly less VRAM than the other approach — insanely — because we’re able to use compressed textures. The smooth, cel-shaded look shows imperfections in texture compression super fast, so we have to use higher-quality compression or even no compression. The PBR-based approach is inherently grungy and messy, which fits with the general vibe of a war-torn galaxy anyhow, and DXT5 compression doesn’t show any artifacts that aren’t just something your brain writes off as more grunge.

This overall aesthetic helps to make things look less “happy,” since that was a complaint withthe art before, but it also keeps the exact sameunderlying textures. However, we’ve overpainted those textures using procedural work in Substance Painter, giving a blend of hand-drawn and PBR styles that seems unique.

Thematically this seems more appropriate, and it’s also a lot (LOT) more efficient on your GPU, particularly if you’re on OSX or Linux (which can’t read BC7 compression. We’re talking a 4x to 10x reduction in VRAM, while getting added detail — just to be crystal clear. 4x on Windows, 10x on OSX and Linux.

We should also be able to make some of our LODs and asset-integration work a bit more efficient using this, too.

Oh, Also — About The GUI

We’re having a lot of discussion about the GUI, and I’ve made a pair of videos on the topic.  Cyborg has been a huge help in focusing our attention in a positive way in this particular area.

Also, when it comes to the vibrance of the space backgrounds I’ve toned those down as of today, too — with the next build that comes out, 0.601, those will be much more muted.

And About Those Remaining Keys…

Still waiting on those from Valve.  So sorry about that!  I assume I’ll have the keys from Valve either this afternoon (PST) or tomorrow afternoon.  Otherwise I’ll get up with my contact there.