You are here:
NewsworthyStarward Rogue 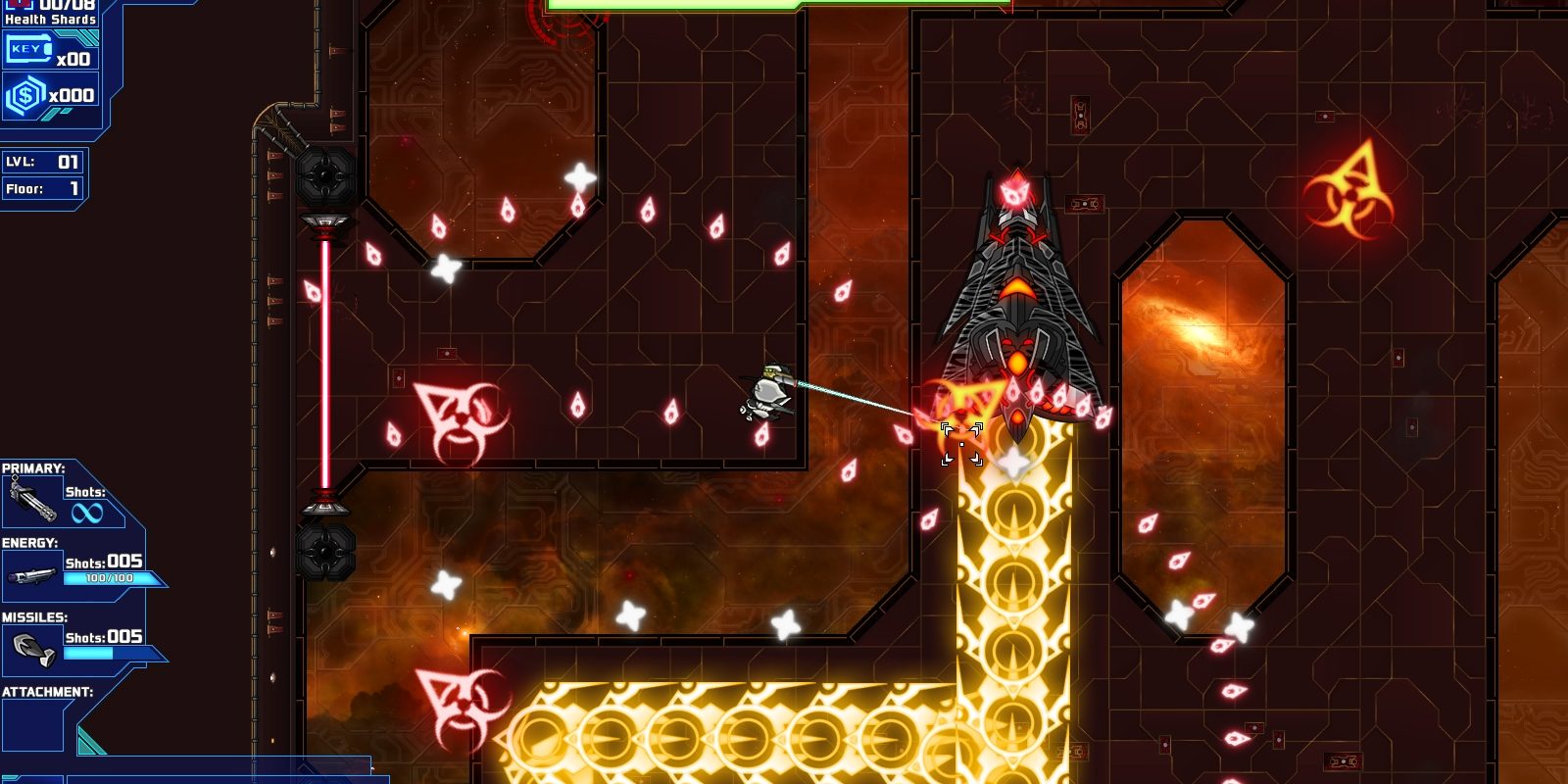 Hey!  Didn’t think we forgot about Starward Rogue, did you?  There’s been a ton of stuff going on with it, though we’ve not had a release since May.

I’m going to break this post into two parts: an “abstract,” if you will, that is briefer and up here at the top.  And then an incredibly-long section below with all the details.  So when you see the length of this thing, feel free to stop reading after the abstract.  Here we go! 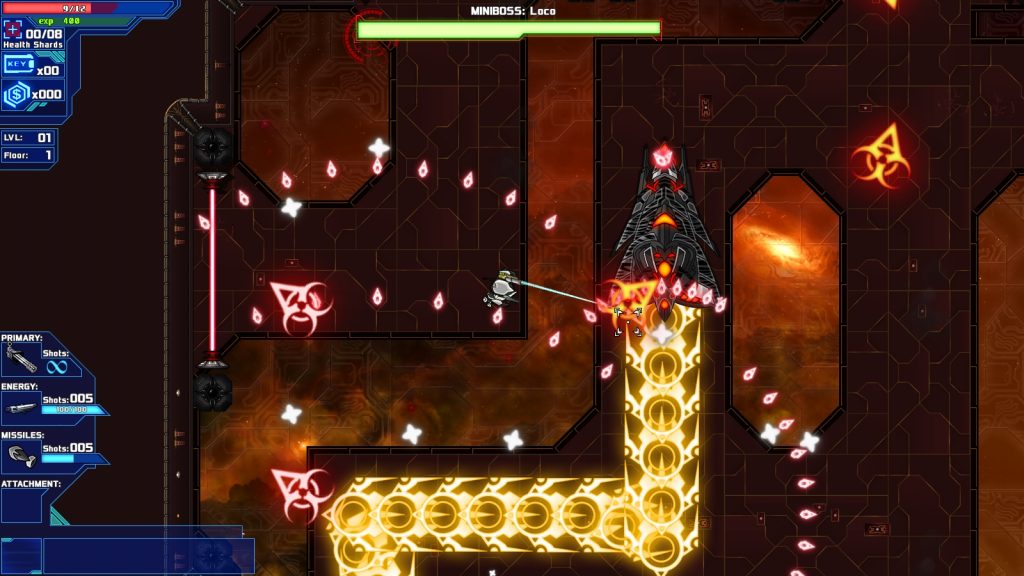 The TLDR is that this game is being included in the August Humble Monthly, and as a part of that they sponsored some awesome new content that is available for everybody — if you already have the game, you’re getting this content for free, too.

BUT we also have a bunch of other awesome updates that go along with this that are unrelated to Humble, but are just things-that-have-been-in-progress-since-May.  The difference in the feel of the game, to me, is nothing short of incredible.  And I feel like I can take this moment to brag a bit, since I’ve had nothing to do with the specific content, given I’ve been busy with In Case of Emergency, Release Raptor for my own work.

The end boss, Terminus, is now incredibly more epic, which is very exciting.  Balance work has been done all over the place, and the ending areas of the game are a lot harder.  There are dozens of new things of various sorts: enemies, items, weapons, etc, etc.

Both the consumable shops and the sacrifice shops have gotten huge updates to be more useful and filled with more goodies.  There’s a new mech, bringing the total from 6 to 7.

There are also now teleporters that let you easily backtrack to key points that you’ve visited in the past on the current floor.  Saves a ton of time and streamlines exploration.  And lots, lots more. 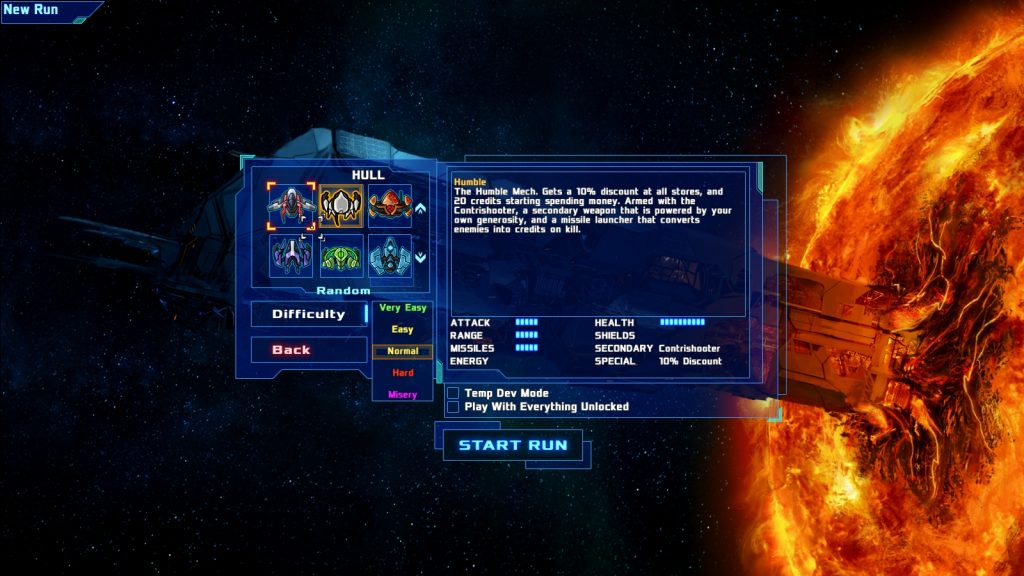 Description: Gets a 10% discount at all stores, and 20 credits starting spending money. Armed with the Contrishooter, a secondary weapon that is powered by your own generosity, and a missile launcher that converts enemies into credits on kill.

A bit of a game changing mechanic on this mech, due to it’s secondary weapon that uses credits instead of energy. 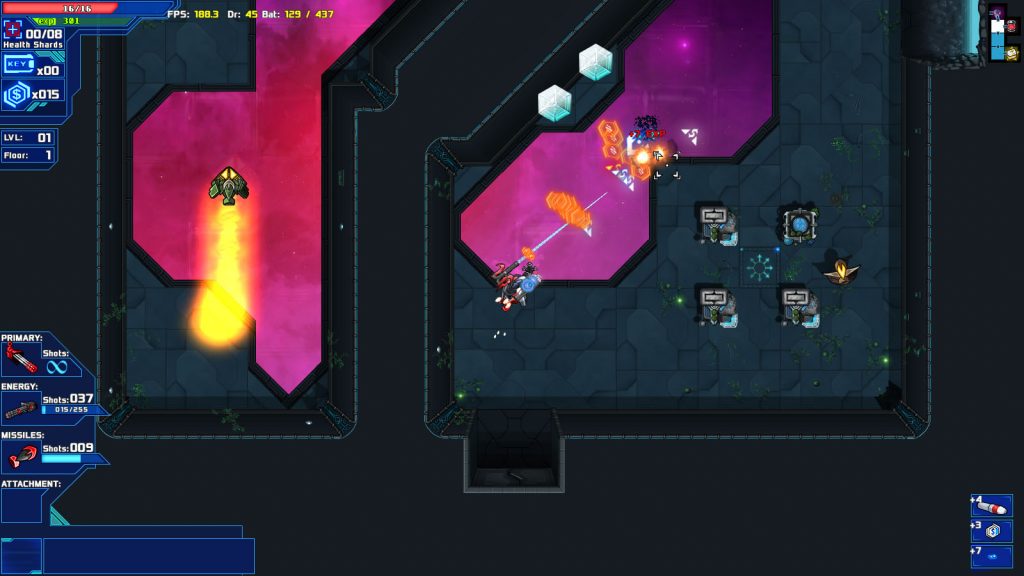 Note from Chris: This is my own favorite mech now, I think.  It’s definitely not overpowered, but it fits my playstyle really well.  I tend to be pretty frugal in the game, and having extra credits here actually encourages me to spend a bit more.

But even more than that, my frugality is rewarded a bit in that I can unleash a ton of hurt on bosses with the Contrishooter.  All of the existing mechs (there are 6 until now) are great and each fit a specific playstyle, but this is the first one that truly supports my own slightly-speedrunny-very-little-shopping playstyle. 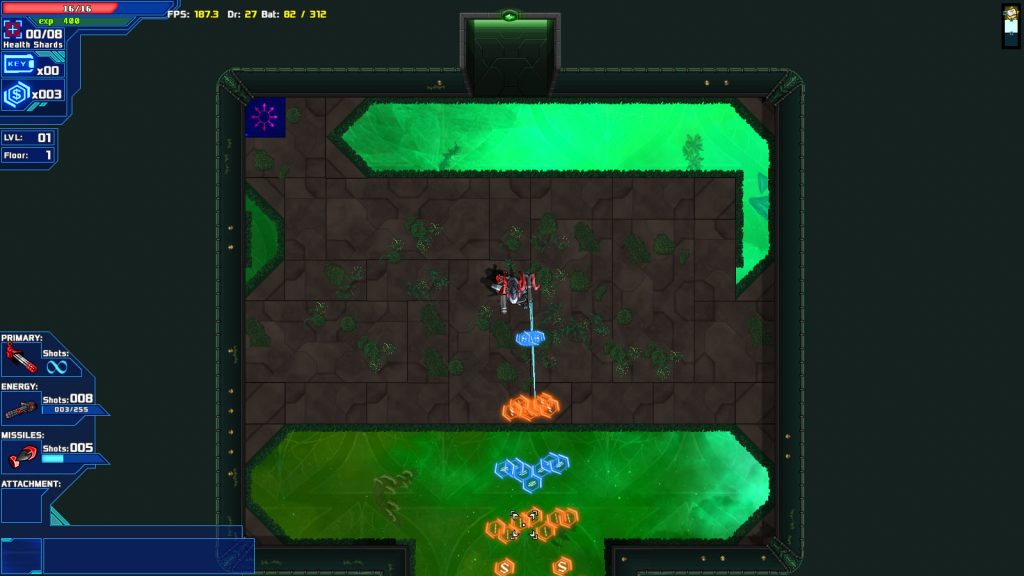 This is a new multi phase boss that uses two sets of orbiting minions as its defense.

If you don’t mind spoilers, here’s a video of the Hard mode version of the Humble-themed boss.  The normal mode version is not so intense.

Bear in mind that this takes extra time in that video because Misery was playing with no upgrades whatsoever to his mech, so the boss feels extra tanky thanks to that. In actual gameplay where you’ve collected items and leveled up and whatnot it dies at a better rate. 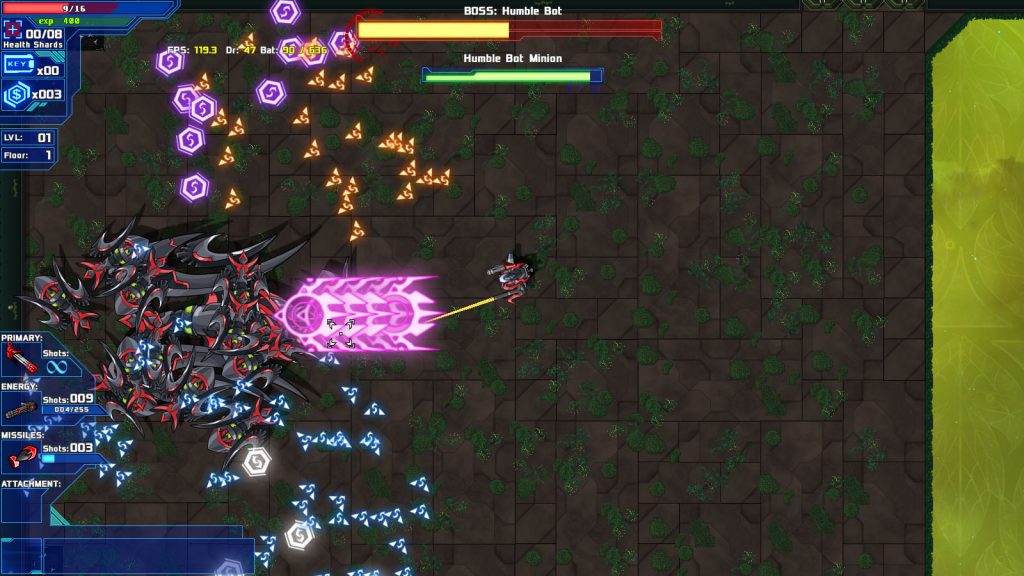 The consumable shop has always been something that most players wouldn’t normally have thought worthy of using a keycard on, so we decided to put some extra love here; the shop has been overhauled, including changes to its structure as well as the addition of a lot of new content. 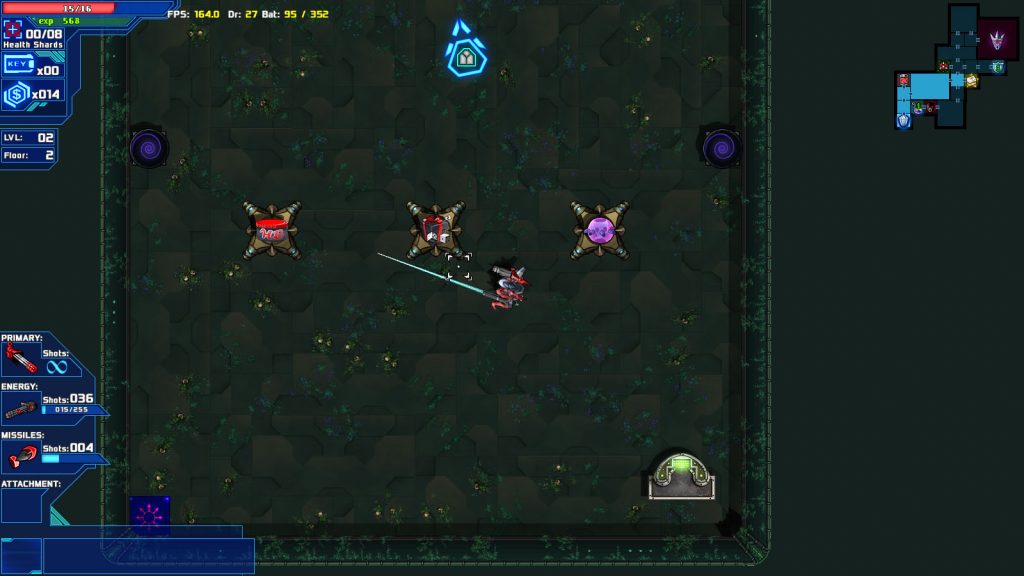 Firstly, there are two variants of this shop. The normal shop which the player will encounter on most of their runs, which features a few new Humble-themed items. Then, there is also a new special Humble Shop which appears more rarely, but has 7 slots for items — instead of 3. 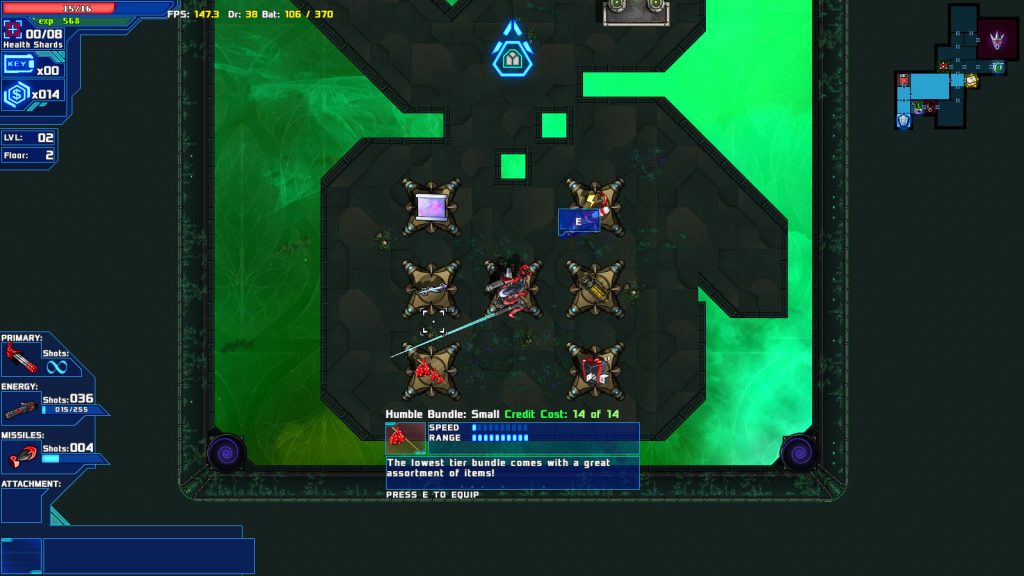 Here is a list of the Humble specific content that has been added as part of the Consumable shop overhaul. 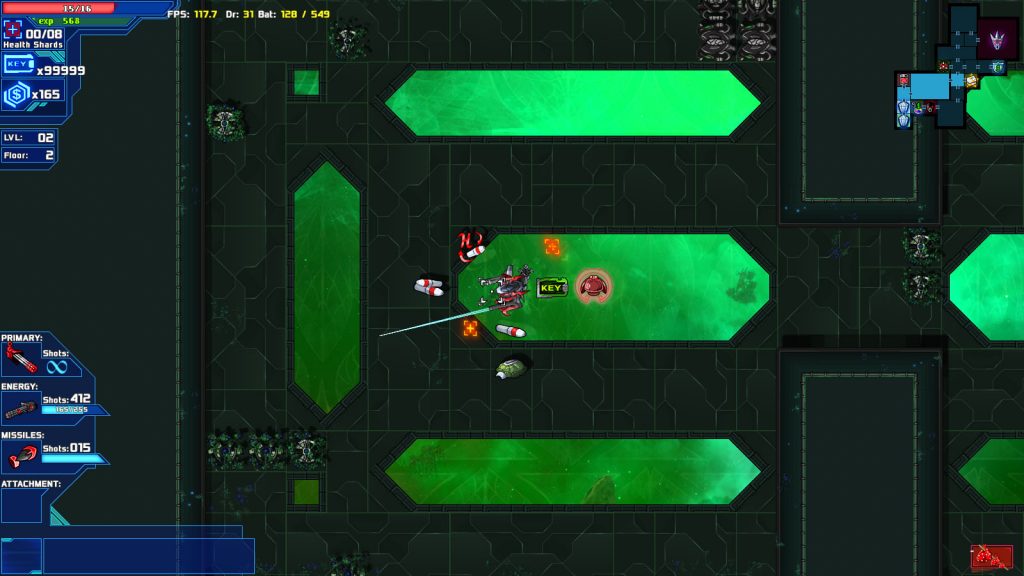 These things don’t have anything to do with Humble, but they are a part of the general 1.5 update of the game, so you’ll find these brand-new things waiting for you as you launch the game, too. 🙂

A long desired feature. Backtracking teleporters! These allow for much faster movement around the floors in order to making backtracking much easier.  You’ll see these in the corner of rooms.  They work rather like the Warp Whistle did in Zelda 1, except faster. 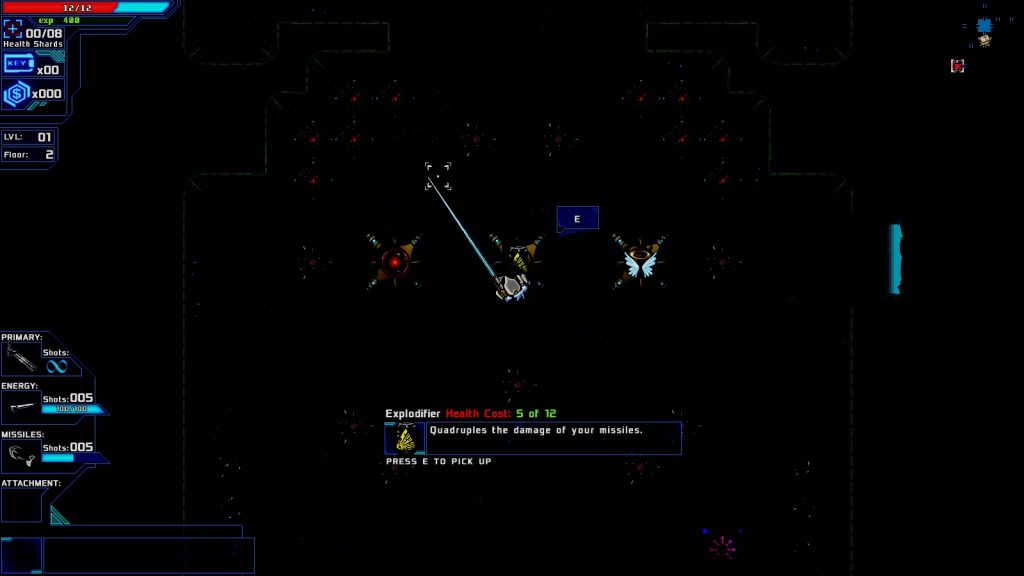 Here is the community brainstorming thread.

This really makes a big difference, because on long runs the sacrifice shops could be getting empty on the lower floors.

Numerous adjustments have been made to the enemies, especially those late game. Floors 6 and 7 are a lot tougher now. As well as just adjustments, there are also new enemies to fight including Fragment, Diffusion, and many other new variants of existing enemies. Watch out for those Blue Facerippers! 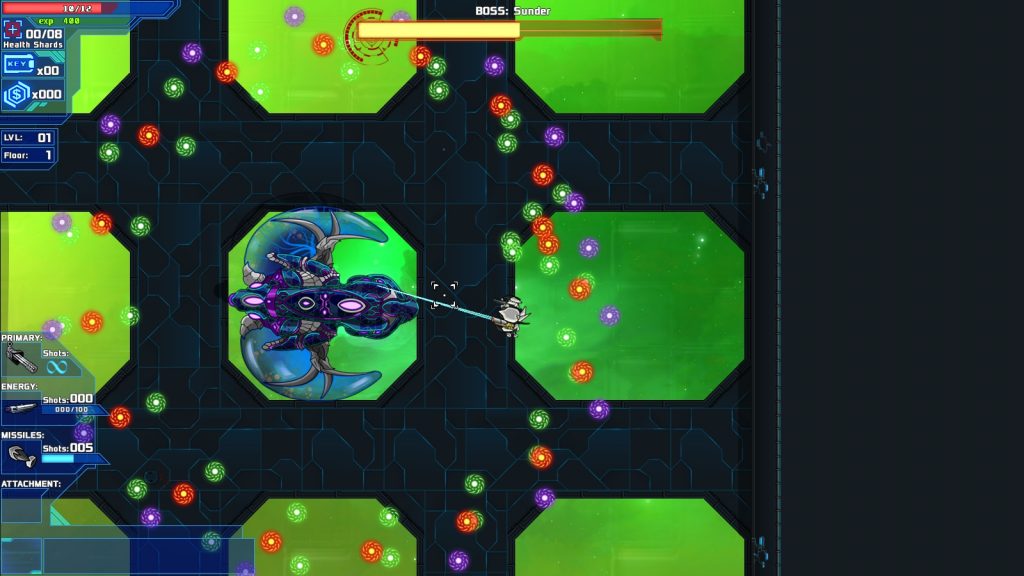 Misery has added a new boss called Sunder, as well as completely overhauling Terminus (the super-final boss). It’s now a crazy and epic fight worthy of being called the true final boss. New miniboss Loco has been added courtesy of Ptarth, plus a new Reaper variant, and a few improvements to the existing ones. 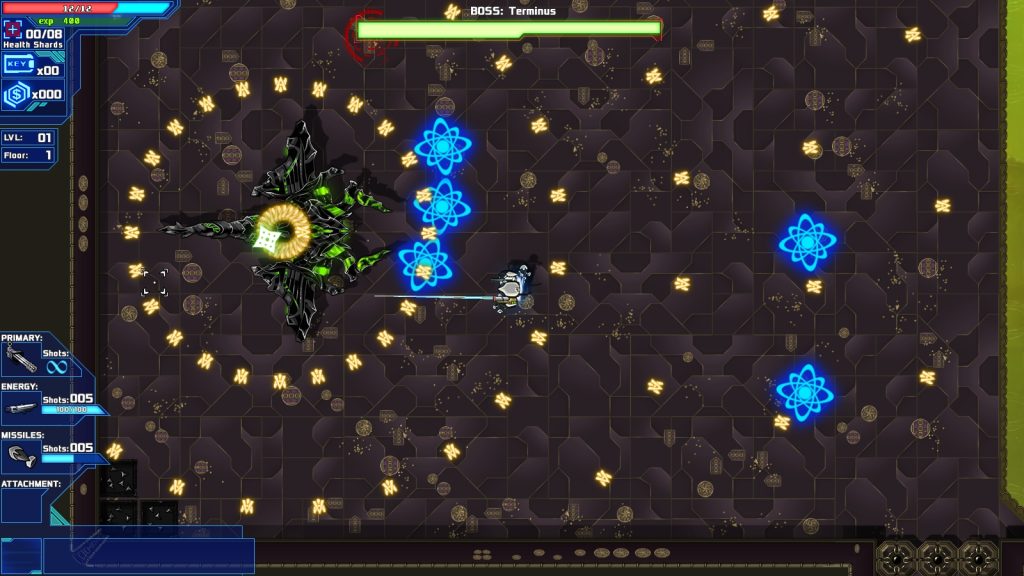 A few items have received some attention such as the Cryofreeze, Incineration, and the Sheltering Modules. Improvements for Limiter Removal, Phase Module, and many more.

Now it’s possible at add new mechs to the game without them overwriting the existing mechs. Now you can get a page scroll so that it’s possible to add as many mechs as desired. Very useful for modders.

And that’s all that we can remember, at least. 😉  The release notes are freaking long, and they don’t include anything from the Humble section.

This update is almost entirely brought to you by our awesome volunteers Misery, ptarth, Pepisolo, and Cinth.  They had some help from other community members in some cases, and Blue from our staff provided the art and Keith provided some coding, but they did all the heavy lifting.  I’m super impressed with their work.