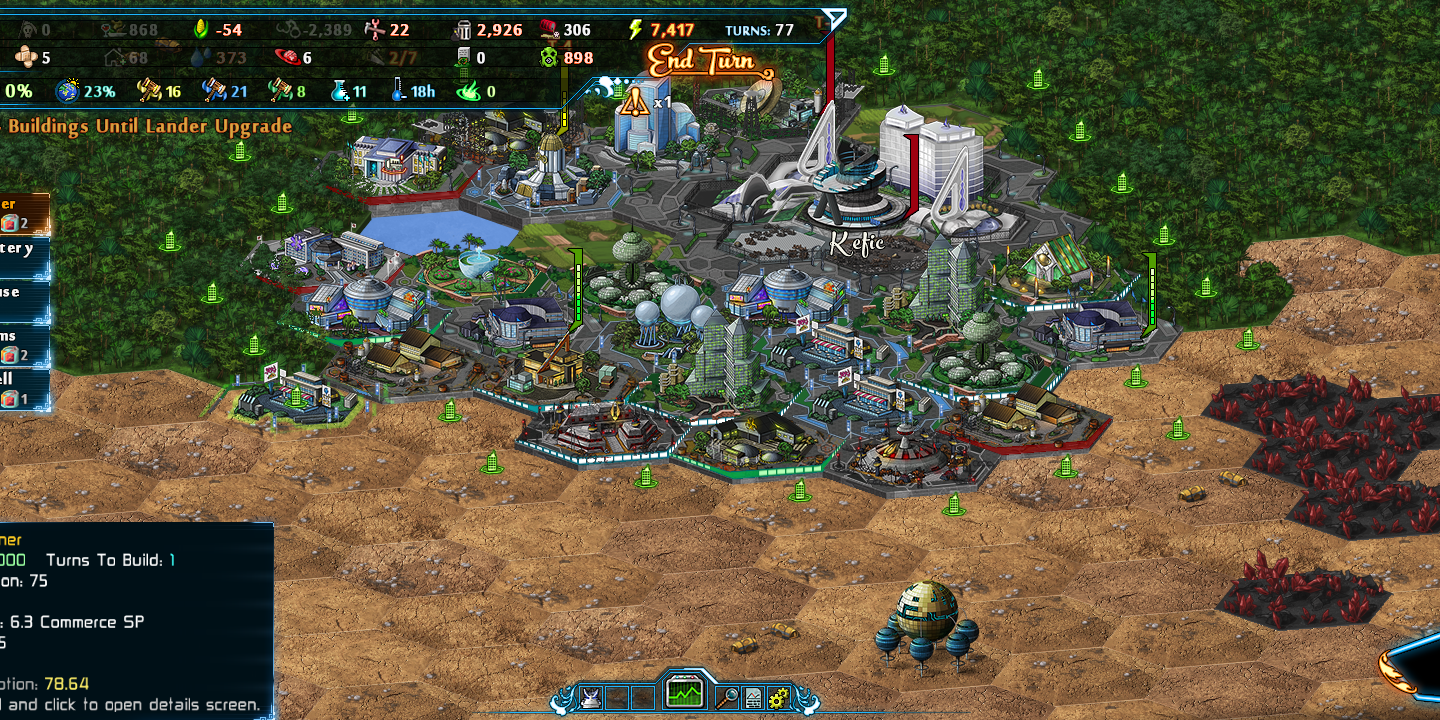 First off, the news: the release date for the game is shifting to early July rather than early June.  Why?  More time for polish, mainly.  Our first wave of beta testers (the redshirts) have been awesome, but there have been enough things going on that we haven’t even brought in the next round of testers (the blueshirts) yet.

The difference between a touchdown and fumbling the ball at the 1 yard line is pretty small, and in this case ultimately shooting for a June release would almost certainly be a fumble.  I’m super excited about this game, and our testers seem to be as well (always a good sign when their excitement remains after getting their hands on even a really rough early version), but we all agree that there’s a lot more to be done in the polish and balance department.

A lot of great things have already happened since the redshirts came in, including the implementation of our new HUD (see above), and getting crime and pollution and disease under control.  For a while there, cities would reach a certain size and then a death spiral was all but guaranteed.  There were mass mall shootings, citizens with like 5 terminal diseases at once, trash piled to the rooftops and bodies littering the streets, and so on.

A lot of it was actually really amusing, but it’s one of those things that just needs polish and time.  It’s also the sort of thing that just needs to have enough testers, frankly, as we continue to bring in people in waves.  A lot of those things weren’t biting me, for instance, since I play a certain way.  But get a larger group of people in, and suddenly different things bite different people in different ways.  It just takes time to polish all that out, and we want to make sure and give this game its due in that department.

So that’s what’s up!  Things will be speeding up substantially on Monday the 27th in terms of our ability to fix bugs and balance and so forth, by the way.  So there will be more frequent beta updates, and we’ll move closer to getting the blueshirts in sometime in the middle or late next week.  And then more groups of testers in waves after that.

The beta is absolutely free (though tips are appreciated if you want to give them), and we are taking people in groups.  The game is already at a point where it is feature complete, and has been for a bit.  The last few weeks I’ve been going through and wrecking stuff and figuring out balance and so on, but the game is huge and there’s a lot of that sort of thing to do.  This is a closed beta, which is basically saying that it’s invite-only.  That said, we don’t have a specific cap on the number of people that we’ll let in, so if you want to be added to the list of future beta players, please feel free to post on the forums here.

1. Redshirts.  These folks were thrown into the game right at the start, when documentation is the most-poor and so is the balance.  These guys jump on the early confusion-grenades so that later waves of beta testers don’t get hit by that particular brand of shrapnel. 😉

2. Blueshirts.  These folks will come in probably about a week from now.  The worst things will have been taken care of, and the blueshirts can clamber over the dead bodies of the redshirts to have a better first experience.  But it’s still a lot of live fire going on down there, if you know what I mean.

3. Everybody else.  I’ll be bringing in people in in batches every week or half week or so.  I want to space this out some, because we only get your first impression once, and as we polish the balance and documentation that is something I’d like to see the results of (is that clearer or not? etc.).

Help Us With Procedural Market Item Names! (If You Want)

Why Am I So Quiet Lately?

Sorry about that, folks.  I know that I’ve been absent in a ton of forum threads, and there are probably a ton of questions, comments, beta requests, and so on.  I will get to those!  They’re all stacked up in my inbox, waiting for me when I get a chance.  Right now I’ve been focusing on just plowing through some latent feature shifts and the GUI stuff, and some of the nastier bugs and balance issues.  I’ve been focused on mantis more than the forums in terms of trying to keep things on track.

Keith has had very limited time for the last couple of weeks, but he’ll be back in full force on Monday, as well.  So that will ease things off of me, and give me more time to respond on the forums, do my own testing, organize, etc.  Anyway, thanks again for your patience with my “on again off again” presence in the forums in particular.  It’s not something that I’m trying to do, I’m just really trying to keep a lot of plates spinning at once and feeling short a few hands right now.  That will change before too long, knock on wood. 🙂