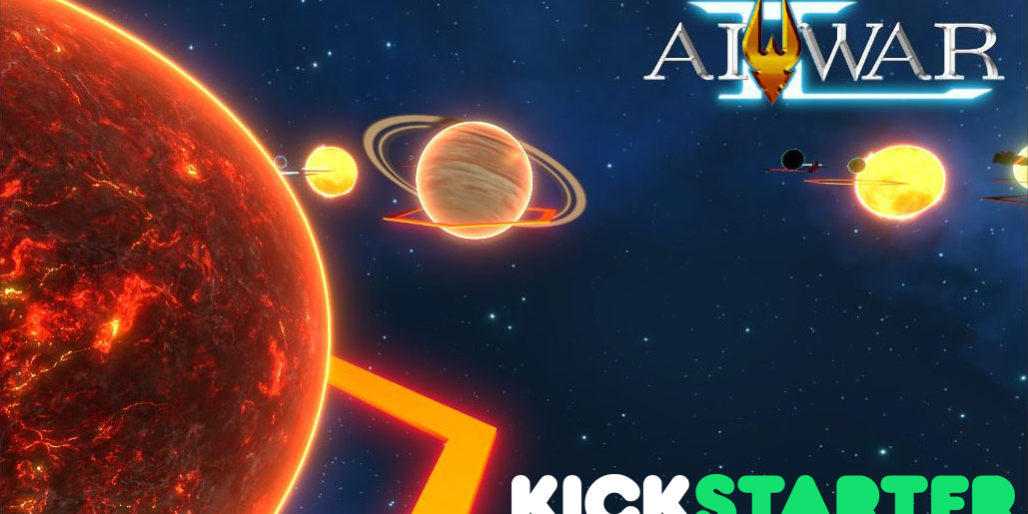 Wow, what a week! We’re hugely grateful for everyone’s attention and interest in our game, and we’re looking forward to bringing it to you!

With everything that’s been going on you might assume we’re focusing on the Kickstarter to the exclusion of all else. Nah, not our style. Work is underway on AI War 2 right this minute! Here’s a sneak peak at where we’re at right now.

Every unit in AI War Classic looks the same no matter who controls it. Your fighters look just like the AI’s fighters, and your capital ships look like AI capital ships. We’ve done a lot to make the player and the AI distinct in Classic, but fleets still look awfully similar.

We want to hammer home the alien-ness of of the AI in AI War 2. It has its own personality, why not its own visual design? With the AI taking over the galaxy and turning what it takes against you, you could say it’s a corrupting force. “Corruption” is the AI’s theme in AIW2. Let’s compare the human and AI ships:

The light trails alone make the jump to 3D worthwhile.

These are bombers which are good for blowing up structures and not the greatest in a stand up fight. Bombers in AI War 2 look different than their Classic counterparts; Blue based these Mark I bombers on the much more formidable looking Mk. IV and V bombers from that game. Chalk it up to 353 years of technological development. When the AI starts fielding bombers of their own… 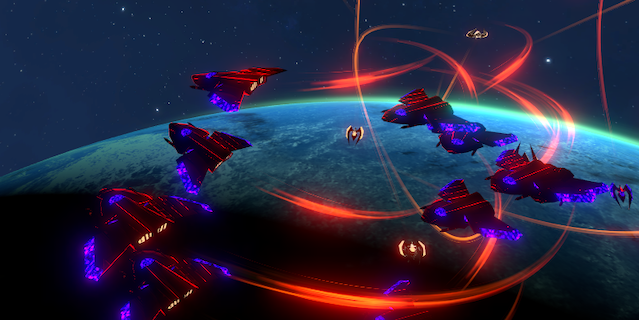 Though still a work in progress, AI ships are dark and oppressive, like proper galactic conquerors ought to be.

…they’re quite different, despite sharing a silhouette. Though these aren’t the final colors, AI ships are darker than their originals, have a darker light trail, and host moving corruption effects in place of highlights.

Now, all together and in motion:

Again, WIP, but notice how the human bombers behave vs. their AI counterparts.

I’ll let Chris talk about the how our ship designs have evolved over the last few weeks. Starting from the left and going right:

Not every ship will be in the game, but they’re all gorgeous.

Ask Arcen Anything A Success!

Tuesday’s Reddit AMA went so well we kept taking and answering questions until late last night! Check it out — we answered questions about everything from our intentions for AI War 2, system specs, Arcen’s website, and the questions we won’t answer.

Still have a burning question or just curious? We make a point of answering every question we get in as much detail as we have time for. Ask away here or on our forums, and you’ll get a response!

AI War 2 in the Media

We’ve been fantastically lucky with our media coverage. Rock Paper Shotgun’s Adam Smith reminded us why he loves AI War Classic, and highlighted three of the big features we’ve got planned for 2. He missed a few (dozen) others, but hopefully his planned reading of the design document gives him a chance to fix that. PCGamer, Gameranx, PC Invasion & DarkZero gave us a shout out as well! Explorminate, who interviewed Chris in April of last year, had some nice words about AIW2. And a number of our fans in the indie scene, most notably Wrathkal & Vegard, also took the time to talk about us.

To my personal delight, Dad’s Gaming Addiction took another whack at AI War Classic three years on. This time Vince takes on a pair of level 2 AIs… on a 10-planet map. Juuuuuust a bit of an uphill battle.

Capping things off, Chris will be on Three Moves Ahead next week! Look for that show to drop Wednesday the 19th.

That’s all for now, but we’ll have more AI War 2 news for you very soon. Please help us get the word out about AI War 2 on social media and on your favorite websites and forums! Thank you all for your support!