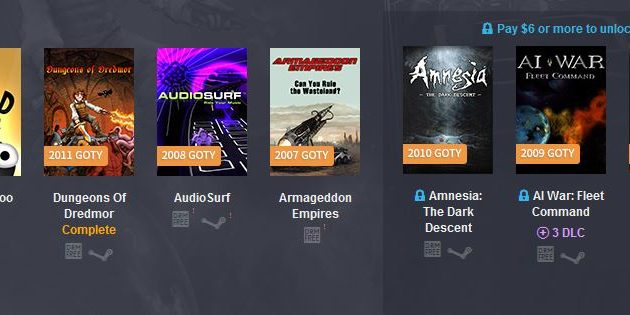 This RPS bundle is a career milestone for me. Several, really. First of all, the recognition that Rock, Paper Shotgun has bestowed on AI War: Fleet Command not once but many times is something that still amazes me. Being noted as their 2009 Game of the Year is an incredible high water mark for me.

And then I take a look at the list of other six games that they chose to curate for their list. And holy @#$#% all over again.

World of Goo perhaps stands out to me the most, because in 2008 it represented a sort of “indie platonic ideal” to me.  I had yet to release any indie games whatsoever, and I was only just discovering that my lifelong hobby (dating back to the early 90s) might suddenly be a viable career.  World of Goo, to me, represented the unattainable.  Some of my earlier blog posts musing about game design talk about that game a lot.  It was the first “indie” game I ever bought, in the modern sense.  I bought a preorder copy on PC, and then later bought it again on the Wii.

Then we have Armageddon Empires.  Vic Davis’s game came to my attention via the venerable Penny Arcade, where Jerry Holkins had gone on at some length about his admiration for it.  I’ve been a fan of PA since it was only a few dozen strips old, and so when Jerry started talking about any game, it always caught my attention.  Vic has actually made several awesome games; you should check them out if you have not.  Solium Infernum is such a sideways concept for a strategy game, and it continues to inspire me to move sideways, myself.

So, already when I looked at the roster of what games RPS chose to curate, this was not only a history of “highlights of the past seven years of [their] site,” it was already something that represented quite a bit about my own early heroes in indie gaming.

Well, AudioSurf is another with legendary status.

Amnesia: The Dark Descent was more of a contemporary, and one I bought and enjoyed until my nerve gave out.  One of my very favorite games is the venerable Silent Hill 2, and after playing SH2 and then SH1, I thought I could basically handle anything.  SH3 and Amnesia disabused me of that notion. 😉

Then there is Dungeons Of Dredmor, which somehow feels vastly more recent to me than 2011.  I remember hearing so much about it around the time that we were working on A Valley Without Wind (the first one), but I never really had time to play it.  It seems like most of the rest of my staff played it and loved it, though, and so when we started working on Bionic Dues they finally prevailed on me to play it.  And of course I was blown away.  I’m really proud of Bionic Dues, but one of the big goals for me with design there was “don’t be too much like Dredmor, because Dredmor will school anyone who is too much like Dredmor.”

And lastly, we have Teleglitch.  Way more recent, and the only one of the games in this bundle I have yet to play.  But I’ve heard great things, and obviously RPS gives it an enormous thumbs up, so you can’t really go wrong.  It’s now jumped way higher in my to-play list.

Anyway, I have never been known for my brevity, but normally I don’t write such an in-depth post about discount promotions.  This one is special to me for a lot of reasons, but the TLDR is this: because of the incredible company AI War finds itself in, and how and why it was chosen to be so.