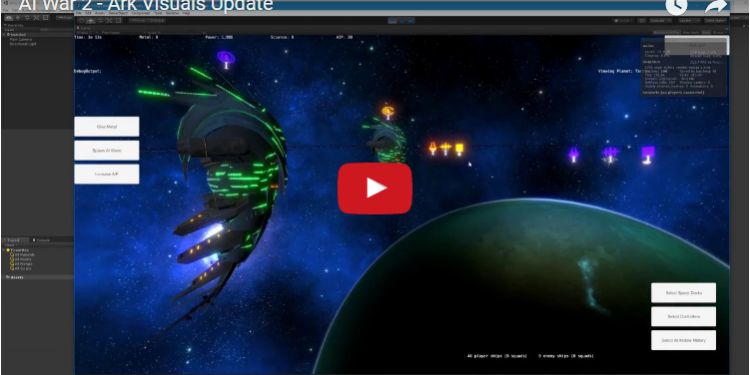 Chris here!  Last update I talked about a variety of random things, and that’s what’s in store once again.  Later this week, Keith will have another update for you in the running series about the AI. 🙂

The Ark Is Finished!

Mostly finished, anyway.  And bear in mind that this is just the first Ark design — something like 8 backers are going to be working with Blue in order to come up with alternative designs for anyone to choose from.  Thanks to those who chose the Arkitect backer tier or preorder item! 🙂

AI War 2 – Ark Visuals Update: January 24th, 2017 — Just a quick look at how the Ark now looks inside the game and inside the prep project.  Sorry I don’t sound more enthusiastic, but my voice is giving out a bit. 🙂

This is a good example of how things have evolved from my original terrible mockup, which I’ll embed here again as a reminder:

Internal Working Videos From The Last Week Or So

If you want to see these dev-diary style videos as they come out, there’s a playlist for those right here on youtube, although we’re not having all these videos popping up as “new videos” on our main channel (they’re unlisted to not clutter things up).

Tutorial – AI War 2 Texture Quality Import Checking: January 19th, 2017.  Notes for Cinth on how to check after me to make sure I haven’t fudged up the import settings on any files.

Also it just plain documents how the ideal file import settings should be, which is pretty useful for modders making their own asset bundles in the future.

Plus I have a random epiphany part-way through there regarding my shader, and there’s a variety of discussion of the pros and cons of some of the past performance of importing of textures in our 2D games.

Tutorial – AI War 2 Setting Up Ship/Structure Models and Gimbals: January 20th, 2017.  Notes for Cinth on how to take a model/prefab of a ship and in the prep project, set up a gimbal for it (along with all the other scripts and whatnot), and get that into the game for use.

Also covers the general xml setup, and collision boxes and so on.

As an aside, this is honestly quite useful for modders, too, although the video is overlong for that.

AI War 2 AI Master Controller Initial Mockup For Concepting: January 23rd, 2016.  Visual mockup for Blue (artist) of unpainted model of my rough concept for the AI Master Controller for AI War 2.  This is incredibly unpolished and unoptimized and is meant to be a bit of a “throw together some legos as a 3D concept” sort of thing.

She then takes it and makes it into something that is actually awesome, though this will probably be in the game instead during most of the alpha since this one is a really large undertaking and there are better ways to spend her time in the meantime.

Warning: this is very much “how the hotdog is made” in terms of the nature of the video!

Tutorial – AI War 2 Getting To Projects (For Devs): January 23rd, 2017.  Notes for Blue and Cinth and other staff/contractors that may need this, on how to get into the unusual structure of AI War 2’s internals and get to an actual project that runs and that can be tested in.

There isn’t any confidential information in here, so hey why not let kickstarter folks see this, too, if they are interested.

Tutorial – AI War 2 Model And Texture Import: January 23rd, 2017.  Notes for Blue on how to import her models to our specific prep project area, and also how to use the values in my custom shader.  This is actually super useful for modders, come to think of it!

Tutorial P1 – Ship Optimization And LODs In AI War 2 (Prototype ships): January 30th, 2017.  Notes for Cinth on setting up LOD groups and otherwise optimizing the ship LODs for prototype ships for AI War 2 to keep the framerates high during the alpha.  Later tutorials in this series will cover handling the actual final ships, which take more work.  This is the basis under all of them, though.

That’s It For Now!

Keith will have his update later in the week on the AI, as I noted, and then next week I should have a new combat video for you, I expect.  Lots and lots of stuff is happening, and I’m really excited about that evolution that we’re seeing.

We look to be properly on schedule for a release to the alpha players in very late February, based on how things are going.  Definitely good news!