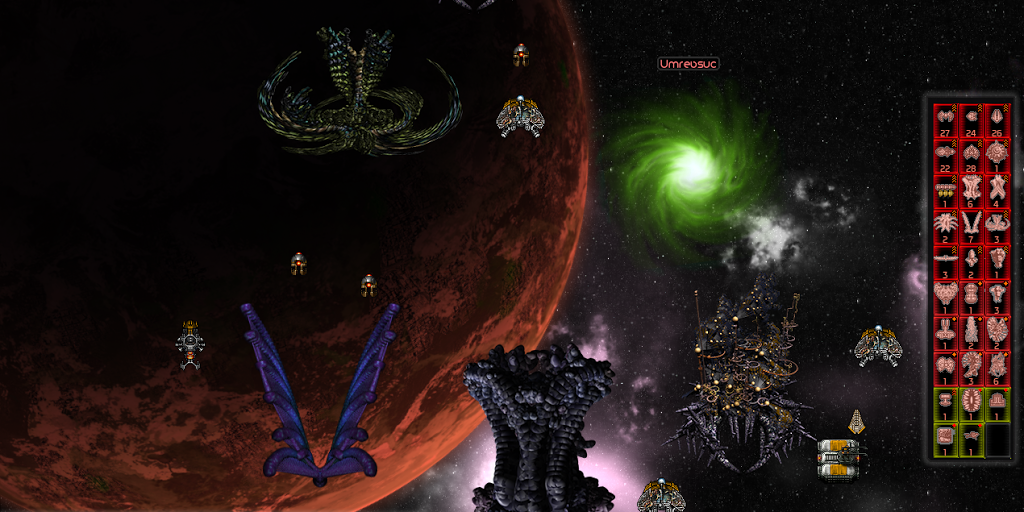 Today’s release is a major one.  Really, really gigantic.  Not because it adds any new ships or features, but because it really polishes the balance and difficulty — including fixing some nasty bugs — to such a heavy degree.  Let’s see, where to even begin:

In the prior version, the economy costs weren’t working properly, repair costs and times were often 10x too high, and so forth.  This made players feel like they were poorer than they should have, rather constantly, and was a huge issue for enjoyment.  I suppose that’s what we get for introducing such a brand-new economic model under the hood (to enable the performance profiles) a couple of releases back. But now all seems to be well here. 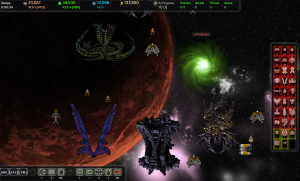 The next really gigantic issue fixed in this version is that of the balance with scouting.  See, AI ships were deserting their guard posts to chase after scouts, which we’d never intended — and they were breaking out of special forces mode, too, which was also unintended.  This led to situations where you were perfectly safe in the last release if you just sat at your planet (well, aside from occasional waves), but as soon as you started scouting you were likely to be swarmed by high-level ships and brutally murdered.

This led to some folks in the forums thinking that this was the new intended difficulty (and alternately despairing or rejoicing), but that’s totally not the intent.  Amusingly, some people felt it was too hard only until they “got the hang of it” and were able to survive on their home planet for more than 30 minutes.  It was totally too hard even then, folks — the risk of loss in the early game is supposed to be minuscule, and you should be able to take a planet or three in the first hour with very little trouble.  But that hour is important, as you’re setting yourself up for later in the game, and the mid-game is harder or easier based on those early decisions you make.

A number of other balance shifts are in this version, in support of that.  There are no more guardians on planets adjacent to the player home, for instance — gives folks a little more time to expand easily, and starting next to a mark IV world isn’t so much extra harder now.  We also did a lot of rebalancing in general, making starships less durable, rebalancing fleet ships all over the place, making harvesters more durable, etc.

Also — and you’ll love this — now you start with a bunch of mark I turrets and starships unlocked.  It’s a real smorgasbord, and lets people experiment with a variety of turrets and starships without having to spend knowledge to do so.  Then if they find something they like, they can invest with confidence in the higher-mark levels of them.  This also helps with the balance against guardians and starships significantly, as the siege starship is pretty crucial to have against some of them. 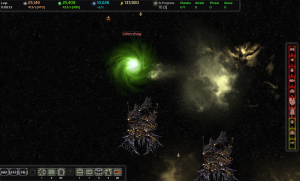 In the screenshot above, you may note that you can now see the wormhole guard posts (that’s what those new, wicked-looking structures are).  Wormhole guard posts aren’t new, and all-in-all they don’t even function that differently now, but the main thing that has changed is that you can see them and shoot at them (and they have a tiny little pew pew shot back at you).

This should help to ease a lot of confusion about when and why wormholes are getting reinforcements (guardians and otherwise), and it makes it more clear why there are extra guardians at each wormhole when you’re playing against a defensive-type AI (there are more wormhole guard posts, is why). Along with this, there were a couple of bugs with too many guardians spawning at individual guard posts, too.  That’s also fixed.

And of course there are a variety of other random fixes and improvements, ranging from stuff with the UI to the fact that there is now only one “settlement” (instead of three) on the human home planets.  Oh, and there’s an awesome new Reference tab in the Stats window, which should be very handy. 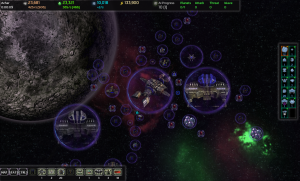 This is the last week of beta for us, so be sure to keep those bug reports coming!  We want to make sure that this has about the same level of challenge as 3.0, rather than being so hard as it’s been lately (or so easy as 3.189 and similar were).  I think we’re getting enormously closer to the right balance with this one.  It should be a lot more fun to actually play! 😉