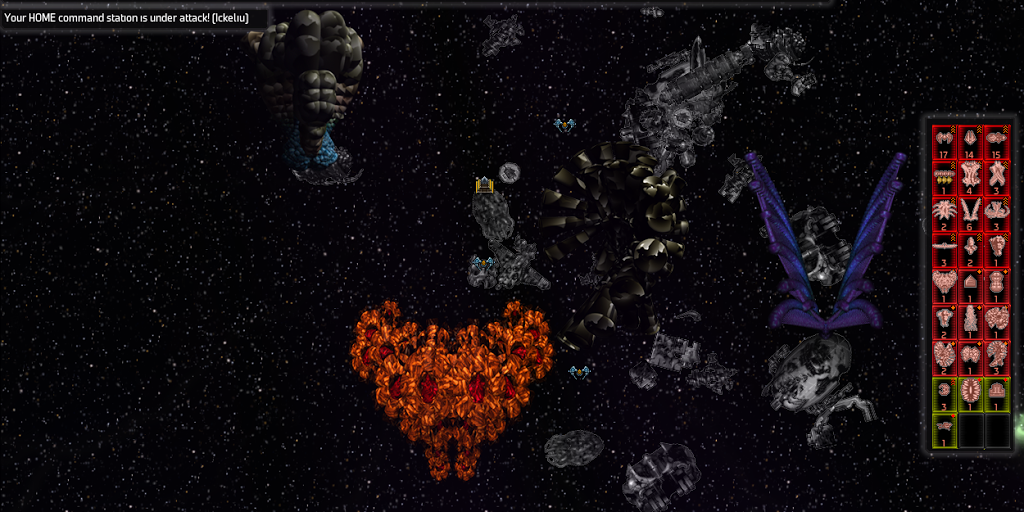 Today’s second release is a substantial one.  The memory-usage improvements that Keith has put in place for the AI thread alone are really significant, as this lets the game skip for garbage collection vastly less often which means that the music/action doesn’t skip even every 26 seconds or whatever we were up to before.  That’s pretty sweet.

There are also five marks each of two new AI Guardians: Laser and Raider.  These are the last of the AI Guardians that will be in for the 4.0 release, and they both add new flavor to the Guardians and their ability to counterattack you.

Even better, there are now five marks each of new AI Carriers.  Normally when the AI has an excess of units it puts them into a barracks on their planet.  However, if they now have an excess of units and already have a barracks on that planet, they’ll instead pop their ships into a carrier and send it toward your homeworlds!  The carrier is feisty on its own, but when it dies all the ships inside it come pouring out.  This is essentially the AI counterpart to the human transports, and — like the human transports — the carriers pass through force fields, cross minefields without harm, and are immune to tractor beams.  Tricky!  These naturally only show up in the late game, of course.

There are also new AI Eye units, which basically act as a de-blobbing agent.  If you gang up all your ships into one massive blob and go after a planet with an AI Eye on it (which are more frequent at higher AI difficulties), prepare to be cut down to size.  A lot of the recent changes to the game are really intending to make it more of a guerrilla-style raiding game in most cases, with the AI seeming a more formidable opponent throughout the whole affair. 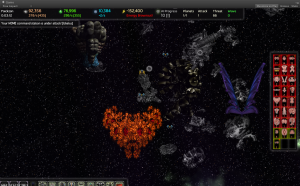 These new ships represent the last ones that will make it into the 4.0 version (the Hunter/Killers that we’d wanted to get in place will have to wait until after 4.0, though they are partially implemented already — there’s just no time for balancing them properly).  Our official release of 4.0 is a week and a day away (the 25th), and we’ve got a lot of stuff to fix and balance in the meantime — actually, before the 21st, where possible, as we have to get our files to the distributors by then.

At the moment, there are a number of fairly severe balance issues with even 3.717, but those are being whittled down and now that the feature-set has stabilized it will be a lot easier to blaze through them.  Admittedly we wish we had a little more time, but our financial situation means that we definitely have to make that cutoff, and so we’re determined to do so with our usual commitment to quality.  And development on AI War never stops, so we’ll be packing in more new stuff after AI War 4.0, too.  Speaking of, there might just be another expansion waiting in the wings to come out a couple of months from now… more on that later.

This new 3.717 release also includes some new balance changes in favor of the humans, with the guardians getting a bit of a nerf, and the human economy from the home command stations getting a 50% boost.  However, I just got out of a playtesting session and I can definitely say that this doesn’t stop the game from being hard even right at the start.  Scouting stirs up AI ships so much that it’s basically suicidal at the moment, which we obviously will fix, but more balance is also needed on the guardians and the player arsenal, etc.  A lot of that will be coming tomorrow and Monday, and I’m confident that we can hit something that is pleasantly challenging while not being insta-death.  Keep those bug reports and suggestions coming, folks!  That’s been absolutely crucial for us so far.