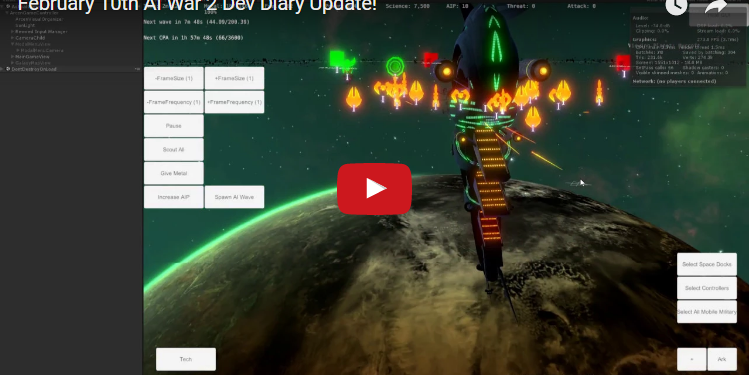 Obligatory: 106 of you still have yet to send in your surveys, so please do that soon if you have a chance.  Thanks!

In this one, recorded just moments ago, I walk you through some things that are happening in the game right now:

The count of working-videos style things in our dev diary channel has grown a lot, and so the dev diary channel is now up to 25 videos as of the moment.  Mostly it’s of a semi-technical or technical nature, but if you’re in to game design there’s some cool stuff in there.

Alpha: End Of This Month!

We’re looking quite on schedule for that. 🙂  No promises on how horrible the GUI will still be for the first build for you alpha folks, but a lot of the visual stuff will have been filled out further by then.

Multiplayer, Linux, OSX, and Windows will be available from day one of the alpha.

If you have trouble running the game on your system on day one for performance reasons, then I’ll go ahead and say right now — please TELL me!  With you alpha folks, I’m particularly counting on that.  I have four good computers representing a range of capabilities for me to test on, but there are always surprises.

In response to those things I can both optimize in unexpected places as well as providing toggles for simply turning off some visual whiz-bang bits for machines that can’t handle those bits.  But I’m definitely counting on you alpha folks to tell me rather than just assuming it will get better without saying anything! 🙂

We’re still looking great for the Early Access launch at the end of May, too, and of course well before then the GUI will be massively cleaned up and improved.  In large part thanks to feedback from the alpha folks, I have no doubt.

And yep, the “sometime in October” schedule for 1.0 is still holding steady, too.

Our production of ship graphics has been substantially slower than we desired originally in terms of the final models, but we’re also putting out much higher-quality work than we originally expected.  In my original pitch for 3D with this game, I never expected to be doing fully-painted models, but we figured out a way to do so (and thus massively improve the look of the game) without completely destroying the budget and without sacrificing much in the way of performance thanks to LODs.  It’s a worthwhile improvement that I’m footing the overage bill for.

Things are going well!  We’re still somewhat in the “measure twice, cut once” phase of things, so I always feel like it looks like less progress than it really is.  If you saw the number of code changes and improvements each time, and the amount of productivity and performance improvements each go… well, I wish I could show that in a visual way, but I can’t think of a good one. 🙂

Nonetheless, my list of “things that are not all that visible but that are very important to do” is getting very short now, while the list of “things that are definitely visible” is starting to get some hefty bites taken out.  Lots more of that to come next week, and the week after… and then we’re into the start of alpha, so you can expect floods of release notes as per usual with us.

Thanks for watching and reading!
Chris