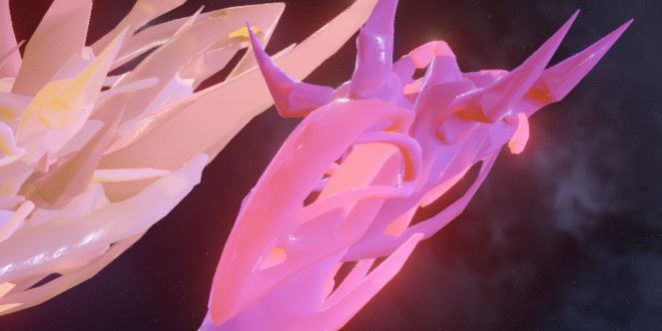 This one has a ton of stuff in it.  The core focus for me, personally, was on making the last things more attractive that we’d need for our upcoming trailer, as well as to get the main menu improved so that it makes a better first impression.  The menu itself still needs better button visuals, but look how pretty (in a highly dithered gif):

We also got some more voice acting work done in preparation for the Early Access launch, although it’s not implemented yet.  And some of the worst of the sidebar glitches are now fixed (though there are still numerous more there to fix, as well as some key bugs elsewhere to fix — I will be getting to those soon!).

You can now click wormhole names to go through the wormhole, which I know is something that people have wanted for a long time.

A variety of balance changes are in, including turrets getting nerfed and guardians getting buffed.  Fewer guardians go along with waves now, and Arks do a lot more damage.

Several ships have real graphics now that did not before.  Such as the spire!  They use subsurface scattering and are colored now, rather than being ugly white: 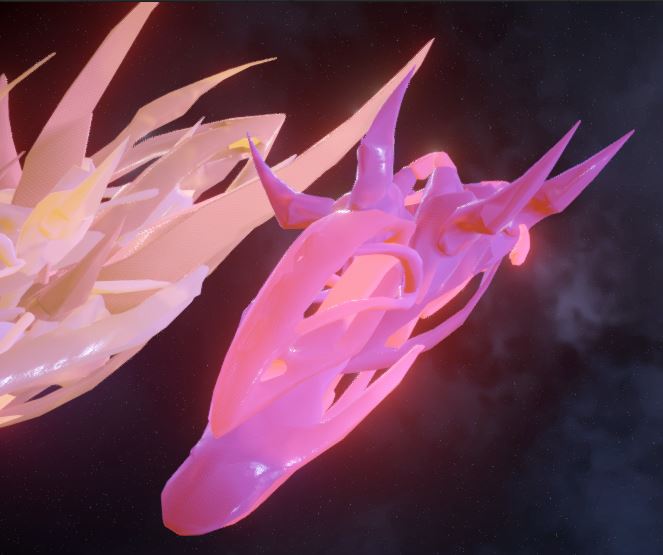 They went from some of the ugliest units to some of the prettiest.  They have new models, too.  The sentry starship also went from very hideous to really really cool looking, too.  Those are what you can see moving past in the main menu now, actually.

There are two new AI types, and various changes to the AI types in general.

The bug with schematic servers having a bunch of duplicates is fixed.

And lots more!  Badger and Puffin were really busy on this one, and Craig was working on audio editing in addition to his work on the trailer, and Eric worked on tidying up tons of the voiceover writing as well as writing new ones, and Quinn put in several fixes including the garbled background story placement.  So many people helping out — thanks everyone!

Reminder: RocketAssistedPuffin has stepped into a volunteer balancer role, and he is not only looking for feedback, but he’s actively integrating lots of things that other people are suggesting on our forums and Discord, as well as things that he’s finding and coming up with himself.  The more feedback the better, for sure.

Also: Would you mind leaving a Steam review for some/any of our games?  It doesn’t have to be much more detailed than a thumbs up, but if you like a game we made and want more people to find it, that’s how you make it happen.  Reviews make a material difference, and like most indies, we could really use the support.