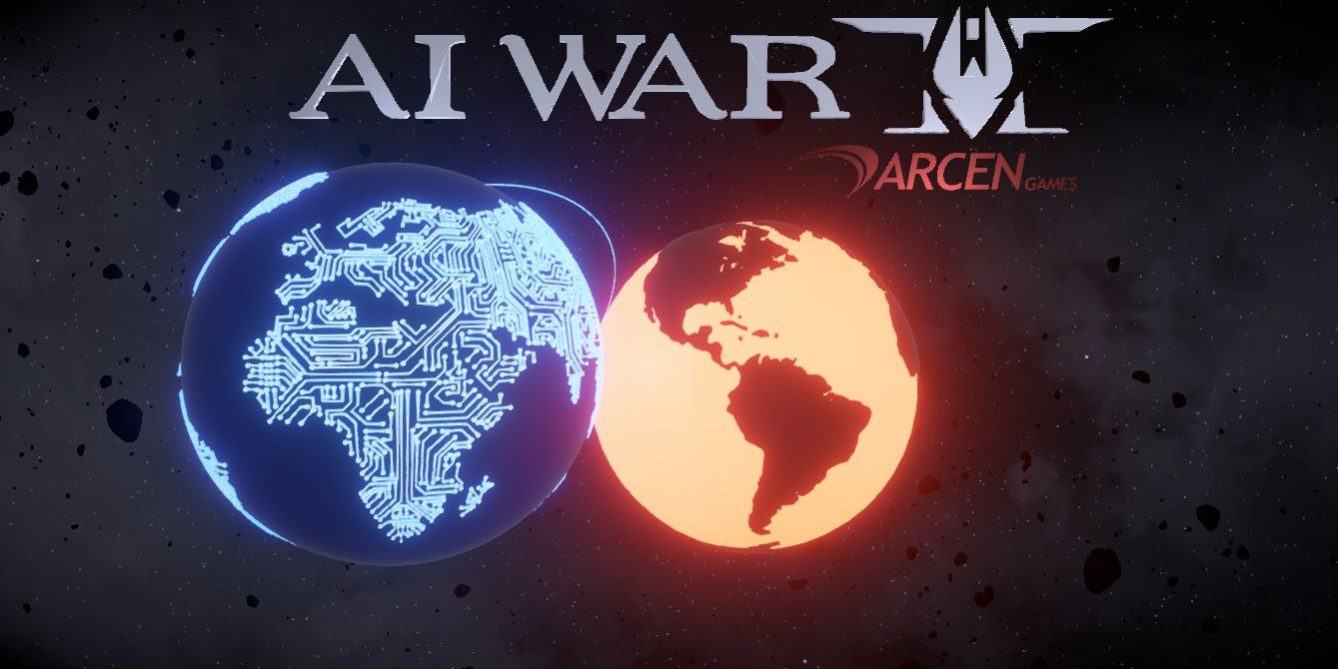 Progress report! The rest of the staff haven’t even seen this in actual practice yet, since I can’t check anything into our source control since this overhaul temporarily breaks EVERYTHING. But it’s an amazing new experience coming up based on these changes, plus others not yet shown.

Actually if you’re curious, you can check out my trello for some more details on what is coming: https://trello.com/b/tz2k8Q15/chris-ai-war-2-todo

New main menu! I was tired of that ship going by, and didn’t want some generic battle or other ship just sitting there. During the kickstarter, I really liked the red and blue planet aesthetic that we had going on, but it was highly unrealistic of course.

But that got me thinking about doing something more stylized: a blue circuit-boardy or borg-like planet (wound up going with the former) that is larger and more sedate feeling, and then a smaller and more burned-out or desert version that is glowing more red (wound up going with the former). The one represents the AI, the other the humans, and in both cases it’s showing how Earth sentience has symbolically moved on and lives on even though Earth itself was destroyed. I particularly like how the human planet almost crashes into the AI one, but just barely misses.

The symbolism of the asteroids rushing past the two planets is hopefully also obvious. I thought it was just a neat thing to do, and it seems very appropriate for the game and like something that would be mesmerizing just to sit and look at, which is always fun. When I added the little blue satellite line around the AI planet, that really brought that part together for me.

The Verdict On Shields/Forcefields (For Now)

Shields/forcefields are indeed gone for now, although we might bring them back in a limited capacity on the human side only.  So far that doesn’t seem to be needed, though, and that’s largely because of the impressive new power of tractor beams and turrets, and some of the new gravity mechanics that you can get a bit of a hint of in the new sidebar, above.

Anyone With Trailer-Making Skills Want To Help Out?

We’re running at full capacity even with awesome volunteers helping us out in a variety of areas.  We already have two trailers in progress at least conceptually (one in practice), but we’d really like to have at least a third in order for the game to be presentable in a variety of ways that people might find appealing.

I recall that Minecraft had a trailer-making contest and they had people who made way better trailers than either some marketing firm unfamiliar with the game could, or the developers themselves could.  I can’t really offer a bounty or anything on that, but if there are folks who want to come explain the “AI War experience” in general in trailer form, please feel free to email me at chrispark7 at gmail.

Oh, the other catch on that: we’re running low on time (about a month and a half until launch), and the visuals aren’t going to be fully finalized for another few weeks.  !Fun! 😉  Such is life, though, and at least the game itself is coming together really fantastically.

Obviously any of you can play the game right now or tomorrow or the next day, if you want to.  But we’re trying to get to a state where we can invite a huge number of you in and have you have a good and coherent near-final experience with the game, balance aside.

We’ll need your help figuring out where balance breaks down, because the game is huge and people have wildly divergent playstyles.  Plus it will be more bughunting time that then Keith and I can spend fixing issues from.

We’re not there yet, but one of the main things holding that back is the introduction of the new GUI, which is finally coming along.  Eric designed that much faster than I was able to implement it.

Anyway, please do stay tuned on that front — we hope to have a couple of dozen of you come in and really hit this thing hard during the beta.  Out of the few thousand of you that currently have a copy, surely we’ve got a few dozen for that… 😉