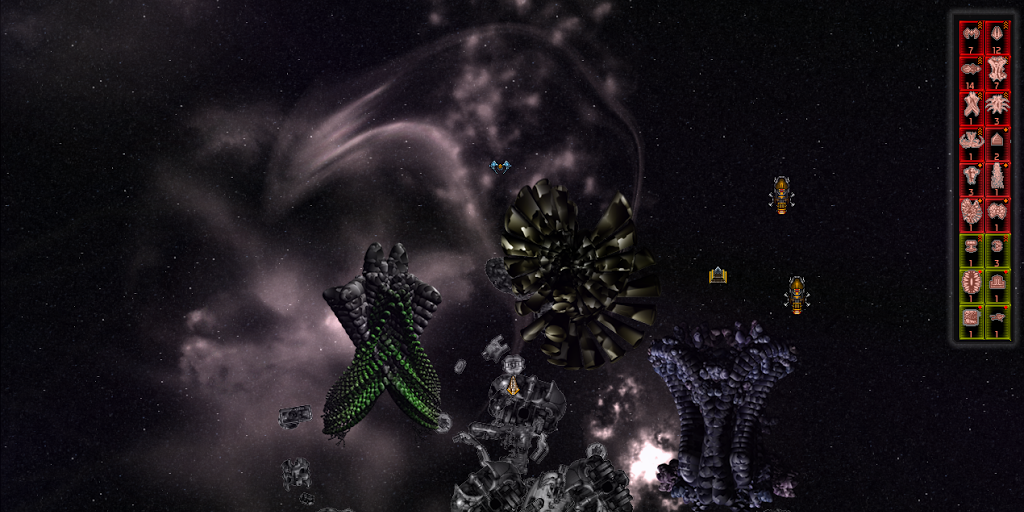 At long last, AI Guardians have arrived!  The first 40 of those ships (5 mark levels each of 8 ship classes) are now in, and a couple of them are pictured below.  These are basically overlarge, fairly slow, and fairly powerful ships that guard guard posts and command stations — until provoked.

In a lot of respects, they fill the same niche as turrets used to for the AI (the AI no longer gets any turrets, if you’re just joining us), with two key differences: a lot more firepower is concentrated into each guardian; and the guardians have the ability to go on the offensive when you make them angry.  That’s hugely important, as it makes the counterattack risk from attacking a planet inherently higher. 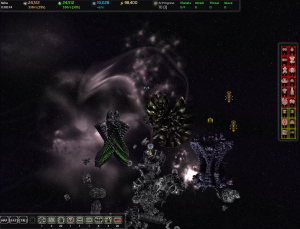 Also in this release are some key changes to starships, and how the AI uses those.  You’ll be seeing at least one starship in every offensive wave now, which is one big difference.  Additionally, the AI is now able to use starships in more than just the “planetary roamer” mode that they normally have been.  This allows for attacks and retreats from starships, without those starships deciding to stick around permanently on the first AI planet they run into.

There are, of course, also a number of bugfixes.  The issue with the high threat right at the start of the game on lower-than-high unit cap scales has been fixed.  Additionally, we fixed the longtime issue of having at least a tiny bit of threat right at the start, simply by funneling those units into special forces during the first 60 seconds of the game.  So not only is the core bug fixed, but there’s now a safety value of sorts in place to keep it from happening again. 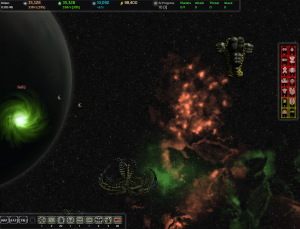 Also, a lot of the window/dropdown/tooltip height positioning issues have been fixed, with great suffering, by Keith.  The z-indexing model for windows in Unity leaves a lot to be desired, and the documentation of that z-indexing model leaves even more to be desired, but Keith persevered and found a solution at last that seems to resolve all the issues.  He’s asked me to relay that any more bug reports relating to window draw order are risking bodily harm. 😉

Oh, and by the way — the turret caps are higher again.  With the starships and the guardians the way they are now, you’ll need them.