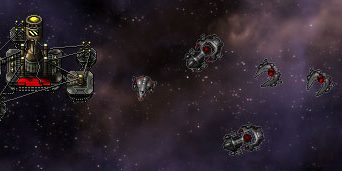 Arcen Games is pleased to announce the release of AI War: Fleet
Command version 1.201. You can download a trial version
of the game, as well as purchase
a license key to unlock the full version. If you already have the
game or demo installed, just hit “Check For Updates” inside the game to
get the latest patch.

– Major visual improvements — planets and backgrounds, some
effects, parts of the HUD, and a few ship classes.

– Massively updated economy that is easier to manage and which
scales better to very long games.

– New Energy model that provides more incentive for expansion while
also fitting within the updated economy.

– Faster Starts:  The repetitive activities from the first 5 or so
minutes of a new campaign have now been automated to let players get
right to the real game.

– Revamped cross-planet attacks that are better balanced for
players.

– A good number of performance improvements make giant battles
perform better than ever.

– Improvements to the interface in general, most notably the
planetary summary upgrades and the addition of the Threat Meter at the
top of the screen.

– Drag-building of ships is now possible, and placement is even
easier with Ctrl and Alt hotkeys while placing ships.

– Many smaller balance tweaks, ship logic improvements, and other
minor enhancements and bugfixes.

The above list is just a sampling, however, so be sure to check out the
full release notes to see everything (included in the next post in this
topic). This DLC release was so massive that it was a month in the
making.  Expect our next DLC release to come sooner than that, but the
exact timing is going to be dependent on how much testing is ultimately
needed for new features.  You can always get the latest public
prerelease beta versions from our forums if you’d like to see what’s
coming down the pike.  Lots more exciting updates are on the way!

As an added note, if you are a player who is is unable to
install patches for whatever reason (this is usually a windows issue),
you can download the patch files through the following link: http://www.arcengames.com/share/AIWar1000To1201.zip

Then
unzip it into your game folder (usually C:Program FilesArcen GamesAI
War unless you specified something else).  Please make sure that your
unzip process keeps the folder structure from the zip file, rather than
just unpacking all of the files into the base target directory.  This is
a cumulative update, so as long as you have at least version 1.000 of
the game installed, this will update you to the latest version (1.201)
without any issues.

This update is also available directly
through Stardock’s Impulse for customers purchasing the game through
that platform.

For existing GamersGate customers, you can always
upgrade your copy from the “Check For Updates” link in the game just
like customers from our direct site can.  The latest version of the
installer will also be coming to GamersGate, but that will affect new
customers only.