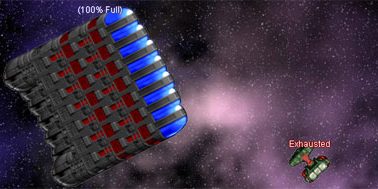 Arcen Games is pleased to announce the release of AI War: Fleet
Command version 1.007. You can download a trial version
of the game, as well as purchase
a license key to unlock the full version. If you already have the
game or demo installed, just hit “Check For Updates” inside the game to
get the latest patch.

More Free DLC: A new transport ship (shown below) can now be
unlocked from the DEF tab of your command stations.  This transport is
hugely useful for ferrying your weaker ships past heavy enemy defenses
(across minefields, past ion cannons, etc).  Transports can also be used
for ferrying teleporting ships between planets (very useful, since
teleporting ships were previously locked to their current planet).

In addition to the new ships, this release also contains another large
batch of improvements, tweaks, and extensions based on player
suggestions.  Here are some of the highlights:

– Music streaming has been improved, which speeds up loading
savegames and the game itself.

– Suggested paths between planets are now much better.

– Harvester ExoShields have been made more useful.

– Fighters have been rebalanced, making them more useful.

– Overzoom is now an option.

– Efficiency of drawing hundreds or thousands of ship attack ranges
is now much better.

– Multiple constructors can now be managed at once (space docks,
missile silos, etc).

– It is now possible to issue commands to ships still being built
(which they will execute after completion).

– Galaxy maps as small as 10 planets are now supported.

– A new Auto AI Progress option has been added, allowing game pacing
to be greatly adjusted.

– Performance in very active games with more than 80,000 ships has
been greatly improved.

The above list is just a sampling, however, so be sure to check out the
full release notes to see everything (attached at the end of this post).
More free DLC will be heading your way next week. Enjoy!