A Valley Without Wind Embarks On Final Beta Phase

Arcen Games is pleased to announce the downloadable PC/Mac title A Valley Without Wind — our fast-paced, open world sidescroller of nearly limitless proportions — has entered its final beta phase, with an official launch now in sight. To celebrate, a brand new trailer for the game has been released (best viewed in 1080p), along with 18 new screenshots and updated demos as well.

With the game’s community heavily involved in the beta so far, the game has seen an astronomical number of changes and improvements added by our relentless programmers. Thankfully after a whirlwind of patching, the game’s dust has settled, and we welcome everyone to take a look around at what the world of Environ has evolved into.

The mechanics have been streamlined, a fully fleshed-out player experience is now in place, and tons of new content has been packed in — including a variety of new missions, spells, armor enchants, guardian powers, and more. Multiplayer has also come a long way, and players are having a blast running their own beta servers. There are a few multiplayer remaining bugs to iron out prior to 1.0, plus the need for a server browser, but it’s already a satisfying experience.

Beyond all that, the game has become much more accessible to new players. A planning menu complete with handy ‘supplies’, ‘things to do’, and ‘where to find stuff’ sections; opt out popup tooltips; and other improvements to usability and clarity result in a newfound flow to the title.  Players who are returning after a long absence are heartily encouraged to play through the game’s intro mission, given how much has changed.  If you’d like to know more before you play, or just have a fetish for external manuals, check out our Learning The Game section on the A Valley Without Wind Wiki.

There’s still so much to come for AVWW, both prior to 1.0 and after! Our head designer Chris Park states his vision for the game going forward on his devblog:

“Our plan is to take the AI War route, and release tons of free DLC as well to do at least a couple of paid expansions.  Hopefully in 2-3 years, we’re still developing both AI War and AVWW — that is the ideal scenario for me personally.”

About A Valley Without Wind

The full beta version of A Valley Without Wind is available now on PC and Mac for pre-order at a substantial discount from the game’s official launch price. Customers gain instant access to the latest available build and all subsequent releases through 1.0 and beyond. The game can be purchased and downloaded directly through the developer as well as on GamersGate, Impulse, and MacGamesStore. A demo is also available, and grants full access to the game/multiplayer with the only some tier restrictions.

AVWW is currently in beta and as such is constantly in development. It continues to evolve at a rapid pace, with new content and improvements added nearly every weekday as it progresses toward official launch in late March. Follow the game and its updates/discussions on Facebook, Reddit, and Twitter. To get more involved with how AVWW evolves in any and/or all of its aspects, or to find populated multiplayer servers, be sure to stop by our forums.

Arcen Games entered the PC indie scene in 2009 with their cult classic AI War: Fleet Command, which was named the 40th best-reviewed PC game of the year by MetaCritic. Their second year was a busy one, seeing the release of The Zenith Remnant, the first full expansion for AI War; Tidalis, an innovative block-based puzzle with casual appeal and hardcore depth; and Children of Neinzul, a micro-expansion for AI War with all profits benefiting the Child’s Play charity, of which Arcen is a platinum sponsor.

AI War’s third and largest expansion Light of the Spire marked Arcen’s first release of 2011, and now the company has shifted its focus and excitement to the development of A Valley Without Wind. Originally a one-man shop, Arcen Games has grown to have half a dozen part-time or fulltime contributors to its various titles. For all the latest news, media coverage, and some of our other musings, follow us on our developer and individual game pages on Facebook or on Twitter: @ArcenGames.

Chris McElligott Park February 29, 2012
As you journey through your own unique world of Environ, you’ll primarily be splitting your time between exterior landscapes, building interiors, and underground caverns. Not only that, but you’ll be traversing shards of nine different time periods, ranging from the prehistoric, to medieval, to modern, to far-future. Each has a very different feel, often different enemies, and often unique rewards.

A lot of the fun of a game like this comes from simply exploring it and seeing what cool things you can find. So we won’t provide an exhaustive spoiler-laden list here, or attempt to show everything. We’ve already had players who have sunk dozens or even a hundred hours into the game, and they still haven’t even seen everything that the game contains. A big part of that is because the game is always evolving through ongoing updates that add more content, new features, and more polish.

Here’s a few specific snapshots to give you an idea of what you might encounter on your journey. All of these are full-resolution (no downscaling, no JPEG or video compression, etc), just cropped down to make them fit in to 600px wide:

Fighting A Blue Amoeba In An Underground Cavern
As you progress, you’ll actually start running into the even-more-deadly red amoebas, so watch out! This is also a relatively close-to-the-surface underground dungeon; as you delve further underground, the number of wooden platforms decreases, the monsters become tougher, and eventually you’ll find yourself in a heated lava climate. 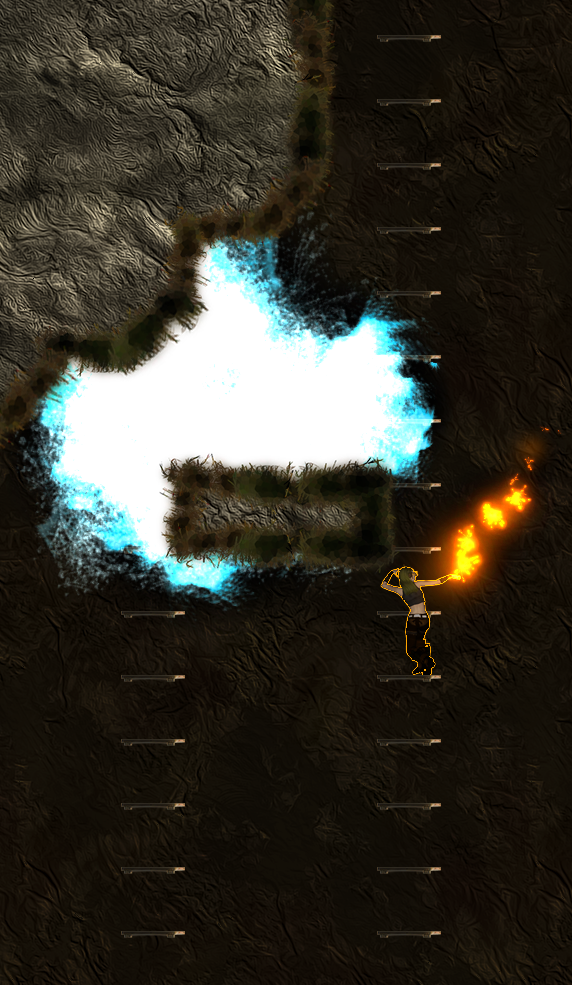 Destroyed Room
This is an example of a destroyed room in a modern building. There is never, ever, anything interesting in these; and they are marked with really decrepit-looking doors so that you can see to ignore them. Why have bombed-out rooms? Because players — including us — hate doors that your all-powerful magical character mysteriously can’t open. It’s like the chain-link fence kryptonite joke. At any rate, in the wake of the cataclysm, buildings are in varying states of destruction — some are all but impassible, others just have a few clocks knocked off the walls. You can go into any room in any of the buildings, but the bombed-out ones are items you can easily (and happily) mark off your exploration list. The spell shown is Douse Monster Nest, by the way. 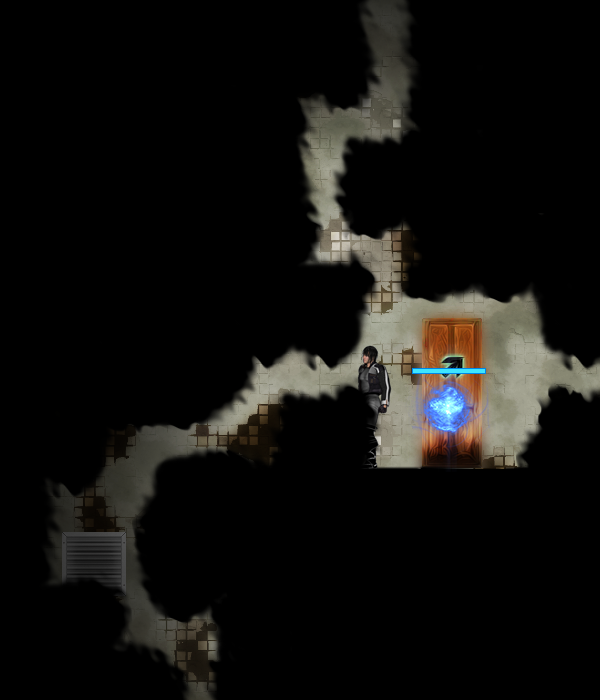 Clockwork Probes
The industrial age in general follows a very steampunk style, and that’s where these hail from.  Seen here in the rural grasslands, these probes will take a real beating before going down. And they hit back hard. 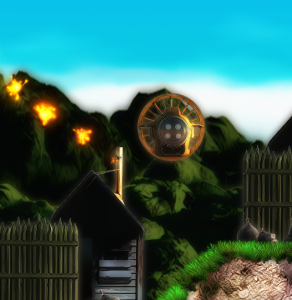 Meteor Shower
Some of the spells you can learn are completely devastating. Meteor Shower launches four meteors into the sky that come back down, crushing your enemies. Be mindful of the powerful spells, though — they can be a severe drain on your mana.

Desert Battlefield
There are a lot of forces at work against you, and though you normally fight alone, there are times that you’ll need some minions to help you. In this picture is a shot of the player taking part in a battle in the desert. The skelebots shown are actually minions of the player, helping to push back the enemies. 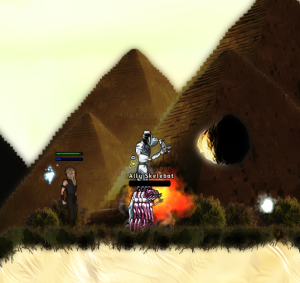 Moon Rising
Even Environ’s moon didn’t escape the carnage of the cataclysm, as you can see. Every 10 minutes of game time is a day/night cycle, although you can accelerate to morning or evening using the Sunrise and Nightfall spells (if you can get your hands on some of the rare sunstone or moonstone, that is).  Every ninety days, the season changes between Dewbloom, Solswell, Ashfall, and Frostmoon.  Solswell has the longest daylight hours, while Frostmoon has the shortest. 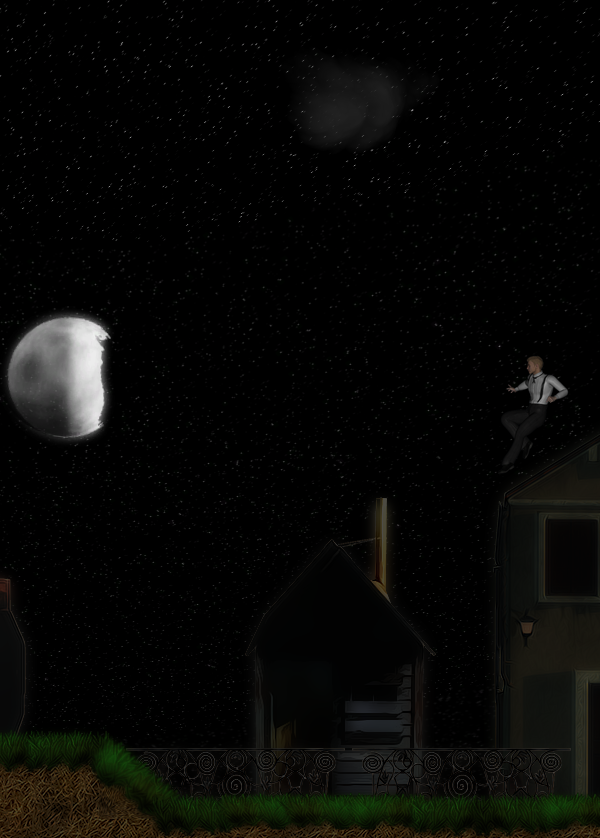 Modern Ruins
Here the player is standing in front of a Modern Ruins building, which can be found in abandoned towns. These buildings tend to have labyrinthine interiors with a lot of good stuff that you will need on your journey. But, with all the rooms, that means there are a lot of enemies to be found as well… 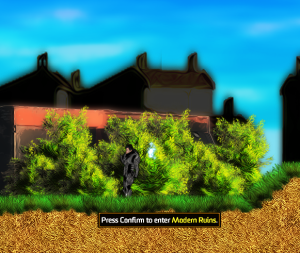 Ice Pirates
Ice pirates are actually classed as an “environmental threat,” and don’t start appearing until your second continent. The pirates are actually visible on the world map, and they will indiscriminately rain down destruction from above on any region in range of them.  Rumor has it that the guardian Ilari are working on a way to get you inside their massive ship so that you can put a stop to their terror… 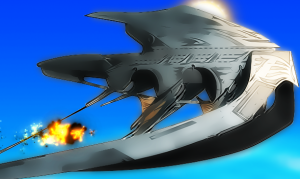 The World Map
Here’s a small slice of the world map, an overhead view that is how you get between the various regions. As you can see, the cataclysm has thrown the time-shards together in a haphazard fashion. The entire continent is roughly the same difficulty — unless you delve into very deep caverns or approach the overlord or his lieutenants — and that difficulty increases up as you complete missions. Eventually, you will have to face the overlord directly.  If you are victorious, then another oppressed continent will become available to you, with even more new things to discover. 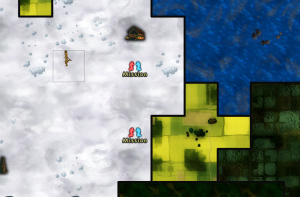 Sapphire Gem Vein In Ice Cavern
Here in the ice age, even the underground caverns are so cold that you’ll freeze to death in under a minute if you don’t bring along a heavy snowsuit.  A couple of Icicle Leaper enemies are guarding a sapphire vein — split that open, and you’ll get a pair of raw sapphire gems.  Gems of all six colors are very central crafting ingredients. 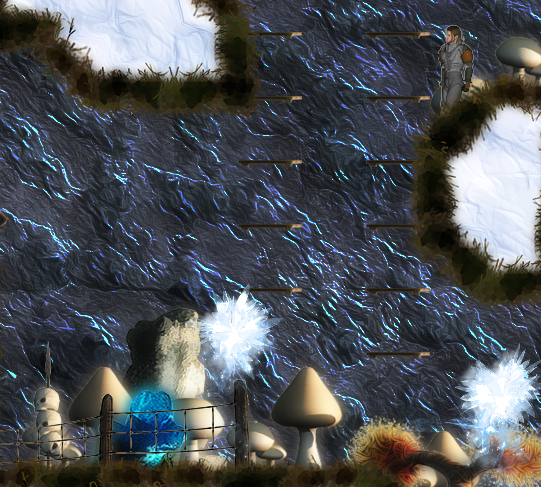 Giant Skelebot
Here’s one of the minibosses from the game: the giant skelebot. He hits you with his spear if you get too close, and he shoots fireballs at you when you’re further away. The giant skelebots, believe it or not, are actually by far the tamest of the minibosses in the game.
But depending on the boss room layout and what regular enemies are spawning to help out, even a weaker miniboss type can give you quite a fight. This is a case where we’re starting to see some combinatorial emergence in the same fashion that we see with AI War battlefields. The way that the environment and various enemy types combine to make emergent challenges is quite interesting! 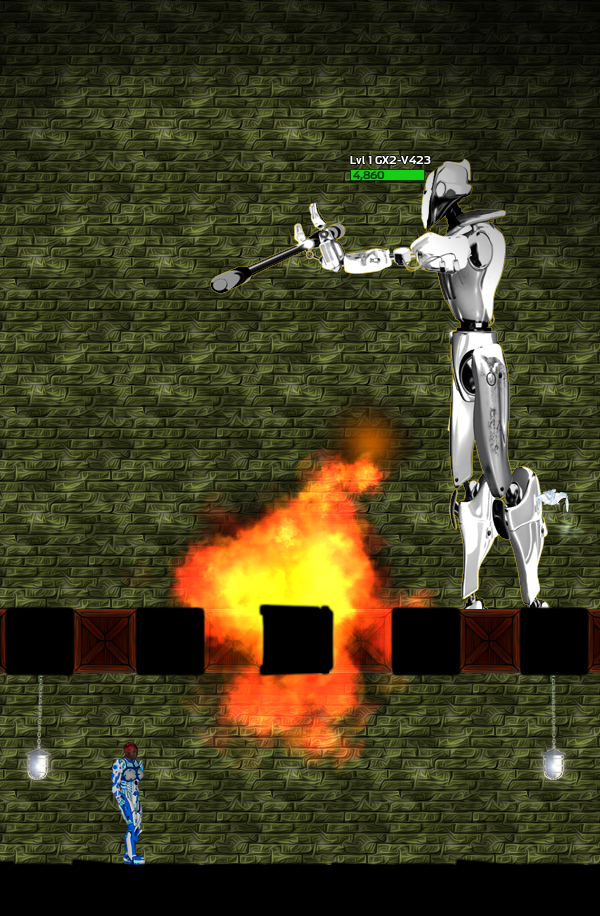 The Above Was Just A Taste!
There are tons of locales, enemies, crafting ingredients, missions, building types, and obstacles for you to discover in Environ.  To give away too much in advance would be doing you a disservice — try out the demo, and if you like what you see, you can keep playing your demo world after you upgrade to the full version!

At last we come to it.   This one is the very last release of beta phase 2, and marks the start of beta phase 3 for the game.  This version includes only some bugfixes and balance tweaks, as well as a change that really will help performance during battles quite a bit (stopping stuttering from background loading that was supposed to be pre-cached).

To reiterate from the last release’s post, here’s what our focus is going to shift toward for the next 3ish weeks until we hit 1.0 for the game:
– Enchant containers working better.
– Add hand-crafted touches into procedural exteriors and undergrounds.
– Walking monster interactions with cliffs to be better.
– Integration of mysteries-to-be-solved into the game (replacing what were memory crystals once).
– Multiplayer server listing and admin controls.
– More enchant-items and enchant-effects.
– More spells.
– More enemies, bosses, and environmental threats.
– More guardian powers, including ones for NPC skill level 4 and 5.
– More mission activities.
– A few more traps and other supplies to find in stash rooms.

More to come soon, including updated installers and more.  Enjoy!