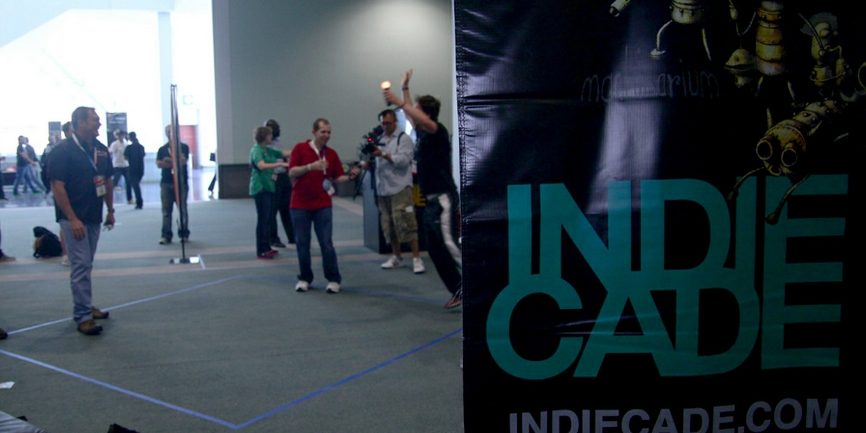 A Valley Without Wind 1.1 is officially out (along with an official hotfix) and we’re happy to hear some really great reactions from players and press, including Tom Chick of Quarter to Three weighing in on what he’s enjoying about the new update.

We’ve built up quite a long list of links over the past couple weeks as our game saw some great coverage thanks to IndieCade’s E3 showcase (Jessica Conditt of Joystiq surprised us with this awesome piece). It was a great group to be a part of, and I myself got to talk to a ton of cool industry folk—several of which checked out and seemed to really enjoy their time with our game.

I also got to check out a ton of cool indie games right next to me. My favorite of which was Hokra by awesome developer/nice guy Ramiro Corbetta. I also had the pleasure of meeting veteran indie devs Erin Robinson and Steve Swink, who we’re showing off their new projects as well. Erin’s working on a clever and fun puzzle platformer Gravity Ghost, and Steve really stole the show with his first person create/modify game Scale.

The IndieCade showcase titles in general were excellent, if you want to check them out you can find the games listed here. With that, here’s the aforementioned list of outlets talking about AVWW 1.1, IndieCade at E3 (some pieces our game is not directly mentioned but we still want to share), and various other press coverage:

Extra Credits: Games You Might Not Have Tried #4 (Video)

GameSpy: Watch Out for these Weird E3 Indie Games

G4TV: Indiecade Invades E3 – The Best of Indie Gaming in One Spot

Gamer’s Guide to Life: E3 2012 — A Valley Without Wind Interview

Indie Game Magazine: IndieCade At E3 — A Quick Look At All 20 Games On Show

Joystiq: Take a tour with us through IndieCade at E3

Turnstyle: IndieCade — E3’s Oasis and Scrying Pool, All in One

Gamasutra: Dust in The Wind: An Analysis of A Valley Without Wind

Indie Game Magaine: ‘A Valley Without Wind’ An “Almost Different Game” With 1.1 Update

DealSpwn: A Valley Without Wind Gets Massive Content Update

Dark Side of Gaming: A Valley Without Wind – Version 1.1 Is Now Available

IZTheJack: A Valley Without Wind Part 10 – The First Rescue

Category: A Valley Without WindBy Erik JohnsonJune 22, 2012Leave a comment