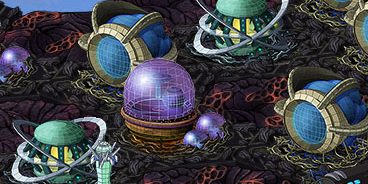 Chris: This was written by Sean Johnson, one of our beta testers for Stars Beyond Reach, and I’ve only added formatting and images.

Sean: I have never had so much fun losing at a strategy game and have certainly never felt compelled to write something about it.

Sean: All seemed well in our budding Zenith settlement of Kulrider. Despite the close proximity of an Acutian settlement, and the pollution that comes with it, we were pursuing a tranquil path of scientific discovery. What follows are excerpts from the personal journals of Premier Zeke I of Kulrider…discovered by me in the wreckage of our once proud city. May these accounts prevent others from repeating our mistakes…

Entry: I was wakened in the night with news that our Acutian neighbors had instigated a war of aggression…against fully half of the known races present on this world! Thankfully, we are not one of them…Yet. What am I saying? Even if the report is correct, and I have doubts about its accuracy, surely they cannot hope to win. They will be eliminated, along with their threat and their disgusting pollution…and good riddance.

Entry: Unbelievable! The Acutians have emerged victorious. How can this be? How weakened are they? Does it even matter? We are in no position militarily to take advantage even if they are devastated. What if they are not devastated…What if we are next? Damn me for allowing my advisors to convince me we had no need for a standing army. That changes…now! I will divert all our resources towards military readiness. Will there be enough time? There has to be…

Entry: The Minister of Health has been pestering me about a meeting for weeks, so I finally decided to placate him so I can be free of his whinging. It seems our fair minister is concerned that his funds for disease research have been diverted to military research. After explaining to him that there has been no hint of any disease since the founding of our fair city, I denied his request for renewed funding and sent him on his way.

Entry: Our newly constructed guard post has been utterly destroyed by some kind of damned subterranean worm…And worse, it seems that the Acutians have been working fervently to reconstitute their military might. This is…concerning.

Entry: The Minister of Health barged into my office reporting the outbreak of some sort of fungal infection. Although the mortality rate is not high, it appears to be highly contagious and the symptoms highly debilitating. I agree to divert whatever funds are necessary to the Minister of Health, but the look on his face tells me that it may be too little…too late.

Entry: Disaster! Our spies tell me that the Acutians are preparing to launch a full scale assault against us. We will be too weak to defend ourselves. Those who have not died in the damned pandemic are too sick to work. Our trained physicians, few as they were, died of disease whilst attempting to cure the afflicted and our military installations are manned by skeleton crews.

Final Entry: This is the end. Only a few hundred of us are left and only a few dozen have avoided infection. I have sent away the last few healthy citizens, for all the good it will do. There are not enough of us left for us to be genetically viable as a species. The Zenith end here. My only solace is that no one will be left to share my name that it be cursed forever more…